The FX limited series Mrs. America tells the story of conservative activist Phyllis Schlafly (Cate Blanchett), as she attempts to upend the movement known as the Equal Rights Amendment (ERA) in the 1970s. Editor Robert Komatsu has been nominated for his work on the limited series, specifically for the pilot episode, “Phyllis.” Komatsu also edited  the episodes “Betty” and “Bella,” but much of the show’s editing style was developed in the pilot, setting up the characters, story, and visual language for the entire series. 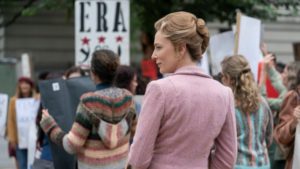 The pilot’s point of view is heavily concentrated on Phyllis and then shifts to the other side to show the two different views at the tail-end of the series. Komatsu explained, “Our showrunner, Dahvi Waller wanted to portray Phyllis as a complex human being with contradictions. Starting this whole series focusing on Phyllis Schlafly was interesting because we’re showing her go through the process of how she’s a woman, how there are limitations in her life, and how she goes through the process of becoming the person who’s going to attack and stop the ERA. At the end of the episode, we have this burst of energy where we cut to the feminist side, we flip the script, show how we’re going to go in the series as all the feminists in the room talk about this Phyllis Schlafly.”

Directors Anna Boden and Ryan Fleck (Captain Marvel) directed episodes one and two simultaneously as the style of the show was developed over those two episodes. The world between the Antis and ERA supporters were both visually shot in distinct ways. The conservatives were shot with locked down smooth camera moves; while the feminist side dealt with handheld, steadicams, whip pans, characters overlapping, and chaotic energy. “There are times that we would really hold off on overly cutting on the conservative side and a lot of it was due to how shots are and designed. Once we get to the feminist side, I was cutting things faster. The actresses in that last scene were encouraged to overlap each other, to improv, to cut each other off. We enhanced that through the editing,” the editor distinguished. 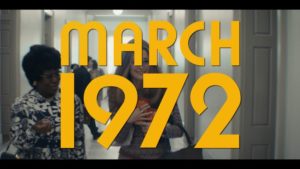 The style for the series was profoundly influenced in part from the type font and the use of split screens developed and introduced in the pilot as they were inserted throughout. “I cut episode one and my partner Emily Greene cut episode two. We came up with how the titles were going to be shown on this show. Our titles are huge, it might say 1971 and that will take up the whole frame that evoked the 70s. Something I did for the pilot was the use of split screens and that truly did influence the rest of the show. There’s the sequence where Phyllis is going to send out her newsletter to all her housewives in her network to help stop the ERA and we were thinking about shooting that as a split screen sequence. I researched different split screens and mocked together various concepts. We ended up landing on something that was not modern or sleek panels with thin lines between them. Ours was chunky, it evoked the 70s more and panels with different sizes scattered throughout the frame with big chunks of black in between. I would make freeze frames from the Barry Goldwater scene and say this shot represents Phyllis typing or her stuffing envelopes. Everyone seemed to really like the split screen, so it started to be used in other episodes,” Komatsu detailed. 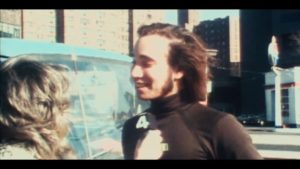 The thought to utilize archival footage was also supplanted by Komatsu as footage was inserted into the first episode with the other episodes following suit. The editor added, “It was another thing that wasn’t scripted. The producers had a theme in mind for each episode. For the episode of “Phyllis”, I got a ton of footage and the commentary about Shirley Chisholm running for president. There was this reporter that got these responses that were short, succinct soundbites. It was really fun to juxtapose their answers and cut that together.”

Komatsu also praised his assistant editor Matt Crawford for his diligent hard work ethic and editing abilities, whom is credited as an additional editor for cutting scenes for the “Bella” episode and fully equipping the “Phyllis” episode to pave the way for the series. Komatsu and Crawford have collaborated on five projects together. 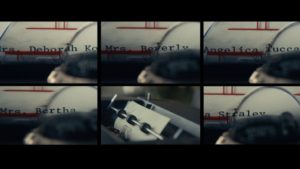 The visual language and style for Mrs. America was heavily influenced by the pilot episode “Phyllis” from Robert Komatsu’s innovative approaches and editing methods from the colossal type fonts, the creative use of the split screens, embedding archival footage from the 1970s, juxtaposing succinct soundbites, and editing the two viewpoints of the conservatives and feminists inversely. Komatsu’s methods created a structure and were continually employed throughout the entire series.

“I was really happy that something that we developed in editing on the pilot really influenced the visual language of the show.”

This is Robert Komatsu’s first Emmy nomination. Mrs. America is nominated in the category of Outstanding Single-Camera Picture Editing for a Limited Series or Movie for the episode “Phyllis.” Other television series editing credits include I’m Dying Up Here, The X-Files, Halt and Catch Fire, Matador, American Horror Story, and Mad Dogs.

Mrs. America has brought to the forefront a renewed awareness to the Equal Rights Amendment (ERA). Only 35 states ratified the ERA by 1979 as a minimum of 38 was required to pass. The latest states to ratify the ERA were Nevada (2017), Illinois (2018), and Virginia became the 38th state in January of 2020 after the expiration of the previously set deadlines. Subsequently four decades later, the Equal Rights Amendment is indefinite and the law-making decisions still proceeding.

December 15, 2016 Staff Crafts, Film, Industry Sector, News, Visual FX Comments Off on Rodeo FX Works Its Magic for Fantastic Beasts and Where to Find Them

Rodeo FX delivered 126 visual effects shots for Fantastic Beasts and Where to Find Them, including many featured creatures and their environments, the magical reconstruction of a destroyed room, and MACUSA – the elaborate headquarters of the wizarding world. Helmed by David Yates, who directed four Harry Potter movies, Fantastic Beasts is a spinoff to the Harry Potter series written by J.K. Rowling. When a wizard, Newt Scamander (Eddie Redmayne), […]

LAFF: Character Thru a Strong Sense of Place

Realistically detailed worlds that define the people that inhabit them were common elements of films at the Los Angeles Film Festival. Expressing not only a diversity of character, but also location, the creative collaboration between directors and their crews was essential in bringing these environments and characters authentically to the screen. Winner of the Samuel Goldwyn Writing Award and an Alfred P. Sloan grant, writer/director Melissa Finell’s comedic look at […]

Brightline, a leading manufacturer of video lighting systems, today announced two accessories for its ZELo desktop studio light for videoconferencing. Both the ZELo Clamp and ZELo Grip are designed to save desk space and provide versatility for lighting workspaces for videoconferencing. With the ZELo Clamp, the light’s base plate is replaced by an adjustable clamp that requires significantly less surface space at a workstation. The light’s main body housing includes […]