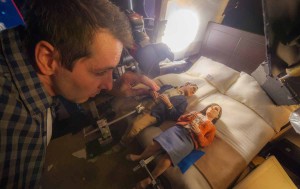 On the set of the animated stop-motion film, AnomalisaCharlie Kaufman’s animation-for-adults, Anomalisa, draws its title from a riff on one of the lead character’s names: She’s “Lisa” (voiced by Jennifer Jason Leigh) and according to the other lead character, Michael (David Thewlis), she’s an anomaly, hence, Anomalisa.

But in fact the entire project is anomalous – R-rated stop motion animation dealing with existential bleakness, the swift passage of time, and maquettes without clothes.

It might come as no surprise then, that the project was also anomalous for its cinematographer, Joe Passarelli, who had just come off some live action TV before being brought on board. The path began at AFI, where he went with Duke Johnson “We did our thesis film together,” he said, “then did a couple of live-action features.” Johnson eventually became a partner in animation production house Starburns Industries, and said to Passarelli, “I think you’d enjoy doing stop motion.”

Passarelli’s first such enjoyment came for TV, in a few episodes of Mary Shelley’s Frankenhole, an Adult Swim show also aimed at big folk. Passarelli recalls that he “went into that experience blind. I had never seen a stop-motion set before.”

That wasn’t the only new facet of production he was learning. While working on Frankenhole, “Duke was telling me about Anomalisa. He and Dino (Stamatopoulos, another Starburns partner) were working on it. We shot a Kickstarter for it, to see if we could raise some funds that way. That was crazy. At the time, I had never heard of Kickstarter. It was new, around 2012.”

Certainly it was new for raising seed money for anomalous feature films. But it worked, and after a return to live action, Passarelli found himself back at Starburns, where the biggest challenge, on the small film about a wayward business speaker on a trip to Ohio, was “to duplicate lighting to go along with the character and the story, so it’s a cohesive movie,” as he liked to do in live action.

In particular, “as far as shaping light on puppet’s faces. The challenge was getting lights in the eyes. In live-action film, that makes the connection more real – when you can see that twinkle in the eye.”

But the twinkly, merry band of producers at Starburns had promised the shape of the puppets’ “faces was going to be very life-like, with eyes made of different material,” than what was usually used in tabletop animation. Even so, they were only “half the size of a fingernail” in terms of surface area.

On top of that, to save time, the various puppet faces were made with a 3D printer. They were “spit out,” but each of the faces “had little dimples or striation lines,” each of those catching light in unplanned – and non-skin-like – ways.

“We were shooting on a Canon 70D,” Passarelli said, built primarily for “still image capture with Nikon lenses.”

To further diffuse the light, he would “cut out pantyhose,” then put them on the on rear element of the lenses. “It gave a nice soft quality. Like fusion would do in live action. It gave the whole image a warm inviting quality.”

The other way the film achieved an unusual intimacy for stop-motion was by having the camera follow the characters down hallways, etc., in tracking shots. There was a “general lift and a couple of bigger motion control units. It looked pretty similar to a live-action crane or jib arm.” And yet the aforementioned hallways were “just about the size of the camera” itself.

So while the camera moved they’d also “have to move walls along the way. The walls you’d have to take out – so the camera would fit.”

But this quick ability to rearrange walls also allowed for visible ceilings and enclosed rooms that are as unusual for this style of animation as they were when Orson Welles first tilted cameras upward in Citizen Kane. Sometimes other walls would be replaced with similar-looking material that could also act as a bounce for any lights being used.

If the work sounds painstaking, it was. “I worked on it for two years. Most of the time it didn’t feel any different than making a live-action movie,” Passarelli said.

Does that mean he’s ready to do another?

“I want to do a few more live-action films before going back to stop motion,” he laughed. “But I have been drawn to character stories.”

And certainly there’s nothing anomalous about Anomalisa in that regard. Even if the characters, in this instance, are just a few inches tall – the vast troubles of their souls, notwithstanding.

The Mayor’s Office of Media and Entertainment (MOME) for New York City has released its 2021 Economic Impact Study for the Film and Television industry in NYC. As with the recent FilmLA report, New York production is reported to be returning to pre-pandemic levels, according to Film Commissioner Anne del Castillo. You can read that full study here, but essentially, it says that the industry generated $18 billion in wages and $81.6 billion in […]

The Costume Designers Guild aka IATSE Local 892 has announced the timeline and key dates for the 23rd CDG Awards (CDGA), which will take place on Tuesday, April 13, 2021, executive produced by Jumpline. The annual CDGA gala celebrates excellence in film, television, and short form Costume Design with more details about the ceremony to be announced in the next few months. Submissions will begin on November 2 and last for almost two months […]

August 14, 2019 Staff Featured, News, Who's Where? Comments Off on NYWIFT New Board President Jamie Zelermyer

The New York Women in Film & Television (NYWIFT) has announced the appointment of its new Board of Directors President, Jamie Zelermyer. Zelermyer succeeds former President Simone Pero – the founder of For Impact Productions, and joins the newly elected 2019 Board of Directors members which includes Alex Cirillo, Kerry Fulton, Gretchen McGowan and Zenaida Mendez. Zelermyer has served on the NYWIFT board for four years, most recently as Vice […]