The original Equalizer ran on television from 1985-1989. Since then, the property has been rebooted twice, first as a movie starring Denzel Washington, and the reconceptualized 2021 version returns to television, starring Queen Latifah as Robyn McCall, “The Equalizer.” The latest CBS series is developed by Andrew W. Marlowe and Terri Edda Miller.

Stunt Coordinator Chris Place (House of Cards, Mr. Robot) was brought in to coordinate the majority of the action sequences in the first season of the restored series. The stunt coordinator has previously been nominated for a Primetime Emmy for a combined total of 5 times for his work on Russian Doll, Blindspot, and Boardwalk Empire. Place has performed stunt coordination for more than 240 projects.

The story directly links with the stunt coordination and vice versa. Place enlightened, “The allure of not knowing who this person in the show as her own daughter is starting to find out in season one that her mom isn’t really who she is. Even Detective Dante (played by Tory Kittles) doesn’t know who he’s dealing with when he sees her in action and she disarms two cops in the blink of an eye. That keeps it moving forward. None of us on the show know who we’re dealing with, we haven’t gotten that far.”

As the series unfolds, we aren’t sure what the Equalizer’s fighting style is. “She’s the Equalizer, it’s not Kung Fu or anything like that. The Equalizer is picking up whatever’s next to her and using it as a tool to take down the enemy, so being able to use the environment helps a lot. We’re not tied into one specific fighting style. She could be trained in any style; we don’t even know where her training is from yet. We haven’t revealed where she’s come from. We can basically do anything we want to keep it fresh and different because we’re not tied into this character’s one skill set. She has many skill sets that we haven’t even revealed yet,” the stunt coordinator explained. 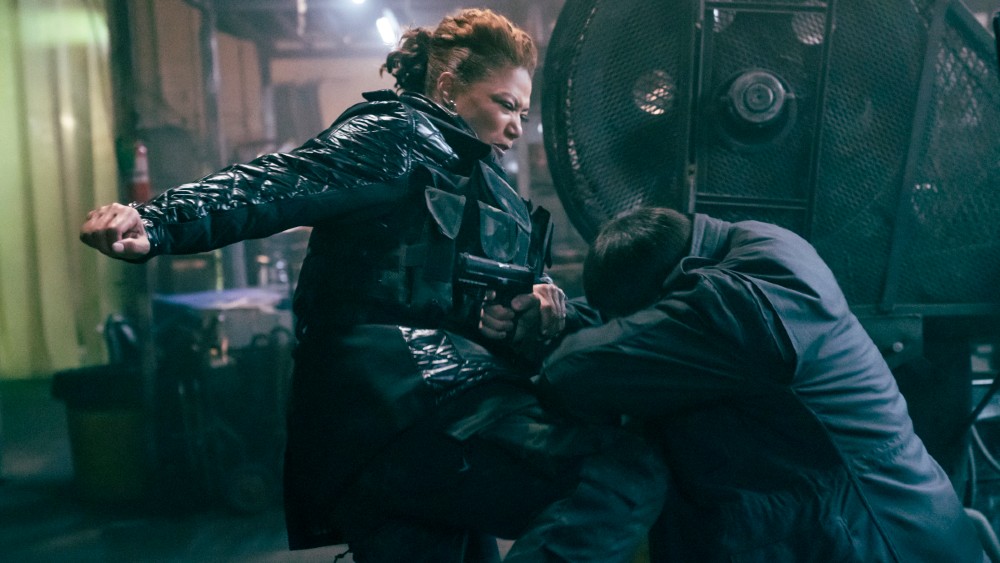 Queen Latifah looks very natural and comfortable holding guns due to her previous weapons training. Place described, “She obviously has some weapons training. She looked very comfortable with guns and knives and looks good in every scene when she’s holding them. I didn’t have to teach her too much because she already knows how to handle and load them. Queen Latifah loves firing the loud blanks, she’s not scared of it. With the blanks, we just have to have a safe distance to the cameraman or the person that they’re firing at. We have armors that let us know, depending on the load size of the blank, and the safe distance from the muzzle. But handling is the easy part, she loves firing weapons and shooting blanks.”

The gunshots and the squibs going off need to be precisely timed. The stunt coordinator added, “The special effects people are standing on the side with a button to fire the squibs. When someone pulls the trigger of the gun, they’re in charge of that little bit. Those two are tied together, the shooting of the gun and the squib going off, it’s a timing issue. Otherwise, we’ll just shoot the person being shot and there’s no timing. We can pop the squibs anytime we want.”

Queen Latifah actually rides during the motorcycle scenes. “I didn’t know if I could allow her to be on the bike at all. Then I found out she’s been riding her whole life. She’s fantastic on the bike and very vehicle aware. We allowed her to drive in a straight line or come around the corner and pull up. If it entailed spinning the back tire or anything too crazy, we got a stunt double to come in there,” the stunt coordinator admired. 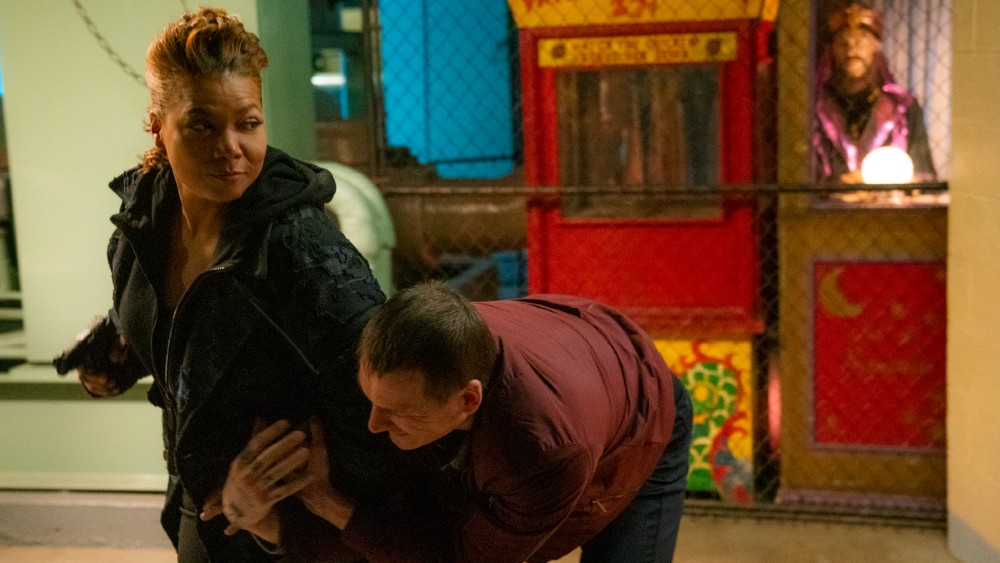 The stunt team closely collaborates with the cinematographer and special effects team, which Place applauded. “The cinematographers changed every other episode throughout season one. They put a lot of trust into me to find the angles that are considered cool or dynamic and what will look good for the action beats. The special effects department is from New York, I’ve been working with them for two decades. Timewise, we’re shooting episodic television, so it’s fast. We don’t have more than two hours for any fight.”

Safety is the number one priority as a stunt coordinator. “There’s always a safety concern, that’s part of my job. Everyone’s got to remember, if we’re wrestling around with metal guns, they have sharp edges, teeth come out easy, or noses get broken easy. Anytime we’re throwing fake punches, it’s very easy to be an inch or two off the mark and break someone’s nose. We have to build the fight and that’s why the rehearsals are so important. We want people to be dialed in, know exactly what they’re doing, and no surprises and that helps avoid all injuries that could be present. We had a great season, everybody was injury free, and it was fantastic,” the stunt coordinator indicated.

Queen Latifah’s extensive background in handling guns and a history of riding motorcycles contributed to the continuous flow and execution of Chris Place’s stunt coordination within the series. Place is looking forward to adding in more vehicle stunt work for Season 2, because the series was recently renewed.

Season 1 of The Equalizer can be viewed on Paramount+.

All photos courtesy of CBS.

Although he supervised all the numerous visual effects on the HBO Max series Raised by Wolves, Ray McIntyre actually represented the third visual effects team to be on the show, which is produced by Ridley Scott’s company, Scott Free. After the first collection of craftspeople worked from January to May of 2019, a new group was brought on in May, followed by McIntyre and his artists, starting in July. “Ridley Scott […]

Video Equipment Rentals (VER) announced that it has acquired the business of production services company DPS. In a sale ordered by the bankruptcy court, VER acquired more than half of the company’s lighting and film equipment, nearly all of its audio, video, and rigging equipment, its 70,000-square-foot facility near Burbank, Calif. and retained nearly half of the company’s employees. […]

May 4, 2022 Edward Douglas Crafts, Featured, Film, Industry Sector, Interviews, Visual FX Comments Off on Everything Everywhere All at Once VFX Team Reveals How They Delivered Eye-Popping Work With Such a Small Team

The eccentric visuals and impressive martial arts sequences in Daniels’ new A24 movie Everything Everywhere All at Once required a lot of work, both in pre-production and post, but it’s the latter where things really came together. Rather than go with a big VFX house as they did with their previous feature, Swiss Army Man, the directing duo of Dan Kwan and Daniel Scheinert instead called upon their longtime friend and fellow […]