In Greyhound, U.S. Navy Cmdr. Ernest Krause is assigned to lead an Allied convoy across the Atlantic during World War II. As a first-time captain, the pressure is on. Heightening the pressure, however, is that his convoy is being pursued by German U-boats. Little does Krause know that his first wartime mission is something much more. His mission is one of many that would come to be known as the longest, largest, and most complex naval battle in history: The Battle of the Atlantic. Directed by Aaron Schneider and starring Tom Hanks, Greyhound is currently streaming on Apple TV+.

Based on the novel The Good Shepherd by C.S. Forester, Greyhound takes us to a particular time in history, particularly naval history, with a distinct look, feel, and sound. Hundreds of men occupied the destroyers, distinctively constructed ships that traveled back and forth on the open Atlantic sea with just their skill, hope, and – sometimes – just sheer luck. With the story providing ample ground for research and exploration of all kinds, the artisans who took part in bringing the Tom Hanks-penned script to life for the screen were up for the challenge.

One of the immediate items that needed attention was making sure that the viewer was brought right on deck with Krause. This meant that one of the first orders of business was to capture the essence of operating a destroyer through production design and cinematography. As Cinematographer Shelly Johnson, ASC, explained, one of the ships they used for inspiration was the USS KIDD in Baton Rouge, Louisiana, and the experience contributed to how he approached framing his shots: “It was very tight. The interiors are even a little tighter than what we built. What struck me about being on that ship was the diversity between small and large interior and exterior. There were kind of these extremes that existed. And that, you know, I tried to carry it through everything… into the lighting… into the Canon performance. It informed me quite a bit just because of the extremes that they were working under.” 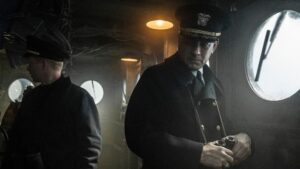 The USS KIDD served as a living encyclopedia for the teams, especially when it came to the interior shots. As Production Designer David Crank explained, while photographs from the time period proved to be useful in mapping out the exterior design of the destroyer used in Greyhound, that did little to help in conceptualizing how to approach the interior design of the ship. There was a logical explanation, however, for why finding reference pictures of ship interiors were so difficult: “You cannot find many pictures of the inside [of ships] because they didn’t want anybody knowing what was in the ships.” This is where the USS KIDD came in with the assist: “We were able to get a lot of information through [Supervisor] Tim [Nesmith] and he would call his mentors and their network to find out answers to specific questions we had.” It was a hands-on learning experience for Crank, but one he was grateful for.

Getting the appearance of the ship as accurate as possible was important. But, just as important, was capturing the authenticity of the clothing worn during this particular time period early on in World War II. Costume Designer Julie Weiss shared that, during this time early on in the war, there were not enough uniforms: “Some of the uniforms were left over from World War I. There were men who drew on the back of their jackets.” As a designer, there was also a need to emphasize the individuality of the soldiers by providing variances in the uniforms. Audiences would see these touches especially in the case of Tom Hanks’ Cmdr. Krause. These notes of individuality are seen reflected in the leather coat he wore with fur which, as Weiss explained, would have been accessible to him due to his leadership position. Maintaining these details provided the designer with plenty to focus on and, working in tandem with production and cinematography, allowed the team to create a cohesive visual tableau.

While teams were busy capturing the visuals for set, offset Composer Blake Neely and Sound Designer Michael Minkler were working together to create a fully immersive auditory experience for the audience. Using whale echolocation as inspiration, Neely tapped into the otherworldly to emphasize the different genre natures of the film: “I wanted to give them this otherworldly sound that you couldn’t tell what it is. It is a violin [and other instruments] played very poorly through a bunch of effects. But, by doing that, I think it gets a little bit more under your skin.” The time period also had an impact on the composition, with Neely deciding early on to stick to anachronistic sounds. Minkler pointed out how the modular construction of Neely’s music made it easier for him to move things around where it could have a maximum impact. 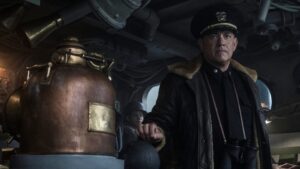 Once footage became available, it was time for Editors Sidney Wolinsky and Mark Czyzewski to step in. One of the main challenges for both editors was to figure out what was going on. However, Wolinsky pointed out how helpful Director Aaron Schneider was in making it easier to understand due to his grasp of the minutiae: “[Schneider] could tell me how many shells code needed to be shot for. Or the different sonar and which one is for what.” Having Schneider be available to answer questions provided them with tools to enable them to convey this information to the audience successfully when they went to edit. Balancing the naval information with maintaining the fast-paced, high-intensity of the film was also a challenge, but one that Czyzewski was up for: “Through all the naval jargon, all the information we throw at them, it really was a painstaking but, you know, very rewarding process.” And, as they both discovered, the test audiences were hungry for that information.

VFX on Greyhound would not be tackled until later in post-production when Visual Effects Supervisors Nathan McGuinness and Pete Bebb were brought on. Immediately, the timeframe was something they both had to consider. Creating a CG ocean was another major element to consider. However, the two were up for the challenge. Bebb explained that to capture the North Atlantic, they sent out a crew to the four corners of the UK to shoot on coastal regions: “We have a thing called Sky Capture, which is essentially 10 HDR cameras set up on tripods, and they do time lapse. And we just sat there for 12 hours, and just did it from dawn till dusk.” Once the two had the ocean created, there was then the challenge of adding the rest of the CG elements that we see onscreen with Krause on the water. But McGuinness explained that, since everything was carefully mapped out, the VFX team didn’t get lost keeping track of things. This helped assist them in maintaining as much accuracy and authenticity that the script and scenes called for onscreen. Working on Greyhound also enabled them to see the possibilities of where they could stretch technology further in their future projects.

All teams working seamlessly together to maintain an authenticity in Greyhound that is unmatched. And it’s all too clear that everyone’s passion for the project shines through in their work onscreen.

Greyhound is now available to view on Apple TV+.

All photos courtesy of Apple TV+.

Amy Adrion Presents Half the Picture

June 29, 2020 Scott Essman Direction, Featured, For Your Consideration Comments Off on Amy Adrion Presents Half the Picture

After going to graduate school for directing at UCLA, Amy Adrion struggled to get breaks in motion pictures when she discovered that the ACLU began an investigation into systemic discrimination against women directors in Hollywood. “It seemed like maybe something could change,” Adrion noted. “I wanted to document that.” Producing the project with her husband, Adrion invested in camera equipment and started reaching out to woman directors with whom she […]

In an industry that relies heavily on collaboration to combine technical excellence with inspiring creativity, the last two years have been a unique challenge. The ZEISS Cinema Lens team, meanwhile, has worked hard to not only continue communications, but to also expand and improve its capabilities across the Americas. Whether it’s from behind masks or monitors they have been actively engaging with the filmmaking community, unveiling new technology, maintaining channels, […]