What a wonder, as a critic, to be reviewing a film based on one of the most successful musicals of all time, considering its definitive movie adaptation was received to the tune of 10 Academy Awards way back in 1961. Enter Steven Spielberg and his take on the famous 1950s musical by Leonard Bernstein and Stephen Sondheim, West Side Story, itself based on Shakespeare’s Romeo and Juliet.

In some ways, this project is a layup. Do you not expect the highest quality product of a motion picture made by one of the world’s greatest living directors, based on a musical made by some of our greatest composers, in turn based on one of the most enduring plays by history’s most treasured dramaturg? On the other hand, the degree of difficulty speaks for itself. Can you imagine something harder than serving two different, well-known masters—the musical itself and the film it spawned—while providing both a unique, fresh perspective as well as one that does not infuriate the devoted disciples (this critic included) of the original and other such purists? The reality is that the film coming out of all of this is one of the year’s truly spectacular pictures, a fact that speaks both to the inherent quality of the source material but also to the inherent talent of its 2021 creators.

The plot of West Side Story should need no introduction. Its protagonist, Maria (Rachel Zegler), is a young, starry-eyed girl who just moved from Puerto Rico to New York’s decrepit San Juan Hill (today’s Lincoln Center) sometime in the mid-1950s. She lives with her loving but demanding brother Bernardo (David Alvarez) and his girlfriend Anita (Ariana DeBose), with whom Maria is lovingly close as well.

Like the young Capulets, the lives of these dreamers are wrapped in forces bigger than themselves. Gentrification has come to the west side of Manhattan, while the post-war slump has left some groups behind. Most notable is the band of young hooligans known as “the Jets,” led by the angry Riff (Mike Faist), who is resentful and suspicious of changes around him. Riff also dislikes that former Jet leader, his brother-like buddy Tony (Ansel Elgort), no longer wants to take up the mantle of their bandit cause against perceived invaders, particularly the Puerto Ricans. Having spent a year in the slammer and now under the protective counsel of the elder Valentina (Spanish for “the brave woman”), perhaps Tony has reformed. Valentina is new to the 2021 adaptation, played by none other than Rita Moreno, who sixty years ago won an Oscar for portraying none other than Anita. So it is that, when Tony and Maria inadvisably fall in love, their intended union will set up a dramatic clash between Riff’s “Jets” and Bernardo’s own gang, “the Sharks,” a titanic battle worthy of any Veronese tragedy that the Bard of Avon could have conjured up.

There are at least two planes upon which to analyze Spielberg’s West Side Story. The first is the focus that no one other than perhaps the youngest of audiences will have: as a standalone movie. From that perspective, West Side Story is nearly perfect, as Spielberg has once more mixed his usual combination of directorial, acting, and tech talent to create one of the best pictures of the year. Start perhaps with the crisp editing by long-time Spielberg collaborator Michael Kahn, who clearly understands that bringing a musical to the silver screen involves a host of strategic decisions about which character to focus on, when, and how close, and that these choices matter because they are left mostly to the audience during a live performance. Kahn is able to craft a film that keeps rolling along, just like 1961 directors Jerome Robbins and Robert Wise’s did, by combining closeups with panoramic shots of the most elaborately choreographed numbers. The visual activity is evenly but crisply paced, a critical element in presenting a successful movie musical.

The list goes on. Your eyes will surely catch Production Designer Adam (Grand Budapest Hotel) Stockhausen’s crafty interiors and his exterior sets, both of which provide additional, important information about the world that this story is set. The passing of six decades also allows Costume Designer Paul Tazewell (Hamilton) freedom to explore vintage ideas anew, which he does with a daring combination of colors and hues for the warring street thugs, as well as with new layers of texture for the dresses.

And what to say of the young talent? None of these songs are easy, none of the dance moves are simple. Nor, of course, is living up to the legendary status of actresses like Moreno or Natalie Wood, who played Maria in the original. As it turns out, Spielberg nailed this part, too, even though not one of the young talent he amassed is the one standout. The young Zegler (Maria) has perhaps some of the hardest songs, so much so that the task had to be doled out to Marni Nixon in 1961. But Zegler, unlike Wood, is a singer by trade, and she shines the most when she is showing that off in this movie. DeBose also acquitted herself well in unenviable tribulation of reprising what has become one of the most cherished performances in cinematic history, by Rita Moreno as Anita. This is particularly so during a spine-chilling, incredible scene in which she goes toe-to-toe with Moreno, now as Valentina. The biggest surprise perhaps is Faist, who gives Riff a layer that Russ Tamblyn was not asked to in 1961—the revelation that underneath the tough guy façade lives nothing more than a scared teenager. Elgort has a convincing presence as the daydreaming Tony, while Alvarez gives Bernardo the kick that the character requires, and that George Chakiris made a part of the role in 1961. 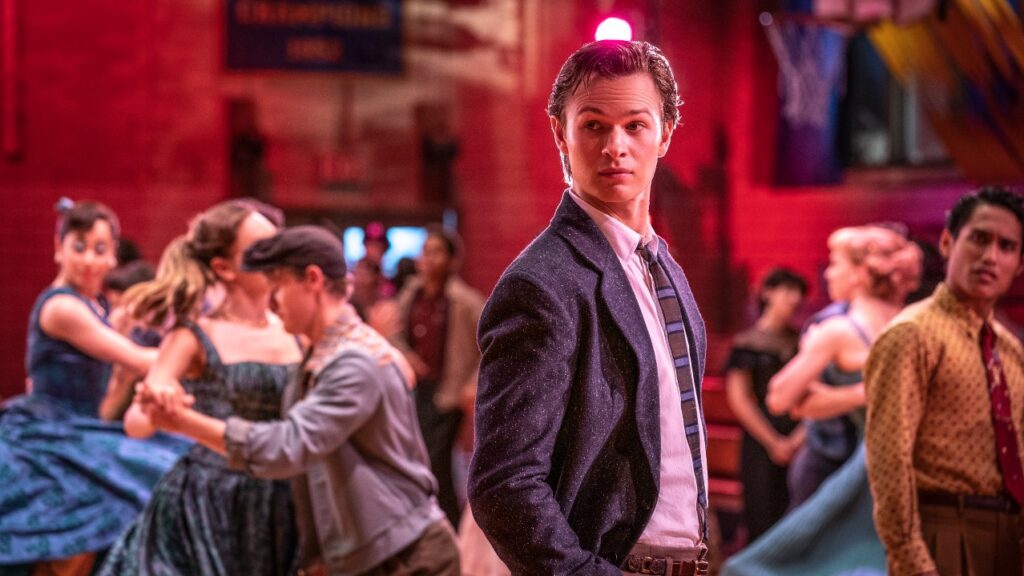 But, for as good as Spielberg’s West Side Story is standing on its own, the second plane upon which to analyze it will be the most popular, for better or for worse. That second focus should be apparent from marching through the first: is Spielberg’s movie better or worse than the original? Why did Spielberg do this or that scene differently? Why did he eliminate this scene or add that one, or change the order of songs? The answer to a lot of these questions lies in choices made by this movie’s screenwriter, Tony Kushner, iconic in his own right. Fundamentally, Kushner gives the story added substance compared to the thinner backdrops from 1961. He achieves this by inserting clever and straightforward dialogue that provides quick but meaty substance to the social anxieties animating the youth of America in the 1950s while connecting them to the problems of today. Whereas Ernest Lehman’s 1961 script was mostly interested in getting us from song to song, Kushner recognizes that 2021 audiences resist musicals. His screenplay is arguably the lone category in which Spielberg’s version clearly and plainly outdoes the Oscar-winning original.

Beyond that, comparing the 2021 film to the 1961 could lead you down rocky paths, as irresistible as it may be. Spielberg, after all, did not set out to remake the film, he set out to give his own spin on the musical. Digitalization, however, means that audiences—certainly critics—are far likelier to be familiar with the film version than the original Broadway production. Fairly or not, it will be this comparison that will determine this film’s destiny.

But one can quickly get ensnared by dangerous comparisons. One could say, for example, that Spielberg’s version “improves” the original or “fixes” it. That notion, however, rests on a premise: that there was something broken with the first movie to begin with. Under that theory, the casting of mostly white actors to play the Puerto Rican girls and the Sharks needed “fixing.” But, if you accept that 1961’s West Side Story was “broken” for that reason, you cannot view Spielberg’s take as “fixing” it. 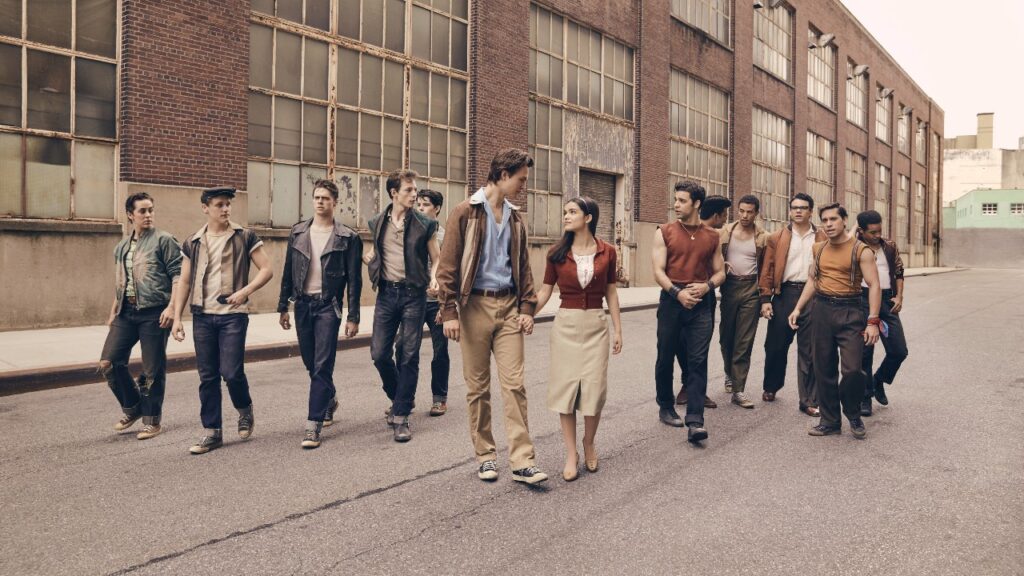 After all, Wise and Robbins cast only one Puerto Rican actress, Moreno, to play one of three Puerto Rican characters. Spielberg adhered to that 1:3  ratio, casting DeBose (whose father is from Puerto Rico) to play Anita. Curiously, all three actors in Spielberg’s film speak perfect English yet fake Hispanic accents for the movie. The notion that the 1961 movie did something wrong is therefore impossible to square with any notion that the 2021 version fixes it. Unless, of course, you embrace the startlingly reductive notion that “Hispanic” is a monolith of interchangeable impersonal drones with no racial, cultural, or ethnic variation between our rich tapestry of nationalities.

Leaving aside the “fixing” theory, there is no clear answer to the fallacious question of whether Spielberg’s version is better than Wise’s and Robbins’. Though the former clearly improves on the latter’s dialogue, the comparison yields results all over the place beyond that. Most of the changes reflect little more than Spielberg’s own choices. Though he would argue that he is not remaking the film, he certainly takes some of the same artistic liberties in ordering the songs and changing their lyrics that the film did over the musical. In other ways, the comparison actually does not work because Spielberg is simply returning the story to the way it was made for the stage and erasing the first film’s changes. In still other ways—including the Valentina character invented by Kushner for Moreno and the somewhat inexplicable decision to take the musical’s best song, “America,” out of the rooftop setting that made it a classic—Spielberg charts his own course. At the end of it all, the most we can say is that 2021’s West Side Story is just different than 1961’s.

Audiences, awards voters, critics, and film historians are unlikely to be able to resist the temptation to put the two pieces side-by-side. Yet perhaps the only way to apply neutral principles to critiquing this movie is to view its merits on its own, separate and apart from what preceded it. Doing so makes inescapable that Spielberg has delivered another one of his timeless movies. The original source material—the Shakespeare play, the Sondheim lyrics and the Broadway production—help tremendously. It also helps that, at his core, Spielberg made a movie that is about tragic love simply as a labor of love, no matter the consequences. The fact that when compared to the beloved 1961 original Spielberg’s film holds its own is just icing on the cake.

West Side Story will be released in theaters nationwide on December 10.

HBO’s limited series Lovecraft Country needed a bold and specific production designer who could not only tap into the imaginative elements of creating certain structures that didn’t exist but also design some that were historically accurate. In addition they had to be able to delve into multiple genres while traversing through both time and space. That seems like a very tall order to fill, 162 sets to be exact, but for […]

For a second day in a row, SETDECOR, the magazine of the Set Decorators Society of America (SDSA), has a great profile of two more Oscar-nominated Set Decorators, Karen O’Hara SDSA and Diana Stoughton, who worked with Production Designer Mark Ricker on the look of the environments for George C. Wolfe‘s Ma Rainey’s Black Bottom. The article includes a full interview with O’Hara and Stoughton talking about their work on decorating some of the sets, both the […]

The California Film Commission has announced that the Leo Carrillo State Park is temporarily closed due to extensive scheduled maintenance work. The Park will be closed to filming from April 25th to May 25, 2019. For any questions or concerns please contact Melony Light at the State Park Film Office – 818-880-0358