For director Kabir Akhtar, being hired to direct two episodes of Netflix’s new series Never Have I Ever represented a notable opportunity, as he originally came from the world of picture editing. “I got so excited that they were going to make this show,” Akhtar said of a series set in high school with a multicultural cast, “as a first generation Indian kid growing up here.”

In 2019, Akhtar directed 12 different episodes of various series, helming installations five and six of Never Have I Ever. “It’s an interesting quirk of the business that this happens at all,” said Akhtar of directing episodic television. “Jump on a moving train and start driving it immediately. It can be a little frenetic—from that energy comes a lot of innovation and creativity. The workflow moves very quickly.”

According to Akhtar, people who direct their first episode of a particular television series show up on a set for their first day, full of enthusiasm, while, for the rest of the crew, it would be just another Monday. “Cast and crew are looking for someone who’s going to be in charge,” Akhtar related, “who is going to listen to their point-of-view—pitching ideas and shaping performances, and being part of the team.” 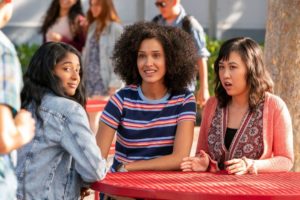 With each distinct show having an established visual style, when Akhtar comes in as a director on an ongoing series, he stated that one needs to adhere to the house rules. “Some shows don’t want really big closeups,” he said, adding that an individual show’s particular approaches are typically defined during the pilot. “What you are trying to do as an episodic director is show up and emulate the existing style and bring a personal flair to the show.”

In episode six of Never Have I Ever, which follows a main character and narrator apart from those in the other episodes in the series, Akhtar had more visual leeway available to him. “It’s a very bright, colorful-looking show with a lot of long steadicam moves, especially in the school scenes,” Akhtar detailed about the standard photographic approach in the series, conveying that episode six was differentiated. “Episode six [denotes] a lonely existence, with static wide frames and a starker color palette while we were in that story. You want to go visually where the story leads.”

Generally speaking, Akhtar does not wish to impose his personal, idiosyncratic style on an episode of a series he is hired to direct. “I don’t think it usually works,” he simply said. “You are part of the team. Collaborating leads to a better end product.”

With regards to shooting for Netflix, Akhtar communicated that the differences between premium streaming outlets and network television are mostly in the writing phase of the process, with fewer restrictions in streaming series. “Stories, themes, words you can say, and things you can show,” he stated. “As a director, I am always looking to capture as much authenticity you can in the storytelling. A lot of that is driven by the material on the page.”

On Never Have I Ever, Akhtar had four days of preparation for each of his two episodes, plus five days of shooting. “It was combined — eight days of prep and ten days of shooting,” he explained, adding that he undertook concept meetings to walk through the script with all of the show’s department heads to get key crewmembers heading on the same path into production. “It is a constant conversation between me, the showrunner, the writers, and every department head. We walk through the sets, location scouting, going through the script, and making sure that [we have] all of the things we need on the day to make it feel real.”

During his prep period, Akhtar spent due time anticipating technical, aesthetic, and scheduling issues which can arise during principal photography. “Trying to think ahead, to be ahead of all of the potential problems that might crop up,” he noted. “90% of problems on set you could have solved during pre-production. You don’t want to be on set and say, ‘You should have thought of this.’ By then, it’s too late.” 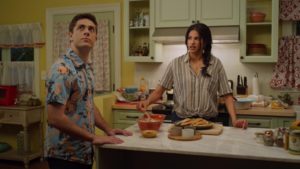 Revealingly, Akhtar claimed that ‘clock management’ is a vital part of directing, where a director must complete all of the shots on a single day’s shooting schedule, lest that director send a show into extra production days. “You really need to make sure that you are spending your time on things that matter the most,” he said. “In a 12-hour day, you have 36 20-minute blocks. How many more 20-minute blocks do I have left in my day? Do I want to spend it on a scene?”

Dictated by Directors Guild of America contracts, episodic television/new media directors usually get two days in post-production to work on their cut of a half-hour episode. “You are there to make one episode of a series,” Akhtar said, stating that his considerable experience as an editor informs his work in his series’ editing rooms. “Make sure we are presenting the best possible version of what we shot. Some directors want to come in and shape the episodes the way they would make a movie.” 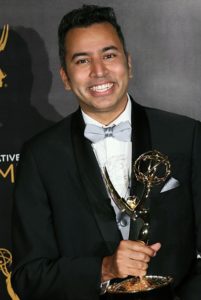 Having made the jump to being a full-time director, Akhtar yearns to work in that capacity on one dedicated show. “If you are in one place you love, you can have more of an impact on a series overall, which is very rewarding,” he said, noting that he now has many intriguing irons in the fire with several additional goals. “Landing on a show as a producer/director, getting your own show up and running, and sliding into features. I’m very excited to see what happens.”

The Art Directors Guild (ADG, IATSE Local 800) has announced that Production Designer Stephen Myles Berger will receive a Lifetime Achievement Award from the Set Designers and Model Makers (SDMM) Council at the 24th Annual ADG “Excellence un Production Design” Awards. The 2020 ADG Awards will be held at the InterContinental Los Angeles Downtown in the Wilshire Grand Ballroom on Saturday, February 1, 2020. This is the third of four […]

The Accidental Turitz: Sylvester Stallone Should Throw in the Towel and Stop Fighting With Rocky Producer Irwin Winkler

I am a big fan of the Rocky movies, and of Sylvester Stallone himself. Always have been. I know he’s got a bit of a reputation in Hollywood, but man, I was rooting for him so hard to win that Oscar a few years ago for his performance in Creed. You’ll never hear me say a bad word about Mark Rylance — met him once, lovely fellow — but come […]

In Honest Thief, an Open Road release opening in theaters on October 16, Liam Neeson plays Tom Carter, a bank robber trying to make amends. When Carter confesses his crimes to the FBI, it unleashes a desperate chase after $9 million with Carter the prime suspect in a murder. Set in Boston, the movie also stars Kate Walsh, Jeffrey Donovan, Jai Courtney, Anthony Ramos and Robert Patrick. Honest Thief is the […]