Jared Leto’s over-the-top performance as heir to a fashion fortune in House of Gucci garnered mixed reactions from critics, but one thing that is undeniable is that his look is memorable. In the film, he has to look like the bombastic Paolo Gucci did—balding, with long side chops on his face, a pudgy nose, and a big belly. The naturally handsome Leto obviously looks nothing like Paolo Gucci in real life but pulled off the look thanks to impressive work by Göran Lundström, in charge of Leto’s prosthetics. Lundström is a well-known Swedish makeup artist, famous for work on films as varied as Rogue One and, more recently, the Swedish fantasy film and Oscar contender Border.

Last week, we caught up with Lundström about the challenges of working on this ambitious project with the little time he was given.

Below the Line: Göran, how did you come to the project, and how did you begin the creative process?

Göran Lundström: So, I covered all the parts on Jared’s character. I got involved through him—he had someone else to do the makeup for him and it was not working. I got a phone call from my agent three weeks before we needed it done. And then a Zoom interview with Jared. That is not typical, typically I talk to the makeup department head. Here, Jared had thought of the idea and got the ideas from him. I actually never met him in person until the makeup test. We based it based on pictures of Paolo and what he really looks like. It was a 7 day a week project for the three weeks I had.

I saw the film yesterday for the first time and I had no idea how he was going to act, but it ended up working very well. I was blown away and I just told him that I loved his performance. I think the makeup helped but it was very difficult makeup to do with the very little time and to be honest I don’t think I ever want to do that again!

Lundström: What I know about doing a lot of character makeup is that if you start doing the eye area you can get into trouble. You can do bags under the eyes, but it can make someone look really fake. So, I stayed away from the eye area for him. I did not think that was necessary to change his eyes. It was his own eyebrows and eyes—no eye patch or anything like that. 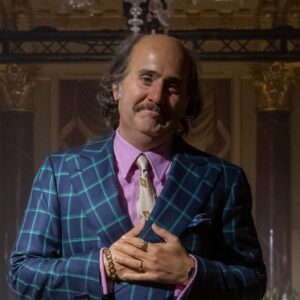 I changed the face more, to make it rounder. His face was not as wide as Jared’s, but Jared was covered in silicone from his forehead all the way down. He used his own mustache and shaved his beard. We also had to make a bald head in three pieces, that we could move around, and we put those on top of him. I had nine prosthetics total. There is a neck piece, earlobes, a nose, a chin, and three for the bald head. And by the way, I had only half sculpted them by the time we started filming, we had to finish adjusting them when I could finally put them on him.

The prosthetics were all made out of silicone, which moves very easily if you do it correctly, soft enough. At the same time, it is more difficult to make good prosthetics if it’s too soft and stretchy. We found the right balance here because he had to use the face a lot and move it a lot.

BTL: How often did you make them?

Lundström: Every day, we never kept a prosthetic. We had to make new ones every day. The quality would have been even higher with more time, but this was really a very hard project.

BTL: What about body prosthetics?

Lundström: We were not that involved in that, but he had a fat suit. He always wanted to be Paolo and he did not want anyone else to see Jared. We did the makeup off set, so he was Paolo and people treated him like that. It was very interesting to see him like that. 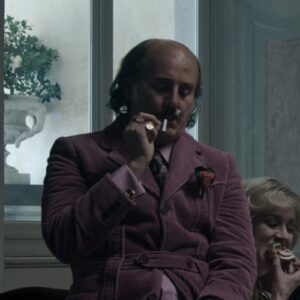 BTL: What was Ridley Scott’s involvement in the prosthetics for Jared?

Lundström: He was very involved, we had conversations with him too, but Jared was in charge. Jared had a 3D rendition of himself from another movie. We started with that and with his ideas—Ridley cleared it but deferred to me and ultimately to Jared.

BTL: What was the hardest part about this project for you? Was there something you had to try several times that did not work?

Lundström: Jared’s hair. The prosthetics on top of his hair were not working. We were really hoping he’d cut it off and you know he loves his hair. It used to take us one hour and a half just to cover his hair and adjust the prosthetics on top of it. Towards the end it came up, he asked us how long it would take to shave his head and we told him it would take about 90 minutes and save us a lot, but at that point, it was done. So, getting him to look bald, with a cap, and covering all that he had, and then fitting on the prosthetics was a challenge every day.

But to be honest, the hardest part was just having three weeks to design so much facial prosthetics for one person. I do not recommend doing a project of this scope in just three weeks. A little bit more time and meeting the actor from the beginning would have been crucial! It would have allowed me to take skin hair samples, hair samples, and figuring out where the hairline is. That is what I would have normally done

House of Gucci is now playing in theaters.  All pictures courtesy MGM/UA Releasing.

NAB Cancels 2020 Show Due To Coronavirus

According to a recent article by the LPTV Coalition, the National Association of Broadcasters (NAB) notified the show community of their decision to cancel the annual event after monitoring the coronavirus developments both domestically and globally over the past few weeks. NAB President and CEO Gordon H. Smith addressed the reasoning behind their recent decision in the letter below: Dear NAB Show community, In the interest of addressing the health […]