News Ticker
For the new Starz series, Ash vs. Evil Dead, production designer Nick Bassett was charged with conceptualizing and executing the look of the show, shooting in New Zealand. “It is an odd world,” he stated of the series, a ‘sequel’ to the popular trilogy of Evil Dead films. “I got invited by [producer] Rob Tapert. I’d done quite a few shows with Rob before. Next, I talked to Sam [Raimi], the main creative drive on the first episode. We talked as a group together with Sam.”

With an introduction from afar, with Bassett located in New Zealand, and Raimi and Tapert at the Los Angeles headquarters of their Renaissance Pictures production company, the group first discussed the artistic ideas in broad terms, gradually getting more specific, with Bassett first reviewing all the original films. After Bassett read the pilot script, a question befell him which all production designers ponder at the outset of a new project, big or small. “How the hell are we going to do that?’” recollected Bassett, knowing he needed to invent a way to approach the show and present his vision back to Raimi and Tapert months before production. “We got an introduction, went off and did our own thing, then regrouped. It gave us time to think about it on our own. Sam has a spirit to him and style of working that’s collaborative. You get what he means without having to spell it out.” 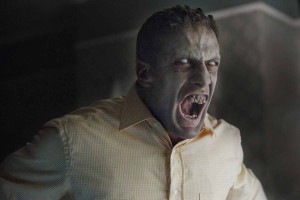 According to Bassett, the first season of any series is typically the most difficult “because no one really knows the budget.” He stated that the art department on such a show is usually allocated a percentage of the total series’ budget. “In your mind, you have a general idea of what you are going to spend,” he related. “This was a TV show with fast turnaround. In this case, I didn’t know how much we were going to go outside and how much we are expected to build. If you build the whole world in the studio, you have a 100% control.”

After Raimi participated in full on the pilot, for which he served as director, Bassett began to gain a more solid direction for his department. “Sam came on board and told us what he didn’t need: a lot of wide shots. He created quite carefully-composed frames,” Bassett explained. “Other directors have their own opinion of what it should be – that gets trickier. We had a figure in mind and corralled the sets within that budget. Anything out of that, we discussed it with production, or you put a line through it – can’t afford it.”

Establishing the show with the pilot in pre-production, Bassett realized that he would have to maintain a modicum of flexibility with his methods. “We were setting up a season with only a few scripts,” Bassett revealed. “There wasn’t a broad outline. We were evolving with it. That’s quite a tricky process. It makes budgeting tricky. The trick is if you can come up with what you like it to be and only build what you need; that’s the affordable way to do it. Designers drive what it ends up being.” 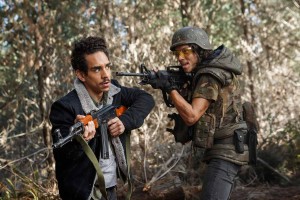 Helping considerably was the fact that Bassett came of age during the period that the first two Evil Dead films made their initial impact with their 1980s release. “I was the perfect generation to watch Evil Dead II,” he said. “We got nostalgic for that period of time, which set the tone of the show. What was the feel of films back then? It is quite retro; it has a nostalgic feel, but hopefully not old-fashioned — more in-camera tricks. We weren’t relying on visual effects for any of the set work — one set extension and a couple of cover-up signs. That was the right the approach for a project like this.”

Speaking 10 weeks out from the beginning of production on season two, Bassett noted that his art department, at its peak, expanded to 120 people with carpenters, painters, propmakers and the full squad. “This season is up front – building sets that will last the season,” he said. “The good side is we have a better approach to it this time around. That’s probably why season one and two are different. In season one, we were trying to form it as we went along. Sam knows the project so well, you can tell if you are right or wrong and you get assurance. He was a great figurehead to us.” 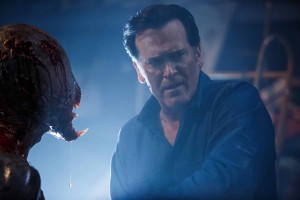 Noting that this season, he is in a “luxury period” with 12 weeks of pre-production, Bassett unveiled how, nonetheless, Ash vs. Evil Dead requires spontaneity, even in the art department, given the nature of the show. “Scripts keep changing,” he said. “We are designing sets constantly. We will come up with an idea in a couple of days. Sometimes it was three or four weeks to do it. That’s really quick considering that you have to build in special effects and stunts. We’ll work together on a lot of those gags.”

In New Zealand, Bassett stated that there are “very few purposeful studios” for set construction, so he built much of Ash vs. Evil Dead in converted warehouses that sprawl out. “We are building in three parts of town,” he said. “Last year, we built in a car park in front of a studio at night. We couldn’t find the right shopfront. How do you block off the roads and control it? ‘Fake everything’ is our principle. That’s the right approach — build it from scratch.” 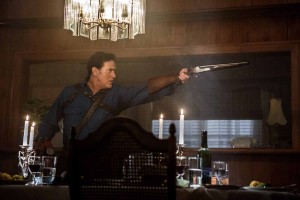 Working with his art directors, Bassett has regular meetings to conceptualize the department’s duties and determine logistics. “Where a set is going to go? How we are going to build it? How much time will it take? Will it work?” he offered. “We try to go as thoroughly through it during pre-production.”

On Ash vs. Evil Dead, Bassett will even go so far as to begin building the sets for an episode before that episode’s director starts work. “Episode directors on a show always want to make a change – that’s the nature of creative people,” said Bassett. “We come up with an idea, hand it to the producers, and the director makes more script-oriented changes. Off-set, we have a main art director in charge of set design while others will do more detailed drawings. We have two art directors who do an episode each on set and are very hands on, being with the director the whole way through so that they see the process through.”

In retrospect, Bassett confessed that Ash vs. Evil Dead was a definitively rewarding show on which to ply his trade. “I think it’s probably the most creative show that I can imagine because we are building so much,” he said. “It’s ultimately fantasy: a twisted reality. If you have an idea, you can generally push it through.”