Now in its 11th year, the Broadcast Production Awards honor creatives in broadcast and streaming media across a variety of formats, including production and set designers, motion graphics designers, composers and product engineers. Other honorees included CCTV, CNN, NBC Sports and Sky News. 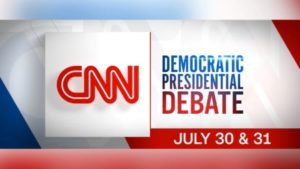 Stephen Arnold Music’s “Super Open” was used in the opening to CNN’s Democratic presidential debates. The robust orchestral score captures the drama and anticipatory atmosphere of the event through a stirring blend of live trumpets, trombones, French horns, strings and percussion.

REVIEW: Godzilla vs. Kong is More Worthy for Its CG-Created Monsters Than Much Else

March 29, 2021 Edward Douglas Featured, Film, Film Releases, Reviews Comments Off on REVIEW: Godzilla vs. Kong is More Worthy for Its CG-Created Monsters Than Much Else

Make no mistake that Warner Bros’ Godzilla vs. Kong is not the first time the mighty behemoths have clashed, and it probably won’t be the last. When Legendary Pictures scored the rights to the Toho Studios franchise and the Universal Pictures staple King Kong (probably with limitations like only referring to him as “Kong”), a new face-off was bound to happen. If you’ve been living in a bubble for longer […]

July 15, 2022 Staff Awards, Featured, Film, Industry Sector, News Comments Off on Julia Roberts to Be Honored With Icon Award at the Academy Museum Gala in October

The Academy Museum of Motion Pictures today announced that Oscar-winning actress Julia Roberts, whose career spans three decades, will be honored with the Academy Museum Gala Icon Award. She will join previously announced honorees Miky Lee, Steve McQueen, and Tilda Swinton, each of whom will be recognized for their invaluable contributions to cinema, at the second annual Academy Museum Gala on Oct. 15, 2022. The evening is presented by Rolex and co-chaired […]

On Sunday night, Sept. 19, the Academy of Television Arts and Sciences  handed out the 73rd Primetime Emmy Awards in a ceremony hosted by The Neighborhood star Cedric the Entertainer from the Microsoft Theater in downtown Los Angeles. The ceremony, exec. produced by 2020 Emmy returnees Reginald Hudlin and Ian Stewart through Done+Dusted and Hudlin Entertainment and directed by Hamish Hamilton, aired live on CBS and was also available to stream on Paramount+. All of the below-the-line Emmys were […]