One of the most captivating things about Bruno Delbonnel’s cinematography for Big Eyes is the film’s California Kodachrome look, harkening back to magazine photography of the 1950s and early 1960s, the era depicted in director Tim Burton’s quirky new biopic.

The film details the strange but true story of Walter and Margaret Keane, played by Christopher Waltz and Amy Adams, whose kitschy paintings of sad waifs with enormous eyes caught on big with the public and attracted many celebrity collectors. Based in San Francisco, they gained fame and fortune. But behind their enormous success lay an epic art fraud. The collecting world was scandalized when Margaret revealed that she was the actual painter of the works that her husband had signed and had taken sole credit for, and that she had been bullied into the arrangement.

“Tim said he wanted something very light and slightly twisted, not a big fancy movie,” said Delbonnel. Burton mentioned the films of Mario Bava, an Italian director of B-movie films that have been praised for their deep-color cinematography and visual composition.

Delbonnel’s concept was to see things through Margaret Keane’s eyes. His pursuit of a period look gelled when he discovered a 1950s Life magazine with a feature interview with the couple. “Instead of doing something moody, I was inspired by the Kodachrome-style color photography in that and other issues of Life,” noted the French director of photography, which, he says, complemented the pop pastels in Rick Heinrichs’ production design and Colleen Atwood’s costumes. “As the drama gets darker, it gets really colorful but very twisted.”

In photographing the actors, Delbonnel used his signature soft shadows. “The way I work, I don’t like hard shadows, and in particular I wanted Amy to be beautiful in the movie,” said Delbonnel. “Her character was very special, very fragile, and I didn’t want any big hard shadows on her face. As a whole I didn’t want to heighten the film’s drama through exaggerated lighting.”

Big Eyes was sparsely budgeted at around $11 million. “This is really, really low for a Tim Burton movie,” the DP noted. “With this in mind I was more interested in capturing things than going with a more stylistic cinematic way of shooting.” Crane movement was out and tracking shots were kept to a minimum, shaving costs. Framing was expansive. “I gave the actors a lot of room to move in the frame.” 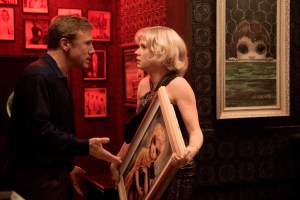 During the five days allotted for shooting in San Francisco – the movie was for the most part made in Vancouver, Canada with a quick detour to Hawaii – most of the time was spent filming in the funky, artsy North Beach area where much of the story takes place. Delbonnel also searched for backdrops that would add visual interest to the film. “We were framing first before we blocked the scene, which is unusual,” he said. “We’d go around with the camera and I’d say ‘That’s a nice shot, that’s a nice view of San Francisco,’ and then we’d bring the actors in.”

Though Burton wanted to shoot on film, Delbonnel shot for the first time using a digital camera, the ARRI Alexa, a choice dictated by necessity due to the closing of the last film lab in Vancouver. Because the director insists on seeing dailies in the morning from the previous day of shooting, sending film negatives to a lab in Los Angeles or Toronto and getting them back in time would have been prohibitively expensive, if not impossible.

“To me it was a strange learning process shooting digital and I didn’t like it very much in the beginning,” Delbonnel said, but aside from having to deal with the logistics of the digital camera, he said that it is becoming difficult to discern between film and digital cinematography. 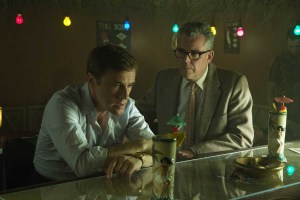 Delbonnel, however, has enthusiastically embraced digital tools in the digital intermediate (DI) process, which takes place in postproduction. The sophisticated adjustments that can be made are often used to correct flaws or make tweaks. But the DP is known for using the DI for artistic purposes, and has suggested it can be similar to painting. He first gained attention for his cinematography on Amelie, in which he enhanced and manipulated colors in parts of the frame, and received the first of four Oscar nominations for best cinematography. The others were for A Very Long Engagement, Harry Potter and the Half-Blood Prince and last year for Inside Llewyn Davis, directed by Joel and Ethan Coen.

Big Eyes was the seventh consecutive movie he teamed with Peter Doyle, who he calls “an absolute genius color grader.” The two have developed proprietary software. “It can analyze colors — if you have 30 reds, the computer gives you three reds, with a very heavy saturation,” he explained. “So you get a very pure red, or a pure blue — instead of playing with the saturation button, you ask the computer to analyze the image. You not only can saturate the main image but also fade other areas, which makes it very interesting. I couldn’t have gotten those colors in Big Eyes in any other way.”

Having also worked with Burton on Dark Shadows, Delbonnel has recently begun to prep his third film with the director, Miss Peregrine’s Home for Peculiar Children, to be shot in London. “Working with Tim is unique, he is very instinctive,” said the cinematographer. “He comes on set not knowing exactly what he wants, but within five minutes he tells you. You embrace it because if you fight against it you’re dead.”

Whiplash, a low-budget sophomore effort by 29-year-old director Damien Chazelle, who also wrote the screenplay, has emerged as the dark-horse darling of this year’s movie awards season. The building buzz is that it has a good chance to get nominated for the best picture Oscar, as well as in other categories. […]

Graham Annable and Anthony Stacchi‘s film The Boxtrolls ends with a shot in which a long pull-out begins to reveal an animator at work around the foot-high puppets with which the film was shot. The fact that modern audiences may actually need this reminder of the almost absurd amount of effort that’s intrinsic to stop motion is an indication of how rare it is; not since Laika‘s previous film, the Oscar-nominated ParaNorman, has the technique won such widespread acclaim. […]

Contender – Makeup Artist Jan Sewell, The Theory Of Everything

In James Marsh’s The Theory of Everything, the life of theoretical physicist Stephen Hawking is examined from his boyhood until the recent past, covering over a quarter century. The makeup for the actors in the film had to reflect this time span, additionally dealing with the transformation that Hawking (Eddie Redmayne) goes through, since he suffers from a debilitating physical disease that left his mind intact but his body almost entirely crippled. […]