In talking about The Homesman – his third collaboration with actor/director Tommy Lee Jones – composer Marco Beltrami shared his satisfaction with their creative partnership. “I respond first off to his writing, his script, the way his mind puts things together. I respond to his quest for creativity and originality.”

It’s a quest that has pushed Beltrami to experiment and do things he might not have attempted on a more traditional studio picture. “The fact that he does not temp his movies with any existing score, he sort of says, ‘This is what I want. This is what the movie needs.’ He leaves it up to me to discover the essence of his picture and where it goes,” explained Beltrami. “It’s a rewarding process working with Tommy Lee. It pushes you to do extraordinary things, which certainly was the case with some of the instruments we built for this and even the way we recorded things with the orchestra outside.”

The orchestra was a chamber group. With deadlines to hit, the logistics of recording outdoors posed potential problems, such as unpredictable weather, planes overhead or even a noisy flock of geese down the hill from the Malibu recording site. So to hedge their bets, Beltrami booked interior as well as exterior sessions. Nevertheless, a lot of the music in the movie took advantage of the natural ambiance from the exterior recordings to emotionally reinforce the stark environment of the story.

“The whole idea was that in this environment ­– studios are engineered to be acoustically warm and beautiful, and bring out the rich complexities of musical instruments – this environment is so much the opposite,” said Beltrami. “Things exist and then just dissipate into the environment. That’s what we wanted to achieve with the music as well. We thought we’d try it and it worked out good.”

Beltrami joined the project before production began. “I think we were working on The Sunset Limited,” Beltrami remembered. “Tommy told me about this and I read the book. Then he sent me the script and early drafts.”

Once production started, the composer visited the New Mexico set and viewed some dailies to get a sense of how the story was playing. “My original thought was if there was a way to record in one of those dugouts, one of those sod houses, that would have been ideal, but it was prohibitive.”

During post, Beltrami was able to feed some music to editorial for use in the cut. As might be imagined, the music for The Homesman contains western and folkloric elements that suggest the time and place of the film. The melodic theme for Mary Bee Cuddy (Hilary Swank) was based on simple songs of the time. The first thing the composer wrote was the music inspired by a scene in the screenplay that contained a verse for Cuddy to sing. 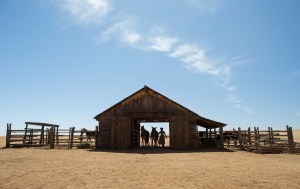 Beltrami’s score also used elements of suspense that he had used in films like The Woman in Black. “At that time in that austere environment there’s heaven and earth and the people are caught in between,” explained Beltrami. “It was a scary environment. The possibility of turning these women crazy was a real problem. To me it was horrific in many ways.”

The music that used experimental instruments – a harmonic guitar was one of the instruments constructed with his assistant Buck Sanders ­– took longer to create. “It’s just like a long piece of wood with strings that have different pick-ups on it, so that instead of hearing the actual string, you’re hearing the harmonic. It’s a very pure tone,” explained Beltrami. “It was late in the process by the time we got that built the way we wanted it to be, so we sent that music over much later.”

Building the wind piano also took some time, but piano was to be a primary instrument in the score. On a bit of land around Beltrami’s studio, they bolted a piano to the top of a metal storage bin and strung special-order piano wire though the instrument’s sound board 175 feet up the hill to a pair of water tanks and connected the wires in such a way that everything was able to resonate.

“The piano acted like an aeolian harp, almost like the little harps you put in a window and they sing,” explained Beltrami. “We were able to tune the strings and get different scenarios out of the wind and be able to use that in conjunction with the key of the music we were writing in. It turned out that when the Santa Anna winds begins to blow, that thing, it just sings so loud, it’s incredible. You can hear it a mile away.”

Some of the neighbors did remark that they heard screeches and howling, but according to Beltrami, the instrument can be played different ways. “I did play it like a regular piano. The film opens with it – just that piano up there.”

The harsh frontier can be so lonely.

Watch this behind-the-scenes interview with Beltrami and Jones. (Video courtesy of Marco Beltrami and Costa Communications).

In Darren Aronofsky‘s Noah, the creator of the world chooses a man (Russell Crowe) and his family to build an ark and fill it with the world’s animals before a world-wide flood cleanses everything left behind. On hand to dress the inhabitants of this world was costume designer Michael Wilkinson, who is known for his work on 300 (2006), Man of Steel (2013) and American Hustle (2013) for which he received an Academy Award nomination. Wilkinson was as eager to work with Aronofsky as he was drawn to the script. […]

One of the most captivating things about Bruno Delbonnel’s cinematography for Big Eyes is the film’s California Kodachrome look, harkening back to magazine photography of the 1950s and early 1960s, the era depicted in director Tim Burton’s quirky new biopic. […]

New York-based Nice Shoes has partnered with Chicago-based production and post house Optimus, connecting the talents of its New York colorists to Chicago advertising agencies remotely. “Technology has advanced to the point where remote, real-time color on a calibrated system is not only viable, it’s proven,” said Nice Shoes Partner/CEO Dominic Pandolfino. “This isn’t an experiment, it’s a fact.” Since 2010, Nice Shoes has leveraged proprietary technology featuring a secure […]