In Darren Aronofsky‘s Noah, the creator of the world chooses a man (Russell Crowe) and his family to build an ark and fill it with the world’s animals before a world-wide flood cleanses everything left behind. On hand to dress the inhabitants of this world was costume designer Michael Wilkinson, who is known for his work on 300 (2006), Man of Steel (2013) and American Hustle (2013) for which he received an Academy Award nomination. Wilkinson was as eager to work with Aronofsky as he was drawn to the script.

“When I read it, it really blew me away,” Wilkinson said. “This wonderful story, on a symbolic level, is an allegory about man destroying his environment through insensitivity and self interest that seems extremely relevant for today. It shows what happens when we lose compassion for one another.”

The basis for the way the characters are dressed is taken from a statement Aronofsky made to Wilkinson at their first meeting. “Darren wanted there to be an ambiguity to whether this film takes place 5,000 years ago or 5,000 years in the future,” Wilkinson explained. Fascinated by the concept of juxtaposing the ancient with the modern, the costume designer threw himself into researching all kinds of world cultures throughout history as well as contemporary fashion designers. After filling his plate with images of photography and textiles he got down to illustrating ideas. “What I came up with was the idea of using unique and beautiful, rough, raw textiles with an ancient homespun feel and using them in unexpected ways to create more modern, edgy, strong silhouettes.”

All the silhouettes he wanted had to be designed and created because they didn’t exist in the costume houses. The principal character’s costumes were all made by hand with hundreds of hours of hand sewing and binding invested in the process. The result is a striking handmade look. There were also hundreds of extras to dress. Wilkinson approached this task by creating 14 basic shapes and then he used different fabrics and details to make all the variations of costumes seen in the film. 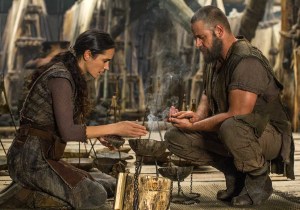 The earthy color palette tied together the costumes that Wilkinson called ‘the modern primitive.’ He collaborated with the production designer, Mark Friedberg to make the characters one with their environment. “We talked a lot about the different groups of people in the film, what materials they had available, what environments they were in and how they used their environments,” said Wilkinson.

The collaborative process was cherished by Wilkinson, who loved working with the rest of the team in the costume department. One memory stands out to him and sums up his experience working on this film. “We were in the middle of Long Island and it was about the third week of night shoot and every night we had rain towers that poured rain down on hundreds of extras. We had a night crew shooting, but then we had a day crew who came when we were all gone that dried all the clothes and maintained them and set them up for the next night’s shoot. It was a wonderful 24/7 commitment to the look of the film. Everyone had such a great attitude and helped me express my creative vision. I was extremely grateful.”

J.C. Chandor Revisits New York of the ’80s in A Most Violent Year

J.C. Chandor is excited to be putting A Most Violent Year into the world. Written also by the director, the film, set in New York during the winter of 1981, statistically the most violent year in the city’s history, tracks the story of a man (Oscar Issac) as he attempts to protect his wife (Jessica Chastain), his family and expand his business amid the corruption and obstacles that stand in his way. Chandor is also known for Margin Call (2011), for which he received an Academy Award nomination for best writing of an original screenplay, and All is Lost (2013). […]

The latest movie by award-winning director of photography, Roger Deakins, is Unbroken, an ambitious World War II biopic helmed by Angelina Jolie in only her second time in the director’s chair. “The hardest thing for Angie and certainly for me as the cinematographer was to make it all feel and look like the same movie and not like little bits put together,” Deakins said. […]

Mike Leigh‘s Mr. Turner explores the life of eccentric painter J.M.W. Turner. Working without a script, Leigh crafted the story from rehearsals with the actors. The process of working without a script was an interesting one, especially for production designer Suzie Davies. Best known for her work on The Children (2008), Davies was enthralled by the idea of making a film about Turner with another artist she admired, Mike Leigh. […]