News Ticker
“Danny’s has been one of my idols, forever,” said editor Elliot Graham of Steve Jobs director, Danny Boyle. “A combination of Danny Boyle, Alan Sorkin and a bio of Steve Jobs is sort of the perfect storm of creative energies.”

As an 18-year-old university freshman, Graham originally met Boyle after a screening. The director talked to the aspiring editor for 20 minutes. Graham decided not only was Boyle a brilliant filmmaker, but he was also “a wonderful guy.”

Graham has wanted to work with him ever since, so when he heard through the grapevine that Boyle’s regular editor was not going to be available to cut the Jobs film, “I wrote him an overly passionate letter. Boyle reached out to my friend, Stephen Daldry, who I had done a film with. They know each other.” After reading the script and giving feedback, Graham was hired.

The film paints a professional and personal portrait of the deeply flawed Apple co-founder, following him behind-the-scenes of three product launches, culminating in the unveiling of the first Mac.

Working with Boyle, Graham enjoyed creating a unique language for the film. Sorkin had written a distinct three-act structure that was very theatrical, almost like a stage play. But a movie is not theater. A play cannot be shot and then be cinema.

“Danny was the choice you had to have. You had to have somebody who is famous for the kinetic energy of all his films,” stated Graham. “Danny came in, knew it was a brilliant script, but it was theatrical. It was possible that the audience would feel trapped backstage, bored seeing the same six people have conversations.”

Each act had a beginning, middle and end, which posed a chance for the audience to “stop and check out.” The filmmakers had to find ways to keep the audience with them, ways to pull them through the act breaks and into the next story, so that the three stories felt like one story.

The filmmakers added interstitial news footage between the acts as a way of pulling the viewers into the next act of the film. These sections also gave the audience a break from the intense, fast-pace of Sorkin dialog and added unique visuals to the film experience. “It would be a refresher, instead of more of the same,” shared Graham.

With the help of all his departments, Boyle set out to distinguish the acts and make them into a cinematic experience, while still being honest to the script. The cinematographer shot on 16mm, 35mm and the ARRI Alexa to achieve a different look for each act. The actors, particularly Michael Fassbender, worked to find three different performances for the different acts. 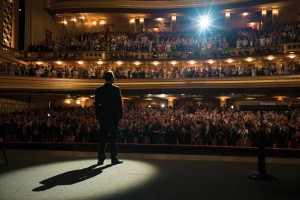 The filmmakers also had to deal with a script that was 190 pages long. That meant getting a three-hour film down to a viewable length. They had to determine a pace for the movie that kept the audience with them.

Sorkin’s dialog also had to be trimmed, which is easier said than done, since every scene had multiple subjects interwoven into the conversations, making it almost impossible to cut. Sorkin’s dialog has a unique cadence that has to be maintained.

“If you lose it, it doesn’t work right,” Graham explained. “But you’re not leaving everything in, so you have to find a way of recreating that cadence in your own unique way.”

In some cases, they edited out entire scenes. That was also tricky in a linear film, but it was important to do whatever served the movie best from beginning to end. To add the visual diversity, early on the team shot the audience at the different locations as well as other unscripted pieces that were not directly correlated to the scene. The editor started finding ways to throw those shots in.

According to Graham, “There was a real worry that we wouldn’t be able to cut away from Steve, to cut away from Sorkin’s scripted sequences, but in fact, cutting away now and then was a real refresher, a cinematic breather. Once we saw that worked, he started shooting more and more pieces. For example, the giant close-up of Steve’s face moving across the screen slowly that’s used at the beginning and end of act two in a metaphorical way to get inside his head. We tried to fire up the cinematic engines.”

The film was shot in continuity order, which was great for the actors, since they had extensive dialog to learn. “That was lovely for me because we got a chance to look at how the film was evolving as we shot it,” shared Graham.

Both Kate Winslet and Fassbender disappeared into their characters, providing Graham with performance options that were “an embarrassment of riches.” Both actors delivered multiple levels of intensity in various takes and had chemistry between them from day one.

From day one, Fassbender came in knowing every line in the script, all 186 pages of dialog. He knew everyone’s lines, not just his own.

“He was a possessed man,” revealed Graham. “In every film, actors flub their lines. That happens all the time. On this film, these guys knew their lines backwards and forwards. And Michael, who had 10 times more dialog than any one else, he was just on fire from beginning to end.”

The team was able to create a real flow in editorial, setting a quick speed for the dialog that was faster than average film pacing. Still, the filmmakers had to retain the subtleties of the characterizations the actors were offering and balance that with the pace.

In The Social Network, the actors were seated in most scenes and paced up the dialog by repeating it at a faster and faster speed. In Steve Jobs, Boyle wanted to give the actors as much freedom as possible, knowing that the dialog would be chopped up and paced up in post. The director embraced much more movement to create energy for a film that had most scenes backstage and in rooms.

“The movement was important. People were not locked into a place where you could say, ‘Repeat. Repeat. Repeat.’ He had a steadicam for 80% of the film, following the actors. He would shoot the scenes all the way from beginning to end,” explained Graham. “Almost every take of the film was an entire scene. Boyle was giving the actors the freedom to move at the pace that felt right for them.”

The biggest challenge to Boyle and Graham in the editing boiled down to “moving at a rocket pace while giving the actors a chance to breathe.”

Graham came away with the feeling that the film was tough, but a joy at the same time. “Danny is an inspiring leader, but most importantly he’s just a really kind man. Like a schoolboy, his enthusiasm is catching. He just wants you to bring everything to the table every day.”

Producer Joel Paisner has joined the boutique visual effects studio Jogger. Based out of Jogger Los Angeles, Paisner will work closely with the producing teams in the Santa Monica, Austin, and San Francisco offices. “Everyone’s really happy to have Joel join us here at Jogger,” Jogger Creative Director Andy Brown said in a statement. “As we have continued to grow, adding Joel to the team has already made a massive […]

A meteor streaks across the Siberian sky, captured by startled drivers’ dashboard cameras. That eerie sight is one of many you will encounter in Fireball: Visitors from Darker Worlds, a movie that explores how meteorites have shaped life on our planet. It’s part of this season’s slate of Apple Original documentaries, now available on Apple TV+. Fireball is the second collaboration between acclaimed director Werner Herzog and Clive Oppenheimer, a professor […]

In 2020, Icelandic musician/composer Hildur Guðnadóttir became the first woman to ever win the Oscar for an Original Score for her work on Todd Phillips‘ smash-hit Joker. Guðnadóttir’s triumph is among the kind of glass ceiling-smashing wins that the Academy of Motion Picture Arts and Sciences has been hoping to see more of in recent years. This year, Guðnadóttir has two fantastic scores in contention, the first of which accompanies Todd […]