According to editor Spenser Averick, he met Selma director Ava DuVernay the old-fashioned way, through a friend of a friend. “She was looking for an editor for her first film and I was looking to be hired for my first project.” Their collaboration has continued ever since. Both filmmakers have the same sensibilities, similar tastes in pacing and believe in staying in the moment.

Averick noted that all their previous films, share a similarity – they are all very intimate. Although Selma is an epic story, much bigger than the small, personal movies the director has made in the past, the film not only related the historic events, but also turned a lens on the details of King’s personal, behind-the-scenes struggles.

“The challenge was balancing the epic and the intimate, trying to make it all feel like one thing,” Averick explained. “I think what drives the film are those intimate moments of inner conflict and intimacy, those moments of doubt, the human moments. That’s what we do. That was our goal. That’s the staple of an Ava DuVernay film.“

DuVernay trusts Averick to “have at it for the first cut.” At the beginning of the production, the editor hoped to screen dailies with the director so that he could get a sense of what she was thinking, but because shoot days were so long, DuVernay could not commit two hours a night for viewing the footage. Instead, they had nightly phone calls after Averick had watched the previous day’s footage in order to confirm enough coverage had been filmed.

Averick edited through production in Atlanta, showing DuVernay a few scenes, but nothing major. He had two weeks after wrap to finish his first edit. They continued on a tight schedule, completing post “almost six months to the day from when they started production.” 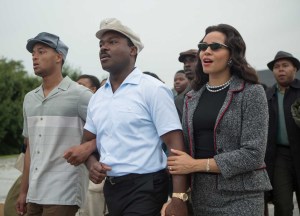 Having worked on mostly small independent films, the filmmakers were unfamiliar with the typical studio workflow. “It did feel rushed at the end, especially when the studio, who were very high on the film during post, decided to expedite the process and show the film at the AFI festival,” said Averick. “That was a great thing, but for us in the cutting room, it was very intense. It expedited an already quick post process.” Essentially they had to finish editing a month in advance to get the film to color and audio so that those departments could complete their work before presenting the movie to an audience.

A few sequences of heightened violence in the film were shot with a Phantom camera in super slow motion. When she shot those takes, DuVernay was not certain how they would be used. She left it to Averick to figure out in the cutting room. In one particular sequence, when state troopers are brutally hunting down protesters, Averick integrated the slo-mo shot into a very fast-paced sequence, adding emotional weight to the action. “It was very effective. Every time I watch it, I choke up,” revealed Averick.

Averick is pleased with some of the slower scenes. Often editing is about knowing when not to cut, learning to “stay in the moment.” Averick commented, “I love the scenes where I’m not cutting a lot, the intimate scenes that Ava and I do so well. Working with these amazing actors, obviously it’s easier not to cut. Staying on their faces for just the right amount of time, getting the perfect amount of emotion out of a scene, those are my proudest moments.”

The events of Bloody Sunday, when the world saw Alabama state troopers attack peaceful protesters, took time to get around the world because journalists of the day shot on film, which was processed for broadcast later. “There was a delay, but it is the same thing that is happening now. We saw a moment when John Lewis went to Ferguson. He was leading a march. We were watching it on our iPad. We looked over at our Avid and we see the actor playing the young John Lewis leading a march on Bloody Sunday,” shared Averick “It was surreal. It added a new layer of importance to what we were doing.”