What director David O. Russell was looking for in the filming of American Hustle was to create a world that would be “juicy, enchanting and colorful,” according to Linus Sandgren, the film’s director of photography. American Hustle is a character and dialogue-driven noirish comedy based loosely on a 1970s government sting operation that snared a bunch of New Jersey politicians that were on the take.

The kinetic script by Russell is full of the fizzy fun of 1930s and 1940s madcap comedies as well as the satirical send-ups of Preston Sturges and Billy Wilder that also have a darker edge. And it required members of the all-star acting ensemble of Christian Bale, Amy Adams, Bradley Cooper, Jennifer Lawrence and Jeremy Renner to constantly interact, often in the rapid-fire fashion of those films.

“David used a few key words for the look of the film,” Sandgren recalled. “He wanted the actors to be warm, interesting and sexy, and he wanted us to love being there with the characters. The aim was to make the world of these characters as sexy, cool and appealing as possible – in this crazy world of lies, honesty, conflicts, friendship, cheaters, lovers, good and bad guys, you would always want to be seduced and sucked into this world, hang out with the characters, and love them.”

Russell, as has been his directing style on previous films like The Fighter and Silver Linings Playbook, both of which won Oscars for best acting, would improvise or make changes on the set during the shoot, fine tuning the acting, rewriting and feeding new lines to the actors as the camera rolled, re-blocking scenes, and sometimes even giving the Steadicam operator shot ideas. “We were working like we were playing jazz, and David was leader of the band,” said Sandgren. “It was a constant rolling process where we found the shots on the fly really.”

The strategy for the cinematographer was to have a camera that could always be where the actors were, and to try to constantly figure out their characters. That took bullseye attention. “Nothing was pre-constructed for how the camera should work or where it should be, the camera had to follow the action,” he stated. “To look into Bradley’s head, for example, to see what he’s thinking you really needed the camera there to be in line with the eye and try to watch as closely as you can. As if you are a little kid that doesn’t have any sense of how close you can be, you don’t leave the actors alone, you try to see if they’re lying or not lying.” 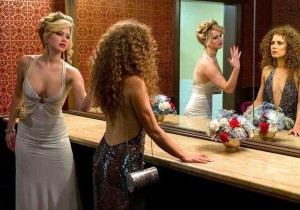 At the same time, Sandgren had to make sure that the actors looked beautiful and also were in the right light. “I wanted the actors to shine the way you think of the enchanting part of the ’70s,” he said. “Everything today is so monochromatic, and I was really intrigued that David wanted the film to be colorful. So gold was a major color in my lighting palette – and that was often the key light – and I always brought in complementary colors, greens and pinks, to complement the gold and enhance the colorfulness to the scenes.”

Russell wanted to be able to shoot 360 degrees on the sets. Since the director could choose to pan to any actor at any time, that created a major lighting challenge for Sandgren. His solution was to scatter light sources. “I would stand in the center of an empty set and work with our production designer Judy Becker, to put practical light sources in the room, along the backgrounds and among the actors,” he explained. “To make sure that any actor we panned to had enough light, my gaffer hung a Chinese lantern from a sound boom.” The white lantern, like you can buy at many stores, was filled with dimmable LEDs, making it easy to dial the color temperature from warm to cool. “It was a great solution. We could pre-light the set in a proper way, and then control the light when we had to,” he said. 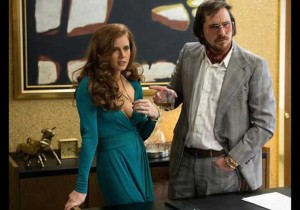 The shoot lasted 42 days and there were 100 different locations, so it was exhaustively fast. Not all of the scenes showed up in the final film. A 3-1/2 hour first cut was edited down to the approximately 2-hour running time of the final version now in theaters.

At first, Lindgren wanted to shoot wide-screen anamorphic, but decided not to because the film magazines last only 4 minutes and have to be constantly reloaded. Ultimately he decided to shoot with a 2-perf film camera that’s similar to 16 mm. And he used vintage glass camera lenses from the ’70s for a bit of a period look. Ultimately the footage was converted to a cinemascope format.

He also shot on Fuji Film, which is known for having more color pop than Kodak. American Hustle has the sad distinction of being the last movie processed by Fuji which closed down its North American film operations earlier this year.

Sandgren is a native of Stockholm who lives in the U.S. He started in Swedish cinema. He shot his his first American feature, Promised Land, for director Gus van Sant last year. Sandgren was the first cinematographer to work with the director, following the death of his long-time DP, Harris Savides who passed away in 2012. Recently, Sandgren finished shooting for another movie icon, internationally renowned Swedish director Lasse Hallström. The Hundred-Foot Journey was lensed in France and India.

“I’ve had the privilege of working in a fairly short time with three great directors, who all have very different styles,” said Sandgren. “Gus lets people bring things to the table. He’s a choicemaker and tries to find authenticity in the world. Lasse likes to experiment and take risks but he’s also a storyboarder and more of a classical director. And David is like a train rushing forward at 180 miles an hour and we’ve all got to hold on, including David. It’s very cool.”