News Ticker
Growing up in Israel, when production designer Inbal Weinberg compulsively watched movies in high school, it was difficult for her to find any real information on what it would be like to have an actual day job in the film business. So she used her imagination! After attending film school at NYU, she worked with the great champion of independent filmmaking, Hal Hartley, and later served as production designer on Blue Valentine (2010), The Place Beyond The Pines (2012), and The Perks of Being a Wallflower (2012), just to name a few.

When asked how she landed the job on Beasts of No Nation, Weinberg relayed, “I was in a cafe in the West Village and Cary (Joji Fukunaga) hired me on the spot. Haha. No, I made a presentation. And I’d met Cary before. I knew his line producer and UPM.” She calls herself lucky and was thankful that Fukunaga was still wrapping up True Detective and needed to crew up Beasts rather quickly. 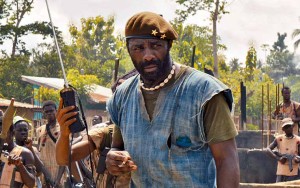 Once the crew made the trip to Africa, the director demanded they follow some sort of visual research to get started. Because Ghana is an under-documented area, Weinberg and her crew walked around to locals’ homes and asked to take pictures of their quarters. It was a bit of a culture shock for everyone. Although no definitive decade or country within Africa is clearly mentioned in Uzodinma Iweala‘s 2005 book or Fukunaga’s adaptation, the director was very involved in the production designer’s process and uniquely precise. He wanted Weinberg to base the visuals on the Sierra Leone wars of the late 1980s into the ’90s. This was not to be known to the audience, per se, but this gave her tons of photos as a point of reference.

“There was a lot of good will and everyone was super kind to us,” Weinberg reminisced. “But it was a very difficult film, rarely having electricity or internet and the challenges of working in an unknown place, how to work with the local crew and community and trying to find a middle ground. Though Ghana is fast developing, there aren’t many traditional shops, and just buying a lamp is difficult. The crew became good and confident at buying at local markets. There was a large learning curve of course, but not much time to learn, because you had to be doing.” Not to mention the giant bugs, rain, snakes, malaria, and Idris Elba nearly tumbling off a cliff. 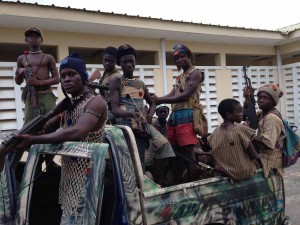 Beyond the usual day on the set, Weinberg relayed that during the four months she spent in Ghana, the most challenging parts were the two weeks clearing large passages of jungle in order to set up the scenes where the Commandant (Elba) would address his boy soldiers, as well as building the rebel and refugee camps respectively. That and the fact there was no food truck! Pfft. Showbiz.

On such an arduous shoot, what Weinberg is most proud of however, is that they were able to deliver Fukunaga’s zealous vision. It was an imaginary country, so if you look closely, they even created the fictitious land’s money, insignia, political propaganda, posters, imaginary leaders, and all the intricacies we take for granted when we walk outside our door every day. Just to pull that off would be an astounding feat for any production designer, and no doubt awards would be merited, but for Weinberg, the experience was more valuable than she could ever imagine growing up as a little girl. It was never just a job – it gave her clarity.

Siren Lab Productions Launches On The Heels of VFX Effort for Netflix Original Film, Beasts of No Nation

November 6, 2015 Staff Facility in Focus, News, Visual FX, Who's Where? Comments Off on Siren Lab Productions Launches On The Heels of VFX Effort for Netflix Original Film, Beasts of No Nation

If it would seem unlikely that studios would release two westerns at Christmas time, it might be unlikelier still that both would belong to that smaller sub-genre of “snow westerns.” Yet both The Revenant and Quentin Tarantino’s The Hateful Eight find themselves in that same unique niche occupied by such under sung classics as Sergio Corbucci’s The Great Silence and Robert Altman’s McCabe and Mrs. Miller. […]

In directing Chi-Raq, Spike Lee takes on the rampant gang violence plaguing Chicago using bold choices in his present-day interpretation of Aristophanes’ Greek satire, Lysistrata. As in the original play written 2,500 years ago, a group of women vow to boycott sex with their men until they put down their weapons and end the bloody carnage. The provocative title – street-slang that combines “Chicago” and “Iraq” – depicts the blood-soaked reality of life in an urban community that has become a war zone. […]