“Once you’ve picked up the Bible, you’re asking for it as far as commentary goes,” production designer Mark Friedberg admitted. In the end, of course, Darren Aronofsky’s Noah defied these concerns, thanks to Friedberg’s collaboration with the director to produce such a believable, yet powerfully allegorical world.

Despite a healthy $125-million budget, there was a year of prep, “not necessarily by design, more a matter of finding a methodology of making the movie affordable,” Friedberg continued. Crew at this stage included designers and illustrators in New York, Los Angeles and Canada, including veteran artist Craig Mullins. “It’s a huge scope, but for $125 million, there’s a lot of expectation from the viewers and the studio that it delivers on that level.”

“When we started it was a stage idea, with the thought that it would be digitally extended. Then we found a forest” – the Planting Fields Arboretum State Historic Park – “in a part of Long Island… the trick was to make it not look like an old forest.” The production also shot for a month in Iceland, which is “amazingly stark and beautiful. While we’re making a movie about the past, Iceland is actually the newest land in the world, it’s primal. It’s a terrific place to do what we do, they have very good crew and they’ve become a real destination.”

Eventually, the film would be shot in New York and in Iceland. “The studio was interested in us going to Toronto, or somewhere cheaper. We looked at London, but Darren really wanted to make it in New York,” a welcome decision. “New York is my home. The crews we work with there, I’ve been working with for 25 years. I’ve never had the kind of collaboration with, say, painters that I had there.” Friedberg described scenic chargeperson Elizabeth Linn as “one of the most talented painters I’ve ever worked with.” A history like this makes for fond memories. Noah art director Alex DiGerlando “started as a PA with me on Far From Heaven, and has since gone from being a student to a teacher.” L.A.-based supervising art director Dan Webster moved to New York for the production, replacing a regular Friedberg collaborator who was working on the 2012 Olympics at the time.

“We were trying not to set it in a particular history. We were not trying to say what planet we were on, so it would have meaning for the world we live in now.” The filmmakers were clearly aware that the earliest traces of the Noah mythology, in Mesopotamia, predate the Bible by thousands of years, and chose not to link their design to any particular historical period. “Darren made a big point of no robes, no sandals, no bears. It’s a world between worlds that had pushed itself to brink.” As such, designs included not only pseudo-historical choices but also sparse elements of technology, suggesting remnants of a more advanced civilization. These are particularly clear in an early scene depicting a ransacked mining facility. “We ended up going through industrial marine yards in Iceland.” 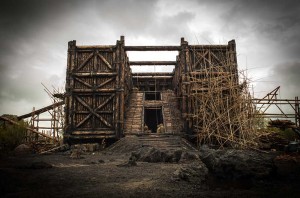 The ark itself is the scenic centerpiece of the production. Based on the three-deck structure described in the old testament, it’s “A box. A storage facility without the need of a keel or any directional control.” For this reason, the filmmakers avoided the traditional boat-shaped ark. Despite the fact that only one end of the ark was actually built, “It was a very significant steel framework. The one we built had to literally withstand a hurricane, because Hurricane Sandy hit while we were filming.” The ark’s interior, separately constructed on a sound stage, was built under the supervision of construction coordinator Nick Miller.

After the grand scale and success of Noah, Friedberg’s diary remains filled with films on a variety of scales. Ava DuVernay‘s Selma, a story of civil rights in early-20th-century America, will be released in February. Also in development is the Ang Lee film Barry Lynn’s Long Halftime Walk, to be shot in Georgia and Jordan. Friedberg relishes the contrasts. “As you get older, and people come to you with bigger things, you think – in my heart the smaller independent cinema is the type of movie I go to see, and Noah was made in that spirit.”

The Nolan Brothers Discuss the Making of Interstellar

Set in a post-apocalyptic future earth in which the planet’s ecosystem is failing, warranting deep space exploration, director Christopher Nolan’s ninth feature film, the science-fiction epic Interstellar positions science as its key element in a manner unlike many studio films to date. Indeed, akin to the rare breed of sci-fi picture found in features such as 2001: A Space Odyssey, Contact, Solaris, Gravity and Nolan’s own Inception, this new film takes the audience on an unexpected journey to new worlds, different dimensions and sharply shifting time periods. […]

In his latest movie Mr. Turner, British director Mike Leigh immerses audiences in the early 19th century world of J.M.W. Turner. Turner is considered to be one of England’s greatest artists as well as the precursor of Impressionism, and is known as “the painter of light.” (His final deathbed utterance: “The Sun is God.”) Painterly, light-filled and ravishing, the cinematography of Dick Pope, the film’s director of photography, is appropriately anchored in the distinctive color schemes, subject matter and illumination used by the artist. […]

In talking about The Homesman – his third collaboration with actor/director Tommy Lee Jones – composer Marco Beltrami shared his satisfaction with their creative partnership. “I respond first off to his writing, his script, the way his mind puts things together. I respond to his quest for creativity and originality.” […]