News Ticker
Showing the un-showable, but not the unwatchable. That was the taut tightrope that Hungarian director László Nemes had to walk to make Son of Saul, a movie that gives more than a glimpse of what it was like to live and die inside the Auschwitz-Birkenau concentration camp, where the Nazis systematically murdered several million Jews.

The approach he arrived at after nearly a decade of grappling with the subject matter (derived from a series of eyewitness accounts known as the “Scrolls from Auschwitz”) was to focus the fictionalized plot on one individual, Saul Ausländer, and stick to his point-of-view, throughout, leaving much to the imagination of the viewer.

The story is seen almost entirely through his eyes. He has been made one of the camp’s Sonderkommandos – Jewish inmates forced by SS troops to lead thousands of daily arrivals to the gas chambers and afterwards remove and burn the corpses. To find some kind of transcendence from his unspeakable predicament, he salvages the body of a boy from the flames of the crematorium, taking him as his son. He then tries to somehow get him buried with the dignity of a traditional Jewish funeral.

The film is Nemes’ first full-length feature as a director, which seems extraordinary. During a multi-year prep he created a dogma or set of rules for the shoot, which the cinematographer and production designer adhered to. “The film couldn’t look beautiful or appealing in any way, but the intent was also not to make a horror film,” said the director. “That meant the camera would strictly stay with Saul’s point of view in what he sees and hears, not going beyond his own field of vision.”

The film does not try to describe the magnitude of the Holocaust, but the simple story of one man caught in a dreadful situation, in a limited framework of space and time, he observed. “The use of shallow focus photography, the constant presence of off-screen elements in the narration, the limited visual and factual information the main character and the viewer can have access to – these were the foundations of our visual and narrative strategy,” said Nemes. “We had to always remain at the character’s eye level. The camera is his companion. It stays with him throughout this hell.’ 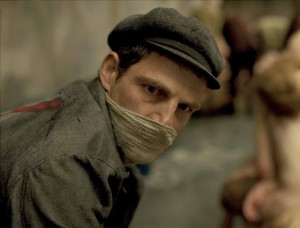 A Sony Pictures Classics release that opens in theaters Dec. 18, Son of Saul is Hungary’s entry for the best foreign film Oscar and earlier this year won the Grand Prix at the Cannes Film Festival. It also has been named on a number of year-end critics lists as the best foreign film of 2015. 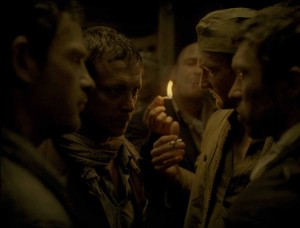 Budgeted at a just $1.4 million, the movie was a shot in only 28 days on sets and locations on the outskirts of Budapest, including a forest where a climactic uprising of Sonderkommandos, based on real events, takes place as Saul tries to find a burial spot for his surrogate son. DP Erdély shot on film using two different Arri 35mm cameras – the Arricam LT and a smaller Arri 235. “We wanted to use traditional 35 mm film and photochemical processing at every stage,” said the director. He continues to be a passionate advocate of celluloid, and for now, declines to get on the digital bandwagon, despite the onrush of the technology. “The challenge was to strike an emotional chord in the audience – something that digital doesn’t allow for,” Nemes stated.

The cinematographer was also the camera operator and shot handheld. He used a 40 mm lens which focused precisely on the image at hand at the same it made for a very shallow depth of field. Thus the more disturbing images, such as naked dead bodies, were seen very blurred in the background. “We didn’t want to create this kind of imagery too vividly, relying instead on the imagination of the viewer, who has a more personal experience.”

As for illumination, “we used diffused industrial lighting and kept it as simple as possible,” said the director. DP Erdély shot in a restricted 1:1.33 aspect ratio so as not to widen the field of vision. The film was shot in long takes. There are only 85 shots in the 107-minute movie, though none lasts more than four minutes. 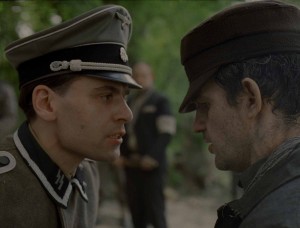 Taponier, the editor, was on the set during much of the shoot. “Matthieu and I had extensive discussions on how to go from one immersive situation to another,” said Nemes. “We cut according the gaze of the main character, like when he starts looking around to find a way to realize his quest to bury the boy.”

Costume designer Szücswas was tasked by the director to vary the apparel as much as possible. “In films about the camps, most of the time all the uniforms all the clothes look alike,” Nemes noted. “I wanted clothes that didn’t look the same, that included the uniforms of the Nazis.” As for the Sonderkommandos, they were allowed to take clothes from the dead as one of their minor privileges. “So we wanted to preserve this variety of picked over items in their costumes to make them more realistic.” 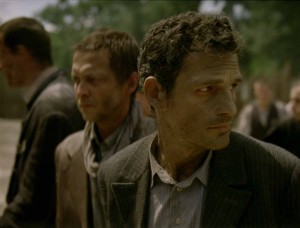 Nemes wanted production designer Rajk to make everything look very realistic, not stylized. The main set is the crematorium and its surroundings. “László based our production design on old documents that described the Auschwitz ovens in detail,” said the director. He already had experience with the look, having designed the permanent Hungarian exhibition at the Auschwitz-Birkenau State Museum.

“We didn’t want to build the entire crematorium. It would have been too big, especially on our budget,” said Nemes. “We really wanted to have the textures and colors and the feeling and the logic of spaces inside and outside the crematorium. We knew we couldn’t recreate it inch by inch, but we wanted to preserve the functionality of the crematorium complex – to show the spaces between the furnace, the changing room, the so-called showers and the surgery room.” 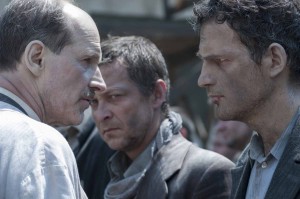 A multi-level set was built, with all the levels connected. “I wanted to have a building, where we didn’t have to cut from one level to the next. I wanted everything to be in the same place to preserve the organic of feeling of immersion of the film,” he said. “But I also wanted to give the impression that we were in a real place, which turned out so much so that the cast and crew reacted emotionally and felt they were on a mission. “

Nemes made sound design an important element in the production of Son of Saul. “I spent five months with Tamas, our sound designer,” he recalled. “It was very painful and very difficult. He was very intuitive and approached it like music.” Zanyi used direct sound from the shoot, but then attached sounds most of which were made from human voices. “It was very important that we had this Babel of expressions, the sounds, the whispers and the shouts in all kinds of languages.”

“Images, are very restrictive,” he observed. “But the sound suggests there is much more than the image, the sound gives a reference point to what’s really going on, the infinity of suffering that is there. There are always sounds and noises that refer to the crematorium, the machinery of extermination. These sounds change and evolve, and it seems like there is a beast living there.”

More than any film in memory, Son of Saul takes the audience into the heart of Auschwitz-Birkenau, the notorious death camp where the Nazis murdered millions of Jews during World War II. The story is seen almost entirely through the eyes of one individual, Saul Ausländer. He has been made one of the Sonderkommandos – Jewish prisoners forced by the SS to lead thousands of daily arrivals to the gas chambers and afterwards remove and burn the corpses. He tries to find moral solace from his unspeakable task by salvaging from the flames the body of a boy he takes for his son, and attempts to have him buried with dignity. […]

Jay Roach Tells A Parable Of Our Time With Trumbo

Set over a multi-year period starting in 1947, Trumbo explores the effects of that era’s communist witch-hunt on the life of Dalton Trumbo (Bryan Cranston), Hollywood’s top screenwriter, after he and other writers are blacklisted for their political beliefs. The film reveals how Trumbo used his talents and humor to expose the injustices of the blacklist, which entangled Hollywood luminaries from gossip columnist Hedda Hopper (Helen Mirren) to actors Edward G. Robinson (Michael Stuhlbarg), John Wayne (David James Elliott) and Kirk Douglas (Dean O’Gorman) to director Otto Preminger (Christian Berkel), as well as multiple others. […]

JL Pomeroy Looks Back at 40 Years of SNL in Live from New York!

For 40 years, NBC’s Saturday Night Live has been an institution of comedic genius, producing American popular culture’s most memorable comedy characters and sketches while creating a host of monumental stars in its wake, many of whom have gone onto iconic careers on their own television series and feature films. […]