Online submissions are now open for the Location Managers Guild International’s 6th Annual LMGI Awards. honoring the outstanding and creative visual contributions of location professionals and film commissions in film, television and commercials, the awards show will be held on September 21, 2019 at the Broad Theater in Santa Monica.

With the change in date of this year’s LMGI Awards from April to September, the 6th Annual LMGI Awards timeline is unique in that there is an 18-month calendar of eligibility. Productions that were first released between January 1, 2018 and May 31, 2019 are now eligible. Nominations will be announced on Thursday, July 11, 2019. 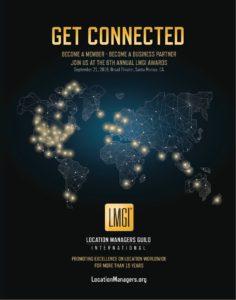 Eligible productions must feature locations that are artistically integral to the story being told, and Location Professionals nominated must have demonstrated an innate understanding that the proper location is not only a backdrop for action, but also sets tone, reveals character, and enhances the narrative.

LMGI Awards accepts domestic and international submissions for work that demonstrates the significance of locations in supporting character development and storyline. Active and retired LMGI members in good standing can vote on the awards. Submissions are open to LMGI members and non-members alike.

For more information, or to submit work, please visit www.locationmanagers.org

Ma Rainey’s Black Bottom, the Denzel Washington-produced film based on the August Wilson play, is a technical delight in addition to an acting powerhouse. As previously reported, the film covers a particular episode in the famed singer’s life (played by Viola Davis), as she was trying to make a record in a Chicago studio in the summer of 1927, although the movie was actually shot in Pittsburgh. To help, she enlists […]

Back to Work:  Traction Guest CEO Keith Metcalfe on Using Software to Track Comings and Goings from Set

Over the past few months, Below the Line has been offering our readers some new ideas and technology for dealing with the new safety protocols necessary for making sure film and television production can safely reopen. Today, we’re looking at another way to keep your set safe and secure via software created by Traction Guest, a company that specializes in employee and visitor  management systems, including a newly-launched Frontline mobile […]

In The Fabelmans, Director Steven Spielberg invites the audience to find out what shaped him, warts and all, into the famous filmmaker he is today. We meet his surrogate family, including his mother Mitzi (Michelle Williams) and his father Burt (Paul Dano), as well as his grandparents and sisters, and we see them all through a very personal lens as Spielberg’s own stand-in character, Sammy Fabelman (newcomer Gabriel LaBelle), endeavors […]