“New developments in the science of motion picture photography are not abundant at this advanced stage of the game but periodically one is perfected to make this a greater art.”
~ Gregg Toland, 1941 in Theater Arts

In 1941, cinematographer Gregg Toland approached Orson Welles, asking the director to let him shoot Citizen Kane. Toland wanted to experiment with some techniques he knew the studios would not allow him to use on any other film and guessed, rightly, that first-time director Welles would be open to letting him try. The most important of these innovative techniques was deep focus cinematography, made possible by developments in lens technology and high speed film that allowed an entire set to appear in focus, whether 18 inches from the camera lens or 200 feet away. It made for remarkable viewing and cemented Welles’ and Toland’s place in Hollywood history.

Seventy-three years later, filmmakers continue to innovate and the style of Birdman is an excellent example. The film, directed by Alejandro González Iñárritu with DP Emmanuel Lubezki, was produced with the conceit that it would look like one continuous take. Obviously impossible, the movie does a great job of following Riggan Thompson (Michael Keaton) and his Broadway play castmates and crew from dressing room to stage, through dim corridors, and out onto the streets of Manhattan, all in what seems like continuous time. Occasionally the cuts are obvious – when the screen is empty as Mike (Edward Norton) and Sam (Emma Stone) walk through the maze of hallways in the St. James Theatre looking for a place to make out or when the bright light of the sun fills the screen with light – but the flow is never broken. 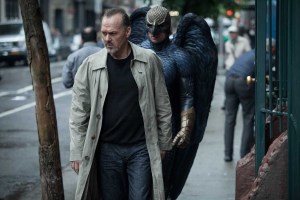 All this required technical skill, not least of which was how visual effects would serve the illusion of the stream of unbroken action.

“Alejandro wanted to make us feel like we’re walking through life with this character, spending hours and days together as we do in real life,” said Ivy Agregan, VFX producer. “To achieve that we had to do some VFX to have the sensation that the camera never cut. That way, we feel like we’re there, experiencing his trials and triumphs.”

Agregan and the rest of the team that created the VFX for Birdman is up for a VES award for outstanding supporting VFX in a photoreal/live action feature motion picture. The other nominees are Jake Braver, and Ara Khanikian and Isabelle Langlois, both of the Montreal post house Rodeo FX, the sole VFX vendor on the project. The 13th Annual VES Awards Gala will be held in Beverly Hills on Feb. 4.

For a character-driven movie, which explores the inner turmoil of an aging actor, it is surprising how important visual effects are to the film. From the opening scene, in which we see Riggan meditating and levitating in his dressing room as a voiceover taunts him, VFX are front and center. We are led to believe that he has magical powers, leftover from his days as the star of the imaginary Birdman franchise of films from the ’90s. We hear the gruff voiceover repeatedly and realize that Riggan is hearing the voice in his head and is, quite likely, suffering from mental illness. It is late in the film when we finally get to see the embodiment of the voice, the Birdman character himself, with a lycra suit, wings and mask. He can fly and encourages Riggan to reclaim the superpowers that never really left him, leading the actor to take wing in his trench coat, hovering gleefully over the streets of Midtown.

“One of the big rewards for this kind of work is that almost every frame is a VFX shot, not just the obvious ones,” said Khanikian, VFX supervisor for Rodeo FX. “It’s there solely to support the story. We delivered 90 minutes of content – only about 12 minutes didn’t go through our pipeline. We did so much VFX work on this film and most of it is not supposed to show.”

The number of shots that Rodeo FX completed for the film (46) belies the work involved, as almost every shot is an entire scene. Most shots were between 4,000 and 7,000 frames, with some as long as 11,000. This meant there were many different plates and elements to stitch together within and between each shot or scene.

“Visual effects touched 90% of the frames in the movie, which is unusual,” Agregan explained. “Every time we did something we had to render a huge amount of data, then push it from Montreal to L.A.”

Khanikian identified three types of stitches required to maintain the impression of one continuous take, all of which required VFX work. Throughout the movie, actors are moving from place to place and, though these location transitions look like continuous movement, the principal photography involved separate scenes shot individually. A door is opened, Riggan moves from the corridor onto the stage or Mike turns a corner and is somewhere else: all of this required stitching.

“Emmanuel Lubezki was already familiar with this approach, having used it on Gravity and Children of Men,” Khanikian said. “He knew we were going to need to stitch scenes together and shot it with this in mind.”

There are three CG-intensive time lapses in the movie, each of which needed to be rendered to make the seams invisible. At one point, a distraught Riggan leaves the theater at night, drinks heavily and rests on a stoop. The camera pans up to the facade of the building behind him, the sky lightens, and it’s the next morning, with Riggan asleep on the stairs. The illusion of continuity is intact, keeping us with him on his journey through time.

Rodeo FX, from its extensive film work, is familiar with the third kind of scene connection, common to most movies, in which different takes of a long scene are blended to give the illusion that the scene was filmed in one take. 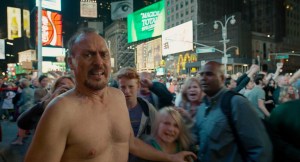 Much of the action in the film takes place in dressing rooms, where mirrors reflect actors and the rooms behind them. For those not well-versed in visual effects techniques, these scenes appear to be untouched by obvious VFX. We watch the action, not taking into consideration that the entire crew and its equipment would have been reflected in the mirror and need to be removed. This is the sort of postproduction achievement that makes or breaks a film, and yet it is invisible to the viewer.

“This was extremely challenging work,” Agregan said. “The camera was right behind the actors, showing the whole crew. Every single mirror had to be replaced, taking out the crew, and then using photogeometry to put elements back in. It was a lot of roto, and heavy to do.”

Everything that was filmed in the mirrors had to be digitally removed, recreating a CG environment. The most challenging of these mirror scenes was the one in which Lesley (Naomi Watts) and Laura (Andrea Riseborough) comfort each other in front of a dressing room mirror. Everything in the mirror was rotoscoped out, then replaced with a digital asset of the dressing room that we see in the mirror.

Agregan, who is once again working with Iñárritu and Lubezki, this time shooting The Revenant in Calgary, is excited about the VES award nomination.

“Alejandro is a creative who constantly challenges you,” she said. “I’m thrilled that we’re being recognized for something that is integral to the story without being obtrusive.”

The scene that Khanikian points to as one of his favorites is a long shot down a dimly lit corridor as Riggan walks to his dressing room after another disjointed preview of his show. With its long slow progress and perfect focus from one end of the hall to the other, it is a scene reminiscent of what Toland accomplished in Citizen Kane, but with a modern-day twist he could only have dreamed of in 1941.

“We’re staring down the hallway at a pile of things Riggan has destroyed,” Khanikian said. “Everything stops in this scene and all we hear is the wind. All the stuff he ruined from his dressing room are CG props.”

It’s fitting that this artist, up for a VES award, should point to something that might otherwise completely pass us by.