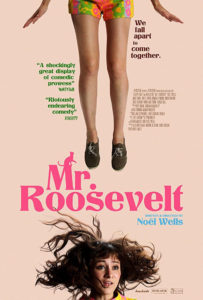 If you’re looking for a film that embodies comedy with the sarcastic turns of real life, look no further than Mr. Roosevelt. From the beginning of the film, Emily Martin, played wonderfully by writer/director Noel Wells, is seen as a quirky and naive comedian looking to make it (although appearing to be failing) in Los Angeles. She abruptly has to return to her hometown of Austin, Texas to attend her cat’s funeral, being thrown by her ex-boyfriend.

Once at home, it becomes clear that Emily has no idea how life in Austin has been without her presence. She immediately steps into the new life of her ex-boyfriend, Eric (Nick Thune), and his new partner, Celeste (Britt Lower). Emily automatically feels some resentment towards this new relationship, which is demonstrated in perfect comedic timing by Wells. Most of the moments throughout the film are a bit cringe-worthy due to the fact that Wells “wants the movie to seem as realistic as possible,” but do not let that deter you from watching this film. This energetic comedy will have you laughing non-stop at the awkwardness of life. Along with the central plot of Emily having to witness Eric’s new “perfect” relationship, she also makes a new best friend in Jen (Daniella Pineda), who saves her while she’s having a panic attack at a restaurant. The chemistry between these two is hilariously apparent as soon as they appear on screen. This friendship causes Emily to attempt to get back to her native roots. 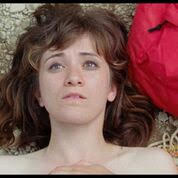 Emily’s journey ties into her inability to cope with the loss of her cat, Mr. Roosevelt (yes, the namesake of this film). Her character progression is mirrored with her level of understanding of what happened to her cat and why she left him there without a second glance. Emily doesn’t seem to understand the attachment Celeste has to Mr. Roosevelt, which is a parallel for her not understanding what Eric can possibly like about Celeste. Once Emily finally starts to let go of Mr. Roosevelt, she starts to have a better attitude about the rest of her life and the one that she left behind.

Noel Wells directorial debut displays her ability to infuse comedy into reality in such an authentic way that most people can relate to. In Mr. Roosevelt, Wells’ quirkiness becomes evident throughout her directing style and plays a prominent part throughout the storyline. According to Wells, “life is very embarrassing,” and why not showcase that in a film. Mr. Roosevelt is a perfect example of trying to remember who you once were. This seems to be Emily’s struggle throughout the film, and we can see her trying to remember parts of her old life, while still trying to exist in her new one. The film evokes feelings of nostalgia for times past, as well as excitement for where Emily’s new journey is going to take her. Wells did an excellent job of combining the two to create a story that reflected real people dealing with a unique reality. Considering Mr. Roosevelt is Ms. Wells’ first taste of life in the directing world, I can’t wait for what she comes up with next.

The International Alliance of Theatrical Stage Employees (IATSE) has endorsed Hillary Clinton for President of the United States. […]

The Post New York Alliance (PNYA) continues its regular online “Post Break” Webinar series this Thursday, October 15 at 4pm, with a rather apt and timely topic titled,  Building Mental Resilience in the Age of COVID. You can register for the free video conference here. Only a few days after World Mental Health Day, PNYA is offering a few strategies for dealing with the unprecedented stress most of us are feeling right […]

September 8, 2022 Edward Douglas Crafts, Direction, Director Series, Featured, Film, Industry Sector, Interviews Comments Off on Barbarian Filmmaker Zach Cregger on How He Made One of the Year’s Craziest Horror Films With the Help of a Bulgarian Crew

Zach Cregger spent many years making the series The Whitest Kids U Know, writing and directing most of the episodes with the late Trevor Moore. The two of them also co-directed a few comedy features, but none of Cregger’s past work hinted at the horrors that lurk within his new movie Barbarian, which hits theaters on Friday. The creepy genre film stars Georgina Campbell as Tess, who arrives at her […]