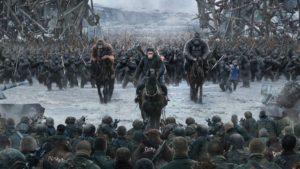 “We are immensely proud of this work and grateful to the Academy for recognizing War for the Planet of the Apes with a nomination,” said Senior Visual Effects Supervisor, Joe Letteri. “This is the final film in the trilogy, and we’ve been really happy to see how audiences have been swept up by the emotional story of Caesar and his fellow ape characters.”

“We are thrilled with the recognition this film’s visual effects have received, and this nomination is truly an honor,” added Visual Effects Supervisor, Dan Lemmon. “We pushed the limits of our technology and our artists as we worked to create characters that were visually realistic and emotionally authentic.”

Weta Digital is proud to see its work on War for the Planet of the Apes nominated in the Visual Effects category for the 90th Academy Awards®. The final film of the recent Planet of the Apes trilogy marks the end of Caesar’s journey as the leader of the apes and Weta Digital’s work with this iconic cast of characters.

Weta Digital is also part of the team on Guardians of the Galaxy, Vol. 2 and would like to extend congratulations to Guy Williams and the rest of the team on the nomination!

“The ADG Awards is one of the awards season’s premier events and we are thrilled to be sharing the news live from the red carpet with audiences around the world,” said ADG President Nelson Coates. “This year’s nominees have raised the bar for creative excellence and the ADG is looking forward to spotlighting their wealth of extraordinary work. Kathleen Kennedy, who was honored with the Cinematic Imagery Award […]

Welcome to February! Most of the weekend was about the goings on at the Sundance Film Festival, which usually books every theater and auditorium in Park City, Utah. This year, the festival went virtual instead with people from around the world watching the various world premieres on their computers or television sets. The festival showcased some great docs like Marilyn Agnelo‘s Street Gang: How We Got to Sesame Street, Edgar Wright‘s musical […]