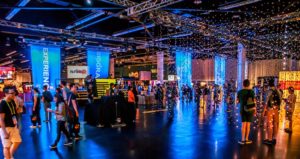 From July 24th to the 28th, at the Anaheim Convention Center, professionals in computer graphics and animation converged at the 43rd annual conference SIGGRAPH 2016 to take in the latest in visual effects, gaming, virtual reality and even some applications using satellites and motion-predicting drones. The event attracted over 14,000 artists, game developers, filmmakers, students and academics from 73 countries. It also attracted some veteran Hollywood professionals, like Technicolor’s Josh Pines who said he was looking for, “The next big piece of stupidity to hit us all.”

There were the yearly SIGGRAPH highlights, like the Technical Papers Fast Forward on Sunday that was standing-room only. On Tuesday the conference screened the premiere of Walt Disney Animation Studios’ new, animated film Inner Workings to an enthusiastic audience.

Of the twenty six categories that were covered at this year’s conference a few stood out and drew big audiences. Augmented Reality and Virtual Reality panel discussions and seminars drew large crowds and a healthy set of questions from attendees.

There’s still a large lag between reality of the Hollywood system and the mentally augmented reality of applying these new technologies at hand. But with SIGGRAPH the industry is getting closer to bringing together the young and vibrant explorers with the more realistic industry veterans who work tirelessly each year for long hours on sets and inside post houses creating and finishing the content projected and streamed every day at the ease of a remote control. It’s easy to forget how complicated the marriage of live action and digital imaging is, and that behind every keyboard, mouse and camera is a person working passionately to figure it out.

If you didn’t make this year’s conference, SIGGRAPH 2017 will be in Los Angeles, at the Los Angeles Convention Center July 30th through August 3rd2017.

Hosting the 32nd ASC Awards, Ben Mankiewicz of TCM and great fan of cinematography, set the tone and entertained the room. “I’m honored to be asked to host the ASC awards, and even more so when I learned that none of tonight’s nominees had to be replaced by Christopher Plumber. Congratulations to all of you. This is a great partnership – TCM and the ASC.” Dean Semler, ACS, ASC, who shot […]

For Mary Poppins Returns, one of the biggest challenges was making the spoken word smoothly transition into the musical sequences. Once the sound and music editing teams prepared all the dialogue and production tracks, singing pre-records, ADR, hard effects, ambiances, foley and music tracks, the various audio elements had to be combined in a process that makes a grounded, believable soundtrack. That was where re-recording mixers Mike Prestwood Smith and Michael Keller came in. […]

The Accidental Turitz: It’s a Bummer There Aren’t Enough Movies This Summer Due to Hollywood’s Lack of Counterprogramming

May 25, 2022 Neil Turitz Accidental Turitz, Columns, Featured, Film, Industry Sector Comments Off on The Accidental Turitz: It’s a Bummer There Aren’t Enough Movies This Summer Due to Hollywood’s Lack of Counterprogramming

I’m seeing Top Gun: Maverick for a second and third time over the next few days because I loved the movie so much the first time, and while I’m excited to see it again (and again), I’m just as excited to go back to the theater at all, given how few opportunities there seem to be this summer. Last week, I wrote about the embarrassment of riches we’re enjoying (or being overwhelmed […]