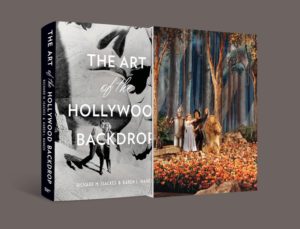 The Art of the Hollywood Backdrop, the new book by Richard M. Isackes and Karen L. Maness, takes readers behind the scenes of some of the most iconic movies ever made and offers unique insights on how they were made. A combination of essays (twelve in total) and gorgeous photography, the tome is both a history and illumination of the ‘art’ of background art.

The book starts with a broad yet specific sweep over the scenic arts, detailing the origins of the craft, and its forerunners, such as the World War II veterans hired at MGM, and how backings became an industry all its own while forced to change as Hollywood technology progressed. The volume transitions into a more structured treatise on the specific artists and families in the industry: George Gibson, Ben Carré, Duncan Alanson Spencer, the Coakleys, and the Strang family– giants in an industry going as unnoticed by the audience (and Hollywood) as the backings themselves. Substituting melodic notes with captivating images, the book lovingly serenades the oft overlooked constructors of the fantasy worlds we indulge in at home and at the theater.

The Art of the Hollywood Backdrop guides the reader through every level of the profession. From sweeping floors and mixing paint as training in the master-apprentice tradition, to the creation and industry-level politics of competing backdrop companies. Via first hand accounts, the reader is submerged in a world of forced perspectives, foregrounds, and mise-en-scene, all supplemented with photos for the more visually inclined. One such picture is that of the set of Columbia Picture’s Lost Horizon, which was actually “built inside a Los Angeles refrigerated ice-making plant, enabling the snow to be real.” Studying the image challenges you to differentiate between what is real and what is painted onto the backdrop, which is harder than expected, the fore and background blending seamlessly — highlighting the skills the book aims to celebrate.

Until recently, scenic artists got little to no credit for the work they did for film, but this book is a good step in rectifying that. It’s one of those things you read, either out of respect for the craft or due to a general interest in Hollywood history, and find yourself knee deep in a whole world you never realized existed, expanding your lexicon and vocabulary without even realizing it, and emerging out the other side confident that you too can talk about scenery with the best of them.

Based on Jordan Harrison’s play, Michael Almereyda’s Marjorie Prime was filmed in and around a house on Long Island, New York’s southern fork in an astounding 13 days. Concerning a near future where holographic representations of deceased family members are manifested to pacify loved ones, Marjorie Prime centers around four main characters played by Lois Smith, Jon Hamm, Geena Davis and Tim Robbins. “They have memories that we get to […]

The International Alliance of Theatrical Stage Employees (IATSE) and the Association of Independent Commercial Producers (AICP) concluded negotiations last week on a new three-year contract covering TV commercial production across the US. The new agreement became effective October 1, 2022 and expires September 30, 2025, with terms going into effect on October 30, 2022. Additionally, the two parties reached a Neutrality Agreement and Procedures which could lead to Voluntary Recognition […]

Set in a mythical New England town founded by British colonials, Rutherford Falls examines the clash of cultures between the original Native American inhabitants and the corporations who have taken financial control of the area. The 10-part series is full of whimsical comedy, but hits unexpectedly dark themes as well. Co-creator and executive producer Sierra Teller Ornelas is one of five Native Americans writing for the series. The other co-creators […]