Hungarian cinematographer Marcell Rév, HSC, has been working with filmmaker Sam Levinson since the Sundance-premiering Assassination Nation. Their second collaboration was the Emmy-winning HBO series Euphoria, starring Zendaya. Once the pandemic hit, production on Euphoria was forced to shut down, but with the creative itch for getting back to work, Rév signed on for their third collaboration together, Malcolm & Marie.

Starring Zendaya and John David Washington, Malcolm & Marie is about a filmmaker and his girlfriend returning from the world premiere of his newest film. They get into an argument while waiting for the first reviews to drop. While discussing some of his post-premiere conversations with film critics, Malcolm rants about what stories Black filmmakers are allowed to tell and the filmmakers they get compared to.

Rév spoke with Below the Line to discuss Malcolm & Marie, talking about the decision-making that went into shooting the film in black and white and on Kodak Double-X stock. He also told us about some of the films they paid homage to, although the quickness of the film’s production meant not having the time to watch those films ahead of time.

Below the Line: This is your third collaboration with Sam Levinson. How has your working relationship changed over the years?

Marcell Rév: We met each other four years ago. The first project together with a new director — it’s always the first couple of weeks are getting to know each other and understanding what a director tries to achieve with a certain project. As you move on to the next project with the same director, that getting to know each other, trying to figure out how someone’s brain works — you don’t need that phase anymore so that speeds up certain things. I think we learned a lot from each other as well. I definitely learned a lot from Sam. It’s not just getting to know him — it’s more understanding his world and also understanding my world through his eyes a little bit better. I think that’s been a great journey in the last four years.

BTL: Maybe it’s because of my love for Hollywood’s Golden Age but one of the things I love about Malcolm and Marie is that the film is shot in black and white. How did you come to a decision to use the Kodak Double-X stock?

Rév: I think the first decision was the black and white, which was more like an instinctive decision than a very conscious one. I think that came very early on when we had only the first couple of pages of the script. Sam read me out loud on the phone and we were talking about it. We came up with the idea that it might work in black and white or actually black and white with a certain kind of abstraction to it.

The Double-X stock was something that we were prepping before we shot Malcolm &Marie or before we came up with the idea of Malcolm and Marie. We were prepping for the HBO show, Euphoria, and that was shut down due to the pandemic, but we were already through the camera tests.

There is a black and white sequence in that show, and we were testing out a couple of ways to shoot black and white both digitally and on film. We tested a couple of film stocks and Double-X was one of those. I knew the stock from way back in film school, where I used to shoot on it. I shot a couple of commercials on the side, but I think only on 16 millimeter. I thought maybe we should try it because no one really shoots Double-X anymore or very rare. I think The Lighthouse was shot on it recently, but I don’t think that I can name another big movie from the last five years. We tried it, and we just couldn’t achieve the same kind of look with anything else. We just love how it looks, the high contrast of it and the grain structure so we ended up shooting on it.

BTL: What sort of camera did you use?

Rév: It was the Arri LD. I’m from Europe, from Budapest, so I’m pretty familiar with Arri products and cameras. That’s what I grew up on — shooting on Arri cameras. We went with this camera, the economics of it, just the way you can shoot handheld with it—it’s really something I admire. 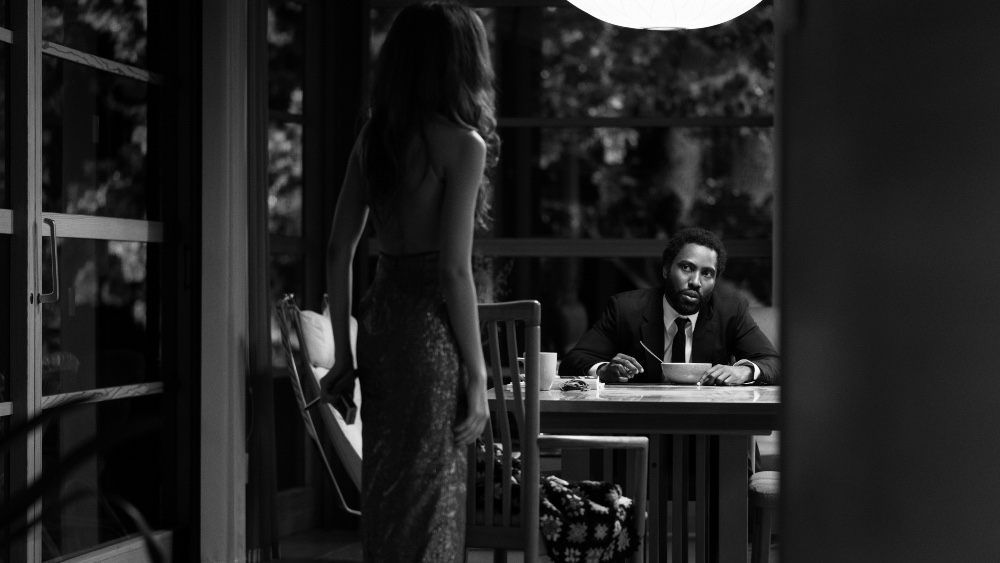 BTL: In terms of the lighting, what films did you look to for inspiration?

Rév: This was a very quick project that came together in a couple of weeks, so we were not looking at stuff the way we would look at stuff for ordinary projects that we are involved in. We talked about a couple of movies, but we didn’t really have the time to sit down and watch movies together. Obviously, we talked about Who’s Afraid of Virginia Woolf?, because that’s the movie you can’t really not talk about when you’re doing a two-hander in the house. I think I brought up to the movies La Notte from Antonioni. Sam really loves the movie The Servant. I think we were referencing camera movement from Bunny Lake is Missing, the Otto Preminger movie. Those are the examples that come to my mind.

BTL: The living room features large glass windows and the film takes place at night. Can you talk about the challenges that come with prepping those scenes?

Rév: We were always looking for this open structure modern building with glass walls. Since we are in this place for the whole movie, I thought it’s great to have a certain kind of view to make it an interior or exterior location so you’re not just looking at plain walls or furniture. You can actually see a landscape behind them. We were consciously looking for something that’s an open structured building. The Double-X is 250i so it’s not so sensitive stock. We needed double the amount of light as we would need if we were shooting on the color-coded stock division three. I think more amount of light as if we were shooting on digital so that was definitely a challenge with a limited crew. But it was a beautiful challenge because it also made us think differently, made us light differently, and made us shoot totally differently just because we had to do to light it in a very old school very, very classic way just to be able to achieve the desired exposure.

BTL: What was the most challenging part of shooting a film during a pandemic?

Rév: Those are more logistical and production kind of challenges. The biggest challenge we were facing is the limited crew, but that was an advantage in some ways as well, because it was a very familiar vibe on set. I think that helped a lot for the actors. Not just the actors, actually for us, it was a great mood on the set – it was just a great atmosphere. A limited crew slows you down a little bit. We didn’t have a lot of positions. We didn’t have a script supervisor or a first AD. Those things can make things a little more complicated at times, but at the same time, for example, we got to rehearse and talk about the script for two weeks while being in quarantine, which is time you’d never get on an ordinary production.

BTL: You’ve studied under Oscar-winning cinematographer Vilmos Zsigmond. What was the most important lesson you learned from him?

Rév: That’s not totally true that I studied under Vilmos, because he came in sometimes. He was a very busy cinematographer until the last days. He sometimes came in and gave us master classes, so yes, I was studying under him but he’s not like my mentor or something. The biggest lesson is maybe—I don’t know. He had a certain kind of patience towards everything, and that was very nice to see and also a certain kind of charm or humor that I think is very necessary to survive in this industry.

It’s been a fairly hectic and crazy week with the 72nd Creative Arts Emmy Awards taking place over the past four nights — you can read Below the Line’s full coverage here. There have been many big winners already despite the fully-televised virtual Emmy Awards not taking place until Sunday night.  Tragically, California may have bigger concerns with the horrific wildfires that have struck the entire state and nearby Oregon. Here […]

The Accidental Turitz: When It Comes to Peak TV, Too Much of a Good Thing Is Never Bad, Until It Is

May 18, 2022 Neil Turitz Accidental Turitz, Columns, Featured, Industry Sector, Television Comments Off on The Accidental Turitz: When It Comes to Peak TV, Too Much of a Good Thing Is Never Bad, Until It Is

I spend a lot of time in front of screens these days, and not just the one on which I write this weekly column. There is the external monitor hooked to the laptop, my phone, my TV, my iPad, and the movie theaters where I catch as many flicks as possible, perhaps to make up for the long stretch during the pandemic when that wasn’t possible. I mean, part of it […]

June 11, 2021 Danielle Solzman Camera, Featured, Film, Interviews Comments Off on In the Heights Cinematographer Alice Brooks Fulfills Her Dream to Film the Musical

Cinematographer Alice Brooks has wanted to shoot an In the Heights adaptation for years, and her opportunity finally came when film school classmate, Jon M. Chu, was signed on to direct the movie. In the following interview with Below the Line, Brooks broke down some of the challenges that came with shooting the film, including the “96,000” set piece featuring over 500 people throughout the two pools located at the […]