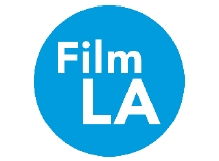 FilmLA, a non-profit organization and the official film office of the city and county of Los Angeles that works to streamline and enhance on-location filmmaking process for communities and content creators, has reported the year 2018 as the second strongest year for on-location filming in Greater Los Angeles. According to the report released on January 16, 2019, L.A. rose 5.0 percent in the fourth quarter of 2018, a strong finish of a year in which local film production came close to record highs. 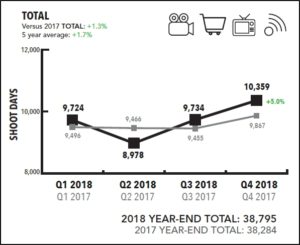 “2018 concluded a third consecutive year of record-level film and telecision production for greater Los Angeles, due in no small part to the California Film & TV Tax Credit program,” said FilmLA President, Paul Audley. “The return of jobs and businesses in the film industry is great news for our region and we look forward to a great 2019.”

Incentivized projects brought to Los Angeles by the California Film & Television Tax Credit Program contributed 11.4 percent, or 146 of the 1,078 SD in the Feature category for the quarter. Incentivized Features filming in Los Angeles during the fourth quarter included Birdbox, Once Upon a Time in Hollywood and Rim of the World.  The Features category finished the year up 12.2 percent, to 4,377 SD.

On-location Commercial production continued its upward rise in the fourth quarter, increasing 5.5 percent (to 1,404 SD). The Commercials category finished the year 8.7 percent ahead of 2017, with 6,033 SD in total.

If you are interested in learning more about the percent rates, or which Feature Films or TV shows were apart of L.A.’s rise in on-location filming for this past year, please visit www.filmla.com.

The Paley Center for Media, FX Networks, and 20th Century Fox Television have announced that they will host an FYC (for your consideration) special event and exclusive preview with American Horror Story cast members Evan Peters, Adina Porter, costume designer Lou Eyrich, and executive producer Alexis Martin Woodall, on Friday, June 2, to celebrate the launch of the American Horror Story: The Style of Scare exhibit. The evening will reportedly include a […]

Sight, Sound & Story: Live Presents The Role of the VFX Supervisor in Film on Aug. 31

Zylight, a manufacturer and distributor of LED lighting, will showcase a variety of professional LED lighting instruments for broadcast, film, and stage production at the NAB Show New York, which runs Nov. 9-10 at the Javits Convention Center. Co-exhibiting with distribution partner USHIO in Booth 325, Zylight will demonstrate its own lights as well as options from Aladdin and LDDE, which the company distributes exclusively throughout North and South America. “We’re […]