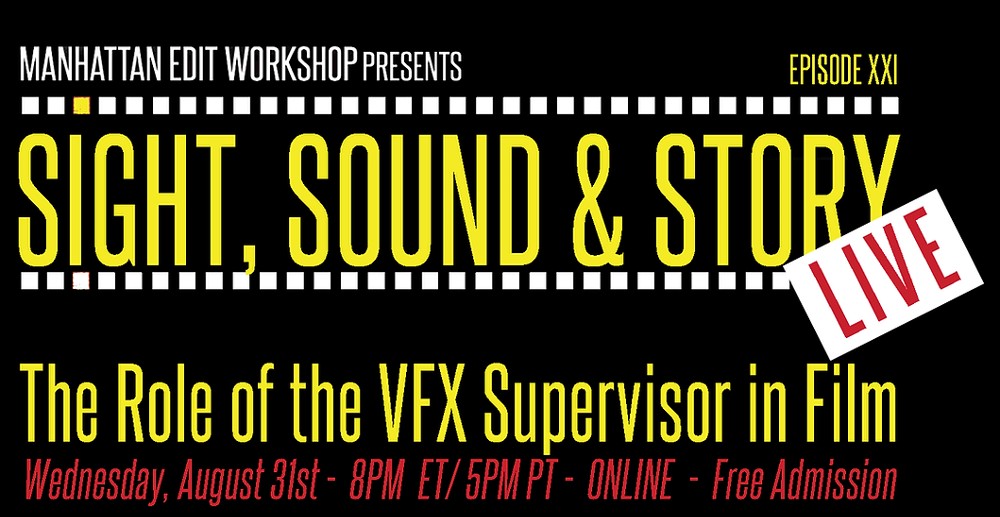 Inside Episode XXI: The use of visual effects in film has become an essential part of production. Join us for this insightful conversation with BAFTA and Critics Choice Award nominated VFX Supervisor, Jake Morrison and VES and SLFCA nominated Director & VFX supervisor, Mark Russell.

Jake and Mark will discuss the indispensable contributions that VFX play in films such as “Thor: Ragnarok” and “In the Heights.” They will also explore the unique relationship between the VFX Supervisor and the Director as well as give invaluable insights to anyone interested in pursuing a career in visual effects. The conversation will be guided by moderator Ross Shain, an Academy Award-winning and Emmy Award-winning visual effects veteran and Chief Product Officer from Boris FX.

This event wouldn’t be possible without our Master Storyteller Sponsors: OWC, AJA Video Systems, American Cinema Editors, & EditFest Global; as well as our Technology Sponsors: ZEISS, and Filmmaker U. We are also grateful for the continued support of our partners ProductionHUB, Digital Cinema Society, Mallorca Film Festival, LAPPG, NYWIFT, Film Fatales, LUMOS PR, and The D-Word.

Prior to this, Morrison supervised Ant-Man, directed by Peyton Reed, earning a BAFTA nomination for Special Visual Effects.

As overall VFX Supervisor on Alan Taylor’s Thor: The Dark World, he received a Saturn Award nomination from the Academy of Science Fiction, Fantasy and Horror Films. He began his tenure with Marvel Studios over ten years ago as Second Unit Supervisor on Joss Whedon’s The Avengers.

Morrison has been blending photography and computer graphics for over twenty-five years. Pursuing an early interest in creating real-time visuals to be performed alongside live music, Morrison taught himself a graphical programming language and learned video-sampling techniques. Since then he has pursued a career as a VFX / CG Supervisor as well as a Lead Compositor on many tent-pole films including Peter Jackson’s Oscar winning The Lord of the Rings: The Two Towers” and Zack Snyder’s 300, as well as numerous commercial and television credits.

Other motion picture credits (in assorted VFX roles) include Mission Impossible II, Sam Raimi’s Spider-Man, a trio of projects for the Wachowski siblings (Speed Racer, The Matrix Reloaded, and The Matrix Revolutions), Charlie’s Angels: Full Throttle, and Harry Potter and the Sorcerer’s Stone.

For the last 20 years, Mark Russell has supervised and managed the visual effects in both studio and independent film projects with a broad range of commercial and artistic appeal. Mark began his career in film production in Los Angeles, working on groundbreaking films such as Saving Private Ryan, Minority Report, and Hellboy. Since moving to Brooklyn in 2004, he has been advocating for the NY film and television community. He was the visual effects supervisor on J. C. Chandor’s A Most Violent Year and Triple Frontier, The Promise with director Terry George, and visual effects producer on Martin Scorsese’s The Wolf of Wall Street. In addition to studio films like In the Heights, The Adjustment Bureau, and Tower Heist, Mark has a soft spot for less commercial fare like The Sleep Dealer, Please Give, Synecdoche, NY, and The Europa Report.

Mark is currently in pre-production on Megalopolis with Francis Ford Coppola, which is scheduled to begin shooting in the fall.

Ross Shain is a visual effects artist, software product designer, and the Chief Product Officer of Boris FX. Ross has been honored numerous times for his technical contributions to the film and television industry for Mocha planar tracking software. In 2013, he received an Academy of Motion Pictures science & technology award and in 2019 a Television Academy Engineering Emmy.

You can watch past “Sight, Sound and Story: Live” installments at the official site.

In the ‘90s, Jonathan Hensleigh was one of Hollywood’s go-to action screenwriters with the likes of Armageddon, Die Hard with a Vengeance, and Jumanji on his resumé. In 2004, he took on directing with the Lionsgate film, The Punisher, which was followed in 2011 with the indie crime thriller, Kill the Irishman. Hensleigh’s latest film, The Ice Road, which debuts on Netflix this Friday, is the kind of big-screen action […]

The New England Section of the Society of Motion Picture and Television Engineers (SMPTE), a leader in motion-imaging standards and education for the communications, media, entertainment, and technology industries, will offer a free day-long “New Technologies Boot Camp” with the goal of fostering a better understanding of working with high resolution (UHD, 4K, and beyond), high-dynamic-range (HDR) imaging, and higher frame rates (HFR); maintaining resolution independence on screens of every size; […]

Why another movie based on Roald Dahl’s The Witches — this one directed by Oscar winner Robert Zemeckis — might be of interest to crafts and crew would seem obvious, although it’s been so long since I’ve personally seen the 1990 version directed by Nicholas Roeg I wouldn’t even know where to begin if asked to compare the two. Narrated by Chris Rock, we’re introduced to a young boy (Jahzir […]