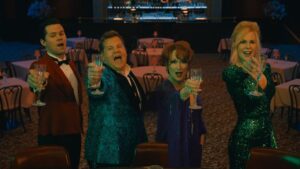 With the film being a musical, the performances drive and enhance the songs and the story. Megregian credited, “So much of this is all music driven. The music and the soundtrack go to Executive Music Producer Adam Anders (American Horror Story), Scoring Mixer Nick Baxter (La La Land), and Music Supervisor Amanda Krieg Thomas (Pose). They are the unsung heroes. The songs were from a Broadway play, so there was an order. I believe there were a couple songs that needed to be cut, but not many. The typical number of songs in a musical is around 10 or 12. This has one of the highest number of songs in a musical film running at 18. The emotion is in the songs and the performances. Everyone who performed in that; Meryl Streep, Nicole Kidman, and Jo Ellen Pellman and Ariana DeBose are just beautiful.”

The most complicated scenes were the ones with the big numbers and the over the top songs. “There was a fine line of grounding things in reality as big and over the top that some of the songs were; trying to find that balance of Foley in the real world, but also the larger-than-life sequences. In the opening first music number of the Broadway Premiere, “Changing Lives”; we’re going back and forth with how real we play it, how big is the music, and the music’s driving the whole thing and the performances. For the “Love Thy Neighbor” inside the mall; we got the fountains, the tambourines, all this stuff that wasn’t necessarily part of the soundtrack, but helped ground things a little bit. As big as the music number is of breaking out the song in the middle of a shopping mall. The “Tonight Belongs to You” goes from when Emma is getting ready to go to the prom, Barry going to the mall, and the mean girls getting ready and then going off to their prom. That whole sequence was big because we had to keep the energy alive with backgrounds and group, but the song just drives so much of it,” the supervising sound editor described.

A certain balance must be in place between the pre-recorded songs and the production sound. The sound editor elaborated, “We had two weeks for dialogue and music and two weeks for effects, backgrounds, and Foley. Some of the final mixes of the songs, we didn’t even have during pre-dubs, we were getting once we started finalizing. The way we were working is we would come together with the dialogue and music with Re-Recording Mixers Mark Paterson (Les Miserables) and David Giammarco (Ford v Ferrari), the effects, and Foley backgrounds. We get stuff put together with the two of them and then we would bring in Adam Anders, Nick Baxter, and the Editors Peggy Tachdjian and Danielle Wang to come in and shape. The first pass was really just having Adam and Nick there to make sure that their mixes translates and how things are playing. We would then do another pass with Danielle and Peggy to do the fine nuanced stuff, once the music was shaped. Finally, we would have Producer Alexis Martin Woodall and Ryan Murphy after that.

We went through a couple different rounds, but every reel took that shape and direction. It was just a matter of what do we want to feature, what do we want to pull back on, what should be driving in this moment. We didn’t do a ton ADR in the film; most of it was small efforts, breaths, and reactions from the actors. There were a couple things we needed to do in the music numbers when there was playback, but for the most part, the production is there. Even some of the songs went from the produced numbers back into production.”

Sound design augments another dimension within the musical scenes in the film. Megregian illuminated, “Most of the time, the picture editors would ask for certain things and we would send it to them. So much was shaped from Danielle, Peggy, and their Assistant Editors Jordan Bracewell and Larissa James. Ryan and his team map things out so well on their temp mix from their Avid, they spend a lot of time working on sound. We had basic shape for a lot of this stuff. The re-recording mixer David Giammarco is also my co-supervising sound editor and handled more of the sound effects and design with himself and Sound Effects Editor and Sound Designer John Snider (Rached). We would take what they had and elaborate on top of it. The supervising Foley editor and Foley artists covered everything and did a beautiful job trying to ground things. There were times that some of the Foley was too much that we had to pull back, other times we needed that to stay in that moment. All the music numbers were covered from head to tail, the background dancers, and then it was just a matter of finding that balance.”

The balance between sound design and sound mixing was the key. “During the mix, we were constantly trying to find the balance of what they were happy with, used to, help support, and augment or change. A lot of that was happening on the mix stage. The mix process gave us the opportunity to have that time to play around with Peggy, Danielle, Alexis, and Ryan. Sometimes things were just too big, they were too dense. We needed to start bringing out what are the things we really need to focus on. It is a musical, the music tells the story, and it’s so important that we didn’t obliterate that. Sometimes they can be a little easy, we see it and hear it, but that’s not necessarily what drives the story or help move things along,” Megregian expressed.

Ryan Murphy’s Netflix film adaptation of The Prom features the hit original songs from the Broadway musical play that incorporate new sound design elements. The final mix was superbly balanced between the production sound to the musical soundtrack and the added sound effects and Foley from the sound team in collaboration with supervising sound editor Gary Megregian.

“This is a film people can watch with their families, it’s so important, especially now with all the turmoil that’s been going on in the world in this country today to have such a positive message put out was really important.”

You can hear the complete soundtrack from The Prom on Spotify, and watch it on Netflix.

All photos courtesy of Netflix, except where noted.

While we anxiously await the answer to whether 60,000 IATSE workers will be on strike starting Monday — did you have a chance to look over IATSE’s FAQ providing information and answering questions about said strike? — we have some other industry and production news to share for those interested in what else is going on in Hollywood and across the globe. By the way, did you see IATSE International President Matthew Loeb on CBS Mornings this […]

Actor and director Isaiah Mustafa is returning to host the Location Managers Guild International (LMGI) 8th Annual LMGI Awards on Saturday, October 23, at 2:00 p.m. PT (pre-show at 1:00 p.m. PT) during a virtual ceremony (#LMGIawards), as announced by LMGI President John Rakich. The awards celebration, themed “Celebrate the Where,” will be free to stream, but registration is required at: bit.ly/2XRNQB2 A man of many talents, Isaiah Mustafa is a former NFL football wide receiver. After […]

Thinkbox Software announced the availability of Deadline 8, software that provides the foundation for organizations to easily manage any combination of local and cloud-based resources, ensuring jobs run efficiently. Deadline 8 introduces on-demand, per-minute licensing for Deadline, Thinkbox’s Krakatoa and Sequoia, and third-party applications including The Foundry‘s NUKE and KATANA, and Chaos Group‘s V-Ray, with more to be added. On-demand licensing can be purchased via the Thinkbox’s e-commerce portal 24/7, with minutes consumed only while the Slave application is rendering. […]