What does it mean to be “Italian”? Like for so many subjective questions, the truth may be in the eye of the beholder. Italians of different regions would likely answer differently as would, no doubt, non-Italians. All thoughtful perspectives could be compelling and even intriguing.

But in Ridley Scott’s upcoming film, House of Gucci, the answer is hackneyed, clownish, and, therefore, unconvincing. The film, about the intra-family squabbles that led to the literal and figurative demise of the Gucci family from the 1970s to the 1990s, is, in essence—a clichéd, American perspective of what it means to be a sophisticated, fashion-focused Italian. That cartoonish view so pervades an otherwise well-made film that it almost entirely ruins it, were it not for one of the young decade’s most stunning performance, given by none other than Stefani Germanotta a/k/a Lady Gaga herself.

House of Gucci bills itself as a story about “betrayal, decadence, revenge, and murder.” It is a mostly boring, wannabe soap opera. After a foreshadowing scene overlaid with Gaga’s voice as Patrizia Reggiani, the movie opens with a young Ms. Reggiani strolling along a dust-filled truck parking lot somewhere in the outskirts of Milan in the early 1970s. It speaks to Mr. Scott’s undeniable talent as a director that he knows well enough to both start and end the movie with Gaga, its undeniable shining star. More on that later.

After a few scenes that show Reggiani’s lower-middle class Italian background, Reggiani finds herself at a party next to the young heir of an haute couture fortune, Maurizio Gucci (Adam Driver). Maurizio is not one for business, and instead, pines to be a lawyer. But the more cunning Reggiani sees Lire signs, or perhaps expensive wallets gold-plated with that signature double “G” signature logo. Reggiani’s ambitions are powerfully conveyed through Gaga’s wide, determined, almost diabolic, look, which is convincing from the get-go.

Maurizio and Patrizia fall in love and eventually wed, though they have to contend with simultaneous support and distrust from Maurizio’s family almost from the beginning. Hawks circling the young couple include Maurizio’s father Rodolfo (a superbly made-up Jeremy Irons), his eccentric uncle Aldo (Al Pacino), and his flamboyant and even ridiculous cousin, Paolo (Jared Leto, underneath a mountain of prosthetics). Eventually, the vultures also include Camille Cottin as Italian designer Paola Franchi, who takes an interest in the strapping Maurizio. At various points, many of these personages support and oppose Patrizia’s designs, though most eventually end up the target of her scheming. The only character who stays fiercely loyal to Patrizia throughout lives well outside the House of Gucci is her soothsayer, Madame Pina, played by Salma Hayek.

Nothing in House of Gucci is left to chance. Certainly not the film’s most important and impressive below-the-line achievement, Janty Yates’ costumes, in one of her best renderings since she won an Oscar for dressing up the Romans in Scott’s Gladiator. It may seem obvious or straightforward to dress artists in a film about fashion, but the film’s subject matter sets up expectations, making Yates’ job that much harder. Fundamentally, finding the right Gucci-inspired clothes to dress this eccentric mélange of characters and artists is impossible. Imagine having to dress Lady Gaga, known for her bold costume selections and a uniquely curvy figure. And yet, everything Patrizia wears standouts, including most notably a magnificent Gucci blouse and brown leather skirt, which she wears during a sporting event at which she is stunningly served with divorce papers. Yates also knocks it out of the park with the various three-piece suits and accessories she sprinkles over mostly Irons, Pacino, and Driver, and she clearly had a good time coming up with the ‘90s polyester tracksuits for Leto’s jester-like character. In a word, the movie’s costumes are outstanding.

Given all of this, it is surprising—not to mention disappointing—that House of Gucci ends up, at best, a mediocre film. If one had to pinpoint a single reason, you could use one word (“accents”) because these actors, talented as they are, do not sound Italian (except for Leto). The decision to nevertheless imbue them with some sort of foreign clip creates a horrific aural distraction that early on becomes insufferable. Some sound Spanish, others just seem to have a lisp.

But one could dig deeper. One of House of Gucci’s earliest sins is that the screenplay (by Becky Johnston and Roberto Bentivegna) cannot make up its mind—does Patrizia love Maurizio, or is it all self-interest? They never say, and you’ll never know, because the filmmakers have no interest in any character depth, only to get you into the next, supposedly dramatic montage. Fundamentally, the story does not know how to actually explain intrigue and has no interest and nothing more than simpleton knowledge of the Italian culture it wishes to convey.

In fact, despite the bulgy 2.5 hours in runtime, House of Gucci seems to have little interest in any story at all. There is little about how the family became this rich and famous in the first place, relevant to, at a minimum, creating a backdrop for all the intrigue that existed among the Guccis well before Patrizia hip-swayed her way onto the scene. And there is devastatingly little about how exactly the relationship between Patrizia and Maurizio fell apart, even though the couple is at the core of the story. The thesis is that Patrizia’s intrigues against Maurizio’s family drove them apart, but the film never really explains how or why, despite all the intrigue it does focus on. In the end, you are left with two critical questions — “Did she really love him?” and “Why did he stop?” — not simply unanswered but criminally unexplored. 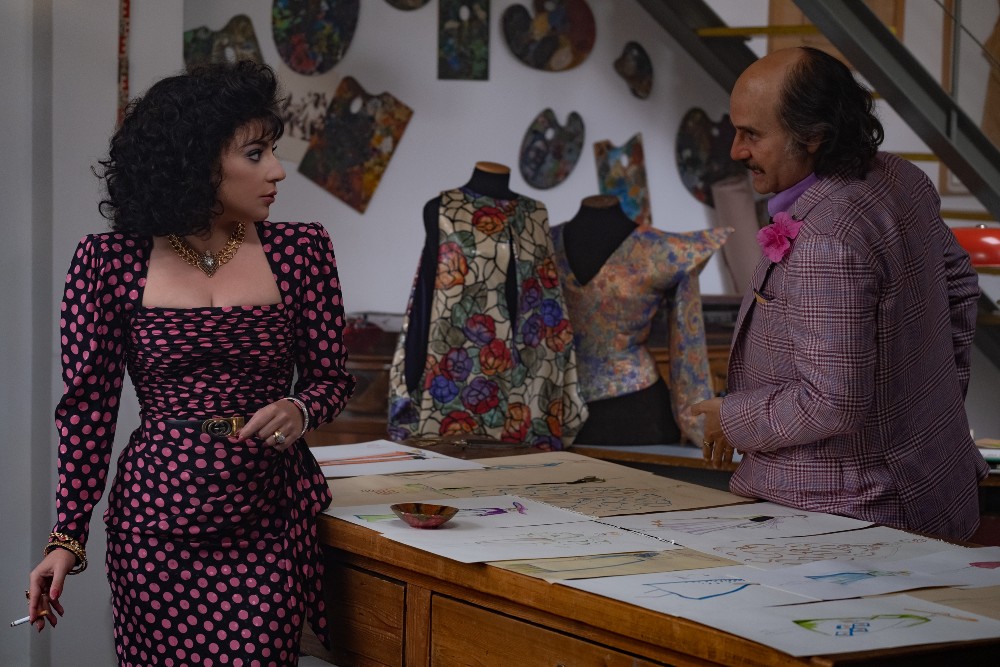 The script is built around the misguided idea that fantastic costumes, bulky set designs, and swirling cigarette smoke can cover over what is missing in a story. The only thing that the weight of the heavy craft and the bulky accents achieves is bringing down the entire artifice, constructed on the legs of a wobbly script.

The only one who manages to escape the collapse is the film’s main character, played by Gaga, who ends up saving the movie from itself. Without question, this is the best performance of Gaga’s young acting career. She gesticulates, she cries, she points her finger in threats, she opens her eyes, and she moves her body. Gaga is harkening back to the way women acted in Fellini films and, because of Fellini’s influence, more generally in the late 1950s and 1960s.  In other words, Gaga’s entire performance is a silent but powerful homage to Italian cinema—one of the pillars of that country’s rich culture if there ever was one. Gaga acts like she means every word she is saying, which makes her stand out from those around her, much like her character Patrizia does. She is tragically good.

When the credits finally roll, House of Gucci will stick in your head for a long time. The beautiful set-up and the magnificent performance at its core are that memorable. And all the time you think about it, you will not shake the feeling that you just watched an otherwise not very good film.

Universal Pictures will release House of Gucci in North American theaters on November 24, 2021.

In Foundation, streaming on Apple TV+, humanity is a thing of the past, ushering in a band of the banished who  mount a colossal undertaking to save and rebuild civilization amid a falling Galactic Empire. Even if you’re not a sci-fi aficionado or galactic geek for that matter, you can’t help but be impressed with the out-of-this-world creations from Costume Designer Eimer Ní Mhaoldomhnaigh.  A known and revered designer in […]

Umberto “Tino” Liberatore has become the new Managing Director at leading professional audio accessory manufacturer, K-Tek. After working with K-Tek as International Sales Manager for 9 years, Tino has been influential in ushering in a new era of the latest on set and location audio gear to facilitate boom operators and sound mixers. Liberatore is known for supporting the sound community internationally and domestically by working with high-profile customers and […]

Derby has announced the appointment of Rebecca Niles as Executive Producer. Her background includes a previous two-year stint with Derby as head of production plus prior work for brands including WeWork, ESPN, Nike, Bloomberg Philanthropies, Aruba Tourism Board and British Airways. She also produced a variety of content for Complex Networks such as Not Afraid: The Shady Records Story with Eminem, 50 Cent and Dr. Dre, plus hit shows Sneaker […]