One of the 2016’s most pleasant and unexpected surprised was Illumination Studios’ Sing, the beautifully animated cartoon about a gaggle of wannabe singer animals overcoming their various impediments to become amateur stage singers. The success of the first led to the nearly assured (and highly-desired) existence of the next, but success is a fleeting mistress in Hollywood and even well-rendered sequels to cartoons are not immune from the problem. Sing 2, for all its tender moments and gangbusters finale, fundamentally fails to connect emotionally like the original did with audiences, who are unlikely to give a standing ovation asking for another turn this time around.

When Sing 2 opens, we pick up exactly where writer-director Garth Jennings (who also penned and helmed the original) left us. Mr. Buster Moon (Matthew McConaughey), the optimistic, relentless koala who owns a theater in what appears to be a replica of San Francisco, is now running a successful musical based on Alice in Wonderland. His friends and talent, too, are where we last saw them, including Rosita (Reese Witherspoon), the pig mother of 25 piglets and his lead singer, and Johnny (Taron Egerton), the gorilla whose dad got in trouble with the law, and Meena (Tori Kelly) the shy elephant with a delicate voice. Ash (Scarlett Johansson), the teenage porcupine who loves alt-rock songs, is not a part of the Lewis Carroll-based production, but she, too, will soon join the proceedings. The issue is that while Mr. Moon’s little show is successful, it is just that… little. His ambitions are next level now. 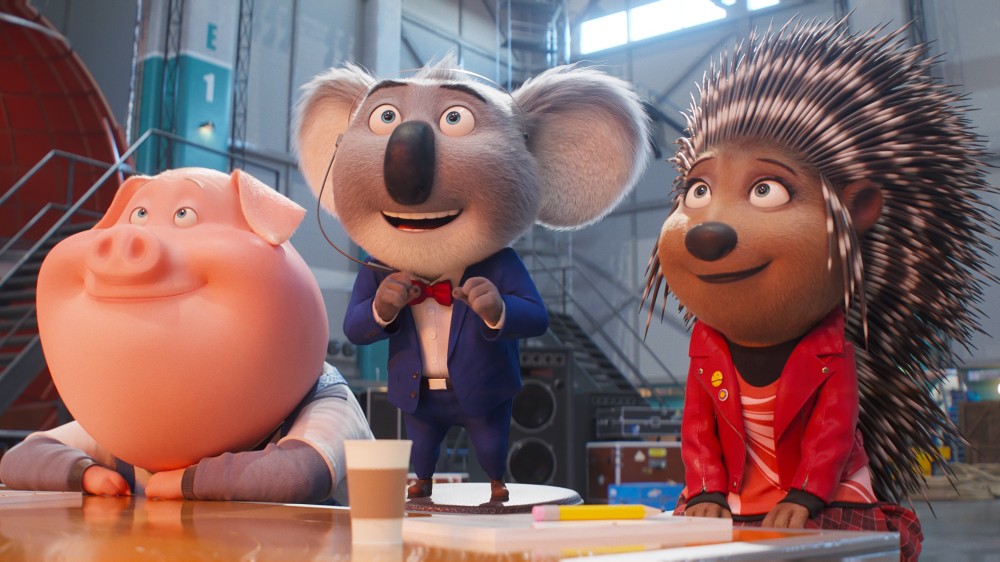 Moon convinces his unpersuaded gang to accompany him and his faithful, elderly lizard assistant Miss Crawly (voiced by Jennings himself) to fictional Redshore City, a strange futuristic combination of mostly Vegas with some seaside paradise, where they can meet the powerful showbiz producer Jimmy Crystal (Bobby Canavale) in hopes of having a bigger audience. Eventually, Bono himself joins the proceedings in the form of the aging and cowardly lion Clay Calloway, who refuses to return to the stage. Moon must put on the show of his life for the demanding Calloway—including dealing with his capricious, spoiled daughter Porsha (Halsey)—or else he may become Koala rug skin, Sopranos-style.

But while Sing 2 is certainly visually pleasant, hilarious at times, and very impressive when Moon’s latest show finally, comes on, the film simply lacks the emotional depth that made the original relatable and its characters those you could root for. The musical numbers are as grand as ever—though why as many as three U2 songs are used is not clear—but even the most clever and beautiful film has to add something to its formula if it’s going to equal, let alone match, the magic of the original.

In the first Sing, each character had to overcome a particularly compelling obstacle to get him or her to the stage. Rosita the Pig had too many kids and not enough time; Johnny the Ape has the quintessential dreams of being an artist was not supported by his father; Meena the Elephant had stage fright; and Ash the Porcupine let her heart get in the way of her talent. And there was of course Moon himself, whose relentless optimism sometimes left him unable to see real problems as they arose. Each character was wonderfully different from the next, and they all had one thing in common with each other and the audience: the love for pop songs and music videos. Each of them was relatable in some way, and each of them gave you something to root for, making Sing one of the most delightful cartoons from last decade.

Sing 2, with all these problems solved, finds little left to turn to. It turns out that Meena is still shy, but this time around guys — including one in the form of an elephant voiced by Pharrell Williams — though this does not really keep her from doing much signing at all. The one with stage fright is now Rosita, but we see little of this because we are still in rehearsals. Johnny does not seem to have any problems anymore, other than his choreography teacher is just mean, while Ash disappears almost entirely from the picture. Perhaps, the problem is that there are too many characters for a script to service—a common malaise of sequels based on successful, multi-story originals. Or perhaps the issue is that Jennings moves from emotional challenges to ones of intrigue, of good buys vs. bad guys. Under this theory, Mr. Crystal is the foil that constantly threatens Moon and his production. Even then, though, Sing 2 suffers, because Crystal is never portrayed as anything more than a cartoon, actually harmless villain, at least not until the very end when he becomes inexplicably and illogically super-bad and must be excised from the picture.

By the time Sing 2 gets to the third act, when Moon’s new show (about space explorers) gets on the stage, it is too little too late. Yes, the special effects here, led by CG Supervisor Richard Adenot¸ are wonderful, and the musical numbers are grandiose enough to make what sounds like a silly play by the little Koala into something vastly entertaining and visually satisfying. At that point, you may look longingly at the previous two hours, wishing that Jennings had perhaps dispensed with the formalities and cut directly to what we all came to see.

We came for the cute little animals performing our favorite pop rock stars under explosive fireworks and lights, not for the over-extended, lifeless rehearsal steps that they all took to get there. In offering mostly the latter and very little of the former, Sing 2 never quite reaches the high notes that made the original such a memorable film.

Sing 2 premiered at the AFI Film Fest and will be released by Universal Pictures on Wednesday, December 22, 2021.

Alkemy X has signed award-winning director and cinematographer Jonathan Yi for exclusive representation for advertising projects. A multi-talented filmmaker, Yi recently collaborated with Alkemy X on a series of spots for the Virginia Tourism Corporation and The Martin Agency. The latest addition to the agency’s iconic Virginia Is for Lovers campaign, the LoveShare spots debuted in the wake of the white supremacist rally in Charlottesville. In discussing his decision to […]

SIGGRAPH 2022: The Most Exciting New Tech Unveiled So Far

SIGGRAPH, the world’s premiere computer graphics showcase, begins its live, in-person event this week in Vancouver, where many leading scientists and tech creators will be sharing their latest work publicly for the very first time. Here’s a rundown of some of the most exciting new tech that has been introduced so far, from our perspective: Feature Film Quality Markerless Mocap Traditional motion capture processes normally require expensive mocap suits and […]

Christopher Nolan’s Dunkirk, which explores the origins of WWII, takes place mostly on beaches, boats and in the air. Nolan’s long-time colleague, the Oscar nominated Production Designer, Nathan Crowley was tapped to recreate this dark time in history. Crowley’s first collaboration with Nolan was on the crime thriller, Insomnia and his body of work includes Prestige, The Dark Knight and Interstellar. Crowley began his career as a set designer on […]