Canadian director Sarah Polley (Away With Her, Take This Waltz) has made her best film yet with Women Talking, the first feature she has directed in a decade. The movie had its world premiere at the Telluride Film Festival last week, and it’s based on Miriam Toews‘ 2018 novel, which follows eight Mennonite women as they debate whether to leave their religious colony after being repeatedly drugged and raped by its men. Polley has devoted her career to telling complicated stories about women, and she received the festival’s coveted Silver Medallion for her latest effort.

Women Talking was produced by Plan B duo Dede Gardner and Jeremy Klein as well as four-time Oscar winner Frances McDormand (who also has a supporting role), indicating that it’ll be a strong contender this awards season once it finishes the festival circuit. The film will certainly be hard to ignore thanks to Polley’s steady hand behind the camera, her stupendous cast, and its strong below-the-line values.

As the film opens, Ona (Rooney Mara) awakens from a dreamlike stasis in her bed, her inner legs bruised and bleeding. It is obvious she has been assaulted and yet she seems either unaware of this or unconcerned — as if it were a regular occurrence and just part of daily life. A voiceover by Mejal (newcomer Michelle McLeod) then explains (to an unborn child of unknown gender) that she will recount a story that predates them, a story about sexual abuse and the difficult decision of whether or not to confront it. See, after one recent attack, Ona’s sister, Salome (Claire Foy), dared to fight back. Her rapist is taken to a local prison but he will make bail in two days, so the men give her and the other women of the colony an ultimatum — a sentence, perhaps — to forgive the man before he returns, or face eternal damnation. 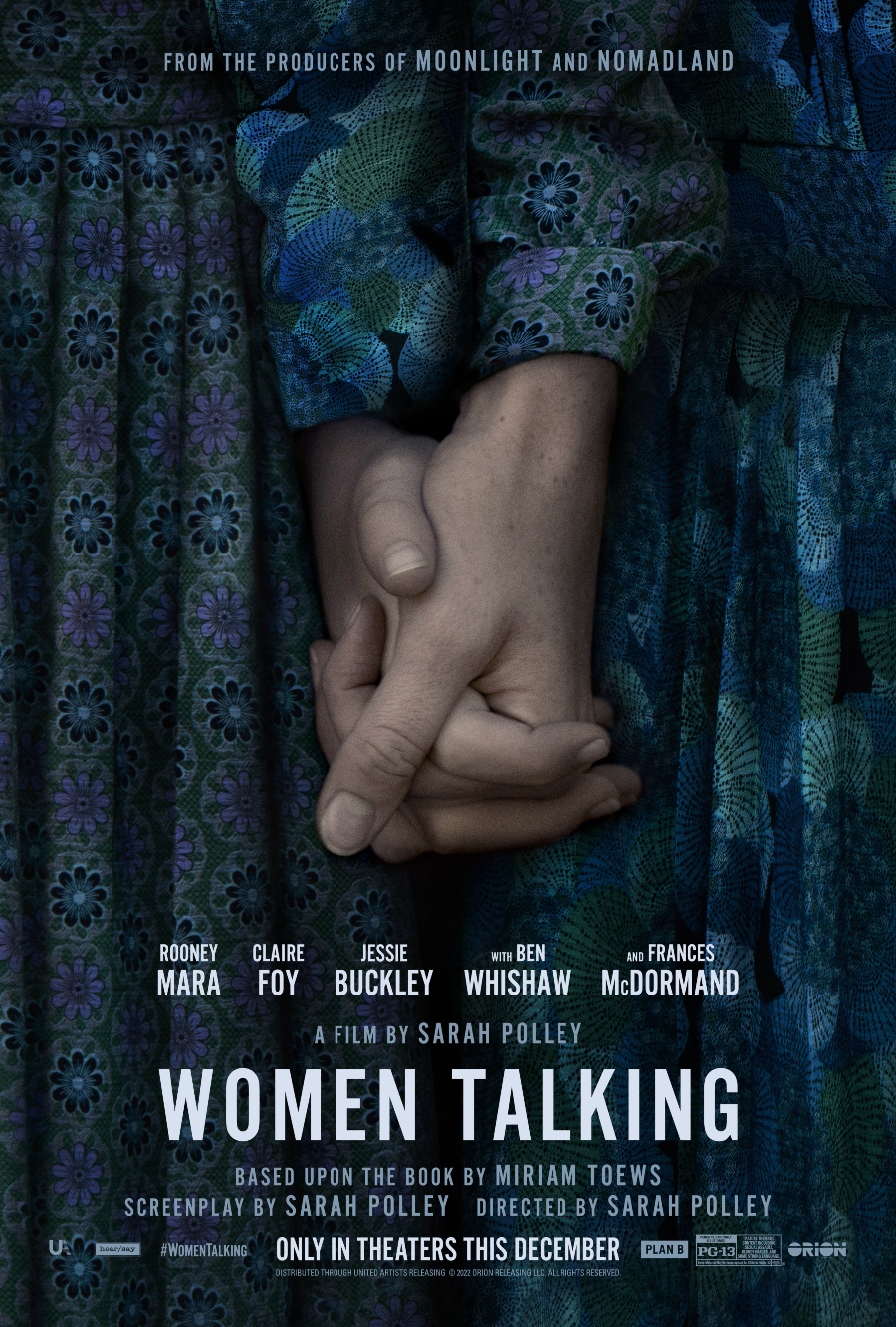 The women of the colony then “vote” (by marking “X”s below pictures drawn on parchment paper, as they cannot read or write) as to whether they should stay in the colony and do nothing, stay and fight the men, or simply leave. When there is a tie between two of the options, a smaller group of women including Ona, Salome, and Mejal, as well as Mariche (Jessie Buckley), Agatha (an exquisite Judith Ivey), and Scarface Janz (McDormand) gather atop a hayloft to debate and decide the future of the colony.

You will hear a lot about Hildur Guonadottir’s (Joker) spectacular score (including from me, below), but it is Luc Montpellier’s exquisite cinematography that grabs the most attention, as the entire film is set in a subtle, almost ethereal cyan tone — not quite black and white, but not fully in color, either. So much is conveyed by this visual trick alone that it could take an entire review to unpack it. The soft yet decisive tone is much like the women in the film — at times unobtrusive but always there, standing with conviction. The tones also convey Polley’s clear tenderness towards her characters, who have suffered horrendous, almost unimaginable crimes, and who she frames with strength and courage rather than sorrow or pity.

The cinematography also signals that these individuals are not fully living, as they are not entirely free or in control of their own destinies. There is a certain beauty to their lives but they also feel incomplete to some extent. Montpellier caps his stunning photography with gorgeous panoramic shots that make a mostly unimpressive Mennonite landscape somehow memorable, including as he dives beneath and above the fields that surround the farmhouses. Simply watching Women Talking without the audio track (how ironic) would be a delight all its own.

But you simply must hear this score, as Guonadottir veers in a very different direction from her last few pieces, including the trembling, tense Joker soundtrack that won her the Oscar. Here, she’s in perfect lockstep with Polley, offering much more peaceful, yet forlornly hollow tones that really kick the inherent emotion of the story into a higher gear. The score goes from serene to tense with the subtle transitions that define the Icelandic composer’s work, just as Polley and editor Roslyn Kalloo shift persistently from the small rays of hope of the present to the horrors of the past. I expect that Guonadottir, who also scored another fall festival darling — Todd Field‘s Tar starring Cate Blanchett — will be back in the awards conversation for one of those two films, if not both.

Amidst these heightened production values — which also include notably realistic work by Production Designer Peter Cosco and Costume Designer Quita Alfred — the question arises of what are these women talking about, anyway? Some struggle with marrying their deep religious convictions with the “fight” option, for example, which connotes violence, while others are unsure of how to reconcile the abandonment inherent in the “leave” option (nevermind the attendant eternal damnation) with their innate need and desire to protect their children from further harm? Where would they even go, being unable to read, write, or navigate? The lone male figure in the film, teacher August Epp (Ben Whishaw), takes the minutes of their debate and tries to teach them how to read a map, but cannot otherwise help answer these pressing questions.

Polley herself tackled the adaptation, and her screenplay is sharp and effective each time the group does get to talking, though it stumbles once or twice when the women take a break from doing so. As the drama unfolds, the film’s various protagonists become vehicles for different perspectives on sexual abuse and how much empathy one should have for an abuser.

Mara’s Ona is the quieter, more resigned one who is convinced she’s in love and thus, is willing to put up with some abuse in the name of holding on to that feeling. McDormand’s Janz represents another, more extreme perspective, as she’s been left embittered by years of abuse and the facial mark that augured her cruel nickname, so she has determined that if she had to suffer, others will have to endure it, too. In between are women of conflicting emotions and those who alternate between resignation and determination, as victims often do. This spectrum of emotions requires Polley’s stars to hit difficult notes of various degrees, and they all do so to perfection, rising to the powerful occasion. Buckley and Foy, in particular, steal the show, as they are the ones who are asked to oscillate between conviction (sometimes to fight, sometimes to leave) and waffling, giving them the opportunity to showcase a wide range of emotions, from fear to anger and ultimately, sadness. The two are excellent, though Judith Ivey also makes her quiet veteran presence felt throughout the discussions.

If Women Talking ever stumbles, it’s only in rare moments when Polley’s script veers away from the difficult subject matter at the heart of her story. Politically relevant additions, easy jokes that seem out of place, and other slight deviations from the gripping debate the women are enraptured in contribute to making the script feel forced and somewhat staged at times. Thankfully, these are just a few moments, and Polley impressively sticks the landing when she delivers the denouement of the debate, which prompted an outpouring of emotion inside Telluride’s Palm Theater.

Rape, freedom, violence, oppression, misogyny — these are difficult subjects that aren’t appropriate for dinner talk around the kitchen table, but certainly must be discussed at film festivals within the context of a piece of art. Under Polley’s careful, guiding hand, such previously taboo topics are made a bit more palatable for audiences, as the director infuses the story with so much beauty and coaxes convincing performances from her largely female cast. The end result is a film that effectively tackles challenging subject matter and somehow leaves the audience longing for more.

Women Talking premiered at the Telluride Film Festival on Sept. 2 and will be released in U.S. theaters on Dec. 2 by United Artists Releasing.

September 23, 2020 Edward Douglas Featured, Film Comments Off on Talking to Stuntwomen About Breaking Into and Staying in the Stunt Business

This week, a documentary called Stuntwomen: The Untold Hollywood Story is being made available for digital download. It’s a fascinating film that goes deep behind the scenes into the world of a frequently-neglected segment of an already underappreciated group so pivotal to the world of film and television: the stuntwomen. Over the past few years, action movies and shows featuring women leads have led to the need for a more […]

Nominations for the 68th Emmy Awards were announced today by the Television Academy in a ceremony hosted by Television Academy chairman and CEO Bruce Rosenblum along with Anthony Anderson from the ABC series black-ish and Lauren Graham from Parenthood and the upcoming Netflix revival, Gilmore Girls.   “Television dominates the entertainment conversation and is enjoying the most spectacular run in its history with breakthrough creativity, emerging platforms and dynamic new opportunities […]

Founded in 2015, Sydney-based studio New Holland Creative specializes in design and motion graphics for advertising, broadcast and feature films. Its talented team of design directors and animators boast an impressive history of award-winning design, visual effects and broadcast work. New Holland has recently added Hyundai and Foxtel to their rapidly growing list of clients. When New Holland began building its technology pipeline, one of the first pieces it put […]