Prepared by its research division, FilmLA has released a new report that offers an overview of the current production landscape for U.S. based television series and TV projects. The report also assesses some of the trends shaping series production across broadcast, cable and digital networks.

The impact that digital streaming services are having on television production continues to be substantial. 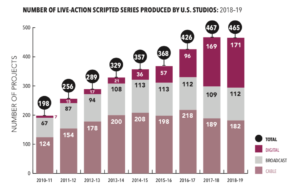 This category has experienced a rapid growth in television content for both new projects and live-action scripted series. The number of digitally distributed original series in production has increased 2,300 percent from the 2010-11 season. The number of new digital projects nearly doubled between the 2017-18 and 2018-19 development cycles, increasing approximately 85.3 percent in one year.

A total of 51 percent of new projects ordered went straight to series in the 2018-19 cycle compared to 36 percent in 2017-18, and 205 of the 465 tracked series were produced in California, yielding a 44 percent market share for the period. 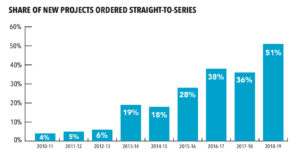 Hopefully, everyone’s recovered from Super Bowl weekend, but if you happened to miss all the commercials and the first look at a number of movies and television series, never fear, as “Over the Weekend” has your back. We’ll get to a bit of industry news first and then you can watch a bunch of them down below. On Friday, Oscar winner Jennifer Lawrence was injured on the Brockton, Massachusetts set of […]

In the ongoing absence of an industry-wide agreement with either the AMPTP covering filmed entertainment, or the AICP for commercial production, the Art Directors Guild (ADG) has released their set of key recommendations and protocols for adoption in the workplace (attached). These recommendations are intended to address the day to day experience of ADG members and are supplemental to the Industry-Wide White Paper, and the Safe Way Forward with respect […]

Earlier this week, the Hollywood unions came to terms with management i.e. the Alliance of Motion Picture & Television Producers (AMPTP) in terms of an agreement on proper COVID-19 protocols to allow productions to resume for the next seven months. Today, IATSE President Matthew Loeb made a statement on the IATSE website that the union representing the behind-the-scenes workers will take a “zero tolerance” policy to its members following the protocols. In the directive […]