“You try to make an honest movie,” said Sergio Pablos, director of Netflix’ first animated feature film Klaus, just after the film racked up seven Annie Awards—including Best Animated Film—at UCLA’s Royce Hall in the 47th such ceremony. “You pick a truth that you believe in.”

For Pablos, who also wrote the story and co-wrote the screenplay, Klaus, produced in Madrid, Spain, represented an opportunity to deliver a twist on a familiar tale. “I believe that kernel of kindness is contagious, which is another way to say Christmas spirit,” he said. “If you can capture that into a Christmas movie, in an honest, non-corny version of it, it could be a great Christmas movie. Then, you go on the way and make the best decision you can with what you’ve got.”

Notably, 22 separate nationalities worked on Klaus, with 15 languages spoken at the Madrid base. “I had incredible talent, some who had never worked on a feature film before,” Pablos revealed, “but they were so hungry and driven, it added up to something we could have never expected.” 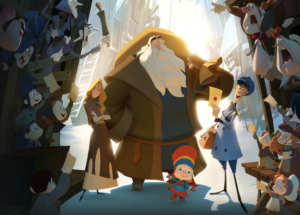 In Spain, Klaus’ crew of 300 in-house animators and technicians tried to communicate via some version of English, but pockets of French, Italian and German were also spoken at Pablos’ SPA Studios. Additionally, another 50-70 people worked remotely on the project for two-and-a-half years, from pre-production to delivery. “The time it took to get to a point where we could actually make it was longer: about six-seven years,” Pablos detailed. “Every film I tried to do was going to be my first film, and I fell 20-30 times trying to get there.”

Supervising animator Sergio Martins, from Lisbon, Portugal, was also awarded an Annie for Klaus, which, in total, won for best picture, directing, character animation, character design, production design, storyboarding, and editing. Martins was one of the first crew members hired for Klaus, and it consumed three years of his life, making his Annie win, a huge upset, even more special. “It was a good surprise,” said Martins. “The biggest challenge was managing a team of 20 animators that were very young but extremely talented. Almost none of them had done a feature film, including myself. So the biggest challenge was, how are we going to make this happen and learn something? But we did it!”

Considering that Netflix had never previously created an animated feature, combined with Klaus’ competition at the this year’s Annies being franchise entries from the likes of Walt Disney Animation Studios, Pixar, and DreamWorks Animation, its sweep of all categories in which it was nominated makes Klaus an unprecedented entry into the overall world of animation in cinema. 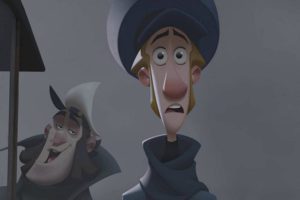 Understandably, Pablos reflected positively on the Netflix experience. “I know people assume it’s part of the company motto to say you have a lot of freedom, but it’s absolutely true,” he said. “They made us work harder in the beginning, pitching our movie up the ladder, convincing everyone this movie is worth making. They were judging the idea, they were judging me as a leader for that idea, [plus] the vision and the capacity for our company to actually deliver. Once we got there, they said, ‘Okay, go make the movie, and only call us if you need help,’ and, literally, it was that.”

Ultimately, Pablos conveyed that his creative latitude in making Klaus unexpectedly placed an extra layer of pressure on his team. “You can’t blame anyone else if it doesn’t turn out right,” he explained. “But at the same time, not having to deal with the politics of the studio—and being able to make changes on the fly—actually allowed us go through the same stages that any film goes through, make all the same huge mistakes, but be able to reconduct the film quickly. We didn’t get it right the first try—we made so many versions—but were able to go through them faster, and not have to take notes from everyone, and how to incorporate them. So, it was the most creatively liberating experience I’ve ever had in my career, and I’ve been out there.”

Happy Friday, and for some of you, Good Friday, as well! It was a pretty packed week, and the biggest news story may be the backlash to the Georgia government instituting voting laws that have come off as discriminatory with many in the entertainment industry making statements to the effect of boycotting bringing any productions to the state. Georgia, especially Atlanta, has been particularly busy with tons of work for […]

The SIGMA Corporation announced that it will enter into the cinema lens market with the release of its SIGMA cine lenses, designed specifically for cinematography. There is an increasing demand for higher resolution, and SIGMA’s new lineup of high-performance lenses is compatible with the latest, high-resolution digital cinema cameras. SIGMA has developed its own production system by establishing the required technology for mass production of high-performance lenses for ultra-mega-pixel shooting. The company […]

The newest production music from ALIBI features seven high-energy tracks that can be used for trailers, promos, ads, programming, sports or esports. The new albums – created by a diverse group of international composers and artists – feature tracks structured with the needs of editors in mind, as well as ALIBI’s signature touch of multiple stems, cutdowns and alt mixes. ALIBI’s new tracks include Classical EDM Remixes, Future House Volume […]