Graham Annable and Anthony Stacchi‘s film The Boxtrolls ends with a shot in which a long pull-out begins to reveal an animator at work around the foot-high puppets with which the film was shot. The fact that modern audiences may actually need this reminder of the almost absurd amount of effort that’s intrinsic to stop motion is an indication of how rare it is; not since Laika‘s previous film, the Oscar-nominated ParaNorman, has the technique won such widespread acclaim.

Neither co-director is new to animation, with Annable having served in the art department on Coraline and as a story artist on ParaNorman, among many other credits. Stacchi had worked as an effects animator on James and the Giant Peach and as an animator on Peter Chung‘s famous television series Aeon Flux, as well as co-directing Sony Pictures Animation‘s 2006 feature Open Season alongside Jill Culton and Roger Allers.

While it would be easy to assume that computer-generated shortcuts would be tempting to the modern stop-motion animator, “The basis of it is the stop motion,” affirmed Annable. “There are no CG versions of the heroes. They’re real puppets.”

Speaking from behind a table bearing several examples of those metal-armatured, silicone-skinned figures, Stacchi described the well-defined dividing line between traditional and modern techniques, with CG work strictly limited to effects that are impossible to convincingly achieve with traditional techniques. “We didn’t want to charm you out of the movie by showing too much of that stop-motion charm – using cotton to do smoke, for instance.” Occasionally, the filmmakers rendered CG elements without motion blur, to better match the slightly staccato appearance of stop motion. Nevertheless, the production is otherwise dedicated firmly to the old school, with the rigging department building intricate mechanisms to simulate effects such as rippling water, for which they used rotating glass sheets. The film’s stereo 3D was acquired live on set, with a motion control device allowing both eyes to be photographed with a single Canon 5D Mk III stills camera. 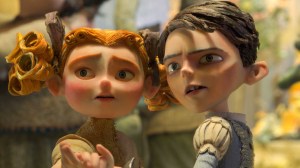 As a result, there was no alternative but to involve a crew of at least 27 animators for the 18-month production period, shooting on up to 55 stages at Laika’s Oregon base. More problematically, stop-motion specialists are rare. “We kind of lucked out,” said Annable. “There was no opposing stop-motion project in the works.”

Stacchi contrasted this with the situation on computer-generated productions, which have the flexibility to “throw 60 or 65 animators in to finish a film,” he said, which is an option not open to stop-motion producers. Thanks to the studio’s glowing reputation among those familiar with the technique, though, Annable “felt like we got the best of the best.”

The solution to this restricted labor pool was planning, with a complete plot of every frame in the film established prior to beginning animation. “We wanted it to feel like a big action adventure comedy,” Annable said. “We added a CG previs department to this for the first time.” As a result, practically every frame of the animators’ patient endeavor is on screen, give or take the 10-frame handles created at the beginning and end of every shot. Almost none of the animators’ work ended up on the cutting room floor, and nor, practically, could it. “The producer would kill us,” laughed Annable, when presented with the idea of wasting that much effort. Of the actual animation work, Stacchi felt that “you’re always prepping animators as if they’re actors. It’s a performance.” A sequence might take two weeks to animate, with “rehearsals on fours, twos, or sixes” – referring to low-frame-rate trials to establish overall motion – “but every day is opening night.” 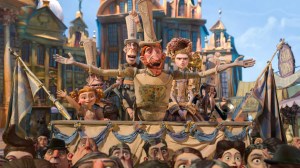 To achieve the characters’ expressive faces, The Boxtrolls used a rapid-prototyping technique wherein removable faces were 3D printed. The technique, which had been pioneered on ParaNorman, was able to produce up to 150 faces per day for leads Winnie and Eggs, but when faced with the features of the villain Snatcher, grotesquely distorted by a cheese allergy toward the end of the film, the production rate fell to 10-12 per day.

“Those shots had to be planned,” Stacchi explained. “As much as we pushed the RP [rapid-prototyping] department to do the sophisticated color, when we started boarding out Snatcher’s face swelling, they started sweating.” 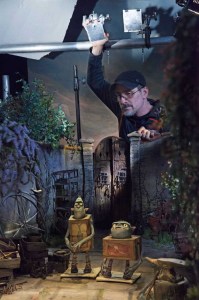 Stacchi and Annable are also keen to credit the head of costume, Deborah Cook, who searched out fabrics with an appropriate scale appearance, that would fold and wrinkle appropriately without giving away the scale of the characters. Cook used laser cutting techniques to create the characters’ tiny costumes so they would feel small enough. Despite this, heroine Winnie’s expressive dress consumed 37 scale yards of fabric.

The Boxtrolls is based on Here Be Monsters, the book by Alan Snow, who kept in touch with the filmmakers. Tensions between the writer and adaptors of that work were kept to a minimum. “Alan has a little history in stop motion,” said Stacchi. “Every now and again he’d dip in and say hi and see things. He has an enlightened view of what happens to your literature when it goes into the Hollywood machine. A year ago, we were in London recording the score and we had some sequences to show him. He watched the sequences quietly on the laptop, and said, ‘Wow, you thought my book was weird.’”

The directors acknowledge that the process of making their film wasn’t without its challenges.

“Most of the time it felt like we were standing back-to-back with our swords out,” Stacchi of the 18-month production process.

But the filmmakers are keen to emphasize that they were supported and benefited from Laika’s core group of people. CEO Travis Knight is a skilled animator himself, and is the man depicted in that end-credits shot.

“Travis has a vision of Laika as an independent company,” Annable said. “Because they’re not part of a huge conglomerate they can do stories that are different from everyone else. The culture of the studio pulls the movies together.”

With a Golden Globe nomination announced just the day before we met the directors, that studio culture seems to be pulling in the right direction.

Film Lab New York, the last motion picture film processing laboratory in New York City, will cease operations as of Dec. 19. The company, launched in 2011 as a joint venture between Technicolor-PostWorks New York and Deluxe New York, provided laboratory services to motion picture, television and commercial productions operating on the East Coast and around the world. […]

Quantel unveiled a new Pablo Rio working in realtime at 8K, 60P at Inter BEE 2014 in Tokyo this week. The new Pablo Rio 8K, which was was developed in collaboration with Japan’s national broadcaster, NHK, will ship next year. […]