“We really had fun,” said editor Dody Dorn about her collaboration with director David Ayer on Fury, the gritty, character-based story of a battle-hardened tank commander and his crew ordered on a deadly mission into the heart of Nazi Germany during the final months of World War II. The film depicts the horrific experiences of a Sherman tank division, and war in general, seen through an unsentimental lens.

Graphic footage poses unique psychological challenges for an editor. “There is such a thing as a filter where you allow yourself to be vulnerable versus where you put on your armor,” Dorn explained. “In the editing room, both the director and the editor have to have their armor off. Otherwise, they’re not really having an authentic dialog or authentic reactions to the material that is coming together.”

When cutting on a violent film, Dorn said she needs to feel the emotional and visceral impact so she can edit to make the storytelling real for the audience. Dorn admitted the effect of the violence was modified by the fact that it was a movie. The editor saw the slate and saw the actor who just got shot stand up after the director called, “Cut!”

The extent of footage, increased by the release date being moved up a month, was among the challenges the film posed. Ayer encouraged the actors to embody their characters, even though there was a “very nice and concise script.” During the rehearsal process the actors formulated scenarios that they were going to improvise, so during production the dailies contained a lot of material with different choices. “The desire to try them all and see them all, which was challenging,” revealed Dorn.

Fighting mates in war movies become like family, dysfunctional or not. Dorn credits the actors for their devotion to their roles and Ayer for allowing the complex characterizations to fully develop.

“You can show it in a simple, straightforward way – this guy’s the ruffian, this guy’s the newbie, this guy’s the Bible thumper – or you can make them more complex with subtleties where one minute the Bible thumper is reading scripture and the next he’s mowing down the motherf***ers,” commented Dorn. “You have to bring all those different aspects of the characters together in a way that still feels of a piece, creating a believable tapestry.” 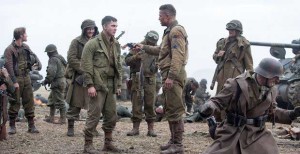 Dorn noted that Ayer had precise ideas in mind when shaping the performances. How the choices were made was a collaboration between the editor and director, as they reworked the scenes by going back and forth and shifting a little.

“One of the most wonderful things about Fury is that no matter what we did, which to us felt like huge changes, the performances were so rich and deeply embedded in what the actors were doing that it was all about getting it to exactly where David wanted it to be,” shared Dorn. “That is why we had so many people working on it. Giving a scene a slightly different slant could take several days.”

Lending a hand with the cutting were additional editors, Rob Bonz and Geoffrey O’Brien. Additionally, editor Jay Cassidy came on for about 2.5 months. According to Dorn, the editors often worked on the same scenes or merged versions of scenes, or an editor would cut a scene and Dorn would fine cut it. The cutting went back and forth quite a bit.

For Dorn, making a film is like making soup without a recipe; it is different every time. It is about figuring out what plays and how people will respond. The tricky part for her as an editor is not just responding to the material, but filtering the edit to support the vision of the director. If she gets an emotional response once the film is crafted and she steps away from the edit system to look at it, she knows that she has done her job right.

Dorn feels privileged to work with a director with such a strong vision and to be involved in what she considers to be a special film. “I think it is going to live on,” she concluded. “You don’t get that with every movie.”