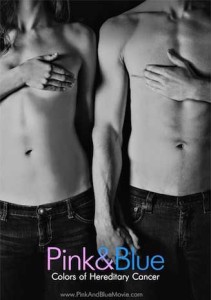 In 2013, actress Angelina Jolie brought the issue of hereditary cancer into the public consciousness when she elected to have prophylactic (preventative) surgeries to cut down on her genetic pre-disposition to breast and other cancers. She had tested positive for a gene mutation known as BRCA that puts both women and men at a heightened risk for developing numerous cancers.

Kicking off National Breast Cancer Awareness Month, the documentary Pink and Blue: Colors of Hereditary Cancer debuted at the Westside Pavilion on Oct. 2. The film will also be shown in New York on Oct. 23.

The documentary’s Emmy-nominated director, Alan Blassberg has lived the tragedy of cancer with numerous members of his close family dying from the disease. His beloved sister Sammy passed away from triple negative BRCA 2 positive breast cancer due to lack of information about genetic mutations.

As a male carrier of the gene, Blassberg was inspired to make the film not only to honor the memory of his sister, but also with the hopes of informing susceptible groups of their dangerous condition. He had the additional goal of highlighting the message that men are as likely as women to carry a BRCA gene mutation and this lack of information can be deadly.

Executive producer, Amy Byer Shainman, also know as “The BRAC Responder,” is a social advocate sharing information on hereditary cancer via various online platforms. Like Jolie, she is BRAC-1 positive and decided to take preventative measures to protect against getting cancer.

When Shainman learned of the Kickstarter campaign to fund the documentary, she immediately got in touch with Blassberg. They connected immediately. Shainman commented that he is, “my brother from another mother.”

Shainman trusted the director’s judgment from the start. The film became a team effort. Not only did Shainman bring funds to the project, but through her advocacy, she also had contacts to doctors and gene-carriers in the BRCA community who were willing to share their expertise and stories in the film. She was involved in the filmmaking process from the start, acting as a sounding board for the director.

Knowing that informing a greater number of people to seek out genetic counseling to determine their pre-disposition could be better served by the wider reach of a film, Shainman remarked, “As an advocate that is my goal. How else do you get a message out, but in a movie?”

The documentary follows a number of cancer survivors on their emotional journeys dealing with their experiences and personal choices. Interviews with pre-eminent specialists on hereditary cancer including Jolie’s surgeon Dr. Kristi Funk; co-founder of Pink Lotus Breast Center, Dr. Armando Giuliano, and Dr. Susan Domchek, bring the latest information in the field to the broader film-going public.

Film has the power to globally educate people. Pink & Blue: The Colors of Hereditary Cancer is not a downer film about the deadly disease. It is a compelling look at a difficult subject, moving but not sad, uplifting and filled with hope for the future. And it could save your life.

“Danny’s has been one of my idols, forever,” said editor Elliot Graham of Steve Jobs director, Danny Boyle. “A combination of Danny Boyle, Alan Sorkin and a bio of Steve Jobs is sort of the perfect storm of creative energies.”
[…]

Mad Max: Fury Road is the fourth installment in writer/director George Miller’s post-apocalyptic action franchise. It is also the first digital film for cinematographer John Seale, whose career spans more than 30 years and such iconic titles as Mosquito Coast, Witness, Dead Poets Society and Rain Man. Facing inhospitable conditions, intense action scenes and the need to accommodate a massive number of visual effects, Seale and his crew chose to shoot principal photography with ARRI Alexa cameras and capture on Codex Onboard recorders. […]

Growing up in Israel, when production designer Inbal Weinberg compulsively watched movies in high school, it was difficult for her to find any real information on what it would be like to have an actual day job in the film business. So she used her imagination! After attending film school at NYU, she worked with the great champion of independent filmmaking, Hal Hartley, and later served as production designer on Blue Valentine (2010), The Place Beyond The Pines (2012), and The Perks of Being a Wallflower (2012), just to name a few. […]