News Ticker
While much has been said about the stunning practical special effects of George Miller’s post-apocalyptic action film Mad Max: Fury Road, shot largely in South Africa and the Namibian desert, for visual effects supervisor Andrew Jackson, one of the best compliments is when people don’t even realize that what they are watching is, in fact, computer generated imagery.

In fact, for Jackson, the project spanned six years from preproduction to post. While Sydney-based visual effects house, Iloura, (formerly Method Studios), handled the vast majority of the film’s VFX work, Jackson had a team of about 15 people in the postproduction offices who handled over 400 shots. In total, the film has over 2,000 VFX shots out of 2,600.

“I was very much involved in shooting background plates and elements and a huge amount of still photography for environment enhancements,” said Jackson. “We got an enormous amount of material from the shoot to help in the post VFX.”

“A lot of what we did was augmenting what was already exciting live-action elements,” explained Jackson. That included a lot of environment extensions, as well as “some pretty major CG sequences as well.”

In particular, the film’s sand storm sequence was almost entirely a CG event, however Jackson explained that “My approach to visual effects is very much using live-action elements as much as possible. Even if it’s all CG, I always try to base it on some sort of element. So we shot the vehicles driving around for a base plate to work with. Occasionally, by the time you’re done, all of the elements in the shot have been replaced one by one, until there is nothing left of the original plate, but I still believe that the shots inherit something from the original plates that helps make them more believable. It may be only the camera move, but I feel that there is a benefit of basing a visual effects shot on some kind of a live-action plate.”

The film’s Citadel, the home base of the psychotic warlord Immortan Joe, is also entirely CG. 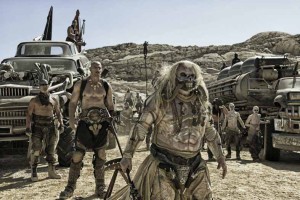 “To generate the CG rock structure, we actually used a location just outside of Sydney where there’s a huge vertical cliff,” said Jackson. “We flew around with a helicopter taking a lot of very high res stills and we used those to generate CG textures to wrap around the structure. So we built that structure from real location, but transformed it to the shape we wanted.” 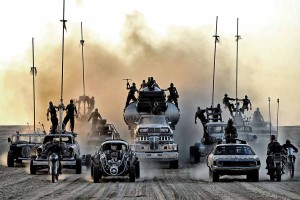 Jackson explained that one of the biggest challenges the VFX artists faced was the fact that there were about 1,750 shots where the vehicles are supposed to be on the move, engaged in the type of harrowing, life-and-death car chases that audiences have come to expect from a Mad Max movie, but about 600 of those shots were actually filmed with stationary vehicles.

Jackson explained that the film was shot on an ARRI Alexa, which has a native resolution of 2880, which gave them a little headroom to pan and zoom within the shots and still maintain a 2K image.

“George feels strongly about a technique he uses in editing to make the fast cut sequences flow smoothly, which is to focus on where the viewer’s eyes are at the end of one shot, and make sure that the subject is in that part of the frame in the next shot, so despite the speed of the action and the cutting, you never really get lost.”

“That process of lining up the subject does require blowing the shot up and re-framing it,” he added.

Another major CG environment was the canyon. “For the whole chase through the canyon, we did shoot in a canyon in South Africa, but there was hardly a shot there that was real,” said Jackson. “We made the canyon way taller than the actual location. To be honest most people had no idea that that work had been done. From a visual effects point of view, when people don’t know that they’re looking at VFX, that’s the ultimate compliment.”

On September 13, 2019, the 45th Annual Saturn Awards will take place at the historic Avalon Theater in Hollywood, California. For the first time in its history, the Academy of Science Fiction, Fantasy and Horror, who founded and owns the Saturn Awards, has made a multi-year partnership deal with veteran television producer Justin W. Hochberg, which has resulted in the upcoming, newly produced and reinvented Saturn Awards show. The new […]

A movie set in a computer game world, as Ryan Reynolds’ Free Guy is, with its main environment of Free City, obviously requires a lot of visual effects work by a number of different houses. One of the primary houses working on Free Guy is Digital Domain, who has also contributed to Marvel Studios’ Loki and Black Widow this past summer. Bob White was one of Digital Domain’s CG Supervisors, working […]