The integration of music, dialog and movement was integral to director Rob Marshall‘s fairy tale re-telling, Into the Woods. The important role of sound, and the need to record music in advance of production, meant that sound supervisor, Renee Tondelli, was first contacted when the director was doing read-throughs.

The production process deviated from the workflow a non-musical film might follow. Marshall, with cinematographer Dion Bebee, first blocked the movement in the scenes. The entire cast came to London for a one-month rehearsal period on set using pre-recorded playback.

“Everybody was there for each others’ songs,” Tondelli explained. “They said it was like going to camp.” By the time the cast recorded their songs in the studio, they had learned the physicality of each scene. “They were doing their records, with that intention. It’s not just standing in front of a mic. They’re actually going through it and falling and tripping and laughing, and knowing that at this point she is going to jump onto a rock. So you hear all of that in her voice, which is the best way to do something like that.”

As a choreographer, everything Marshall does has rhythm and a beat to it. “Rob’s specialty is to take a big scene and make it a big dance, to orchestrate it,” commented Tondelli. “In that orchestration, the actors learn all their moves. They learn how to work with one another. They learn what will work and what won’t.”

When the filmmakers started shooting, the recorded songs were played back on set, and played back loud; ear buds were not used because Marshall felt they were restrictive and disconnected the actors from the scene. The cast sang live to their recorded songs, which in turn were recorded using lav mics by production sound mixer, John Casali.

Because Marshall likes to shoot wide and tight at the same time, often the lav mics were the ones that needed to be used in post sound, despite having bleed-in from the playback. The live takes would then have to be matched with the beautifully full sounding songs from the studio. It was very tricky for dialog and music re-recording mixer Mike Prestwood Smith to get the performance to feel “consistent, integrated and genuine.” 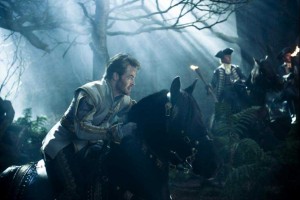 Despite putting together the songs out of a patchwork of pieces from different recordings that could be as small as a syllable, Prestwood Smith worked to make sure, “You never felt for one minute it wasn’t being performed in one wonderful piece.” They used their ears and time to get everything to match and feel correct.

The dialog elements that Prestwood Smith was working with were like a puzzle, according to effects and foley re-recording mixer Mike Keller, who enumerated them. “Mike’s elements were pre-records, set records, re-records and production ADR. Then Renee did a whole breathing pass throughout the movie to keep the rhythm going. If you clean everything out because you have to match all these different takes together, you’re starving for air because nobody inhales. They’re all singing lively. If you don’t get the breathing rhythm right, then something’s wrong with it. That’s what Renee did throughout the whole film.” 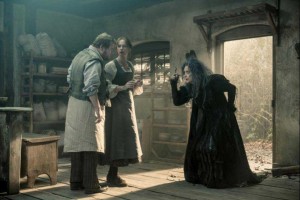 Prestwood Smith noted the unique nature of a Stephen Sondheim musical and how it added to the sound challenges. Often musicals have a bit of dialog and then a musical number, then they’ll stop and have more dialog. One of the things that Sondheim is noted for is that the singing and the dialog are tightly interwoven. The sung lyrics act as dialog and are story-driven parts of the complex narrative. “You’re suddenly going from singing to just talking like we are,” shared Prestwood Smith. “I might just burst into song at any moment. So you’re going from set recordings to pre-records all the time.”

Keller worked with Prestwood Smith to smooth over the edits in the vocal performances using the foley and backgrounds. “Raising some foley, raising a dress move or lifting one line a bit more than the other to go with the movement of that moment, suddenly makes the performance real,” revealed Prestwood Smith. “You spend all your time doing these small moves. Cumulatively they build up into this believable performance.” 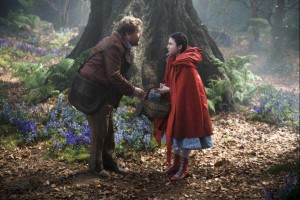 An example of the complex sound design and mixing can be heard in the 16-minute opening sequence that introduces the characters while intercutting and overlapping between various scenes at different locations. “I remember hearing him [Marshall] on a Q&A session recently saying that he wanted the whole opening section to flow like one integrated piece,” said Prestwood Smith. “Part of that flow is overlapping characters singing together when they’re not on screen at the same time. That’s got its roots in the stage play, which I think he was keen to stay faithful to as well, but having it be dramatic.”

The roadmap for the sound design was set up in the picture cutting room, which the sound team — that included Tondelli and co-sound supervisor Blake Leyh — embellished upon. Everything – the backgrounds, the new dialog, any changes, any adds, any particular set pieces – went into the Avid for Marshall to hear before being sent to the mix stage. The director needed to hear the sound to tell if it was right, so the mixers came on very early to do a mix that was close to a final. 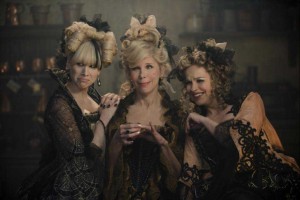 As a character in the film, the sound of the woods subtly reflected the moods of different scenes that take place within the confines of the forest. It was all thought out, even to details such as the type of bird tweet. “Each time we went to the woods it was important to establish a specific sound design that would happen just in that scene,” Tonelli said. “It was not a generic woods background that we used. Some scenes were scary, some exciting, some magical, some fantasy. It really had to represent the emotion of that scene. It was a real challenge to make that work.”

Although Keller found the sound of the giant in the story loud and, at times, scary, it was the subtle sounds of which he is most proud. “I’m the most satisfied with the foley or the environment where you just set it into the natural space and you never really know that it is a shooting stage,” he admitted.

The seven-month sound process, much like rehearsals, was about trying different things until it was right, finding all the things that felt true to the film.

“It’s not something you just piece together,” Prestwood Smith stated. “You learn it.”

Whiplash, a low-budget sophomore effort by 29-year-old director Damien Chazelle, who also wrote the screenplay, has emerged as the dark-horse darling of this year’s movie awards season. The building buzz is that it has a good chance to get nominated for the best picture Oscar, as well as in other categories. […]

American Sniper tells the story of Navy SEAL Chris Kyle (Bradley Cooper), a sniper whose skills earned him the moniker “Legend,” and his struggles to leave the war behind as he alternates between four tours of duty and time with his wife and family stateside. […]

Characterization, the art of defining each character individually and specifically, is the most important part of the costume design process for Jacqueline Durran, whose impeccable work can now be seen in Mr. Turner, director Mike Leigh‘s film about the eccentric painter J.M.W. Turner. Durran won an Academy Award for her achievement in Anna Karenina (2012). She has also been nominated for her work two previous times, for Atonement (2007) and Pride and Prejudice (2005). […]