J.C. Chandor is excited to be putting A Most Violent Year into the world. Written also by the director, the film, set in New York during the winter of 1981, statistically the most violent year in the city’s history, tracks the story of a man (Oscar Issac) as he attempts to protect his wife (Jessica Chastain), his family and expand his business amid the corruption and obstacles that stand in his way. Chandor is also known for Margin Call (2011), for which he received an Academy Award nomination for best writing of an original screenplay, and All is Lost (2013).

Chandor approached the writing of A Most Violent Year in a free form process. “It’s more of a tumbleweed rolling down an old Wild West street just picking things up over the years,” he said. The genesis of the film came from the characters of a husband and wife team who are trying to grow a business together that he had been building for six years. Wanting to explore the elements of ambition, happiness, success and compromise through these two characters, the perfect opportunity appeared as the director began also studying violence in movies. “These two concepts merged in my head and I decided to have that character piece be set in the most violent year in New York’s history, which when I started researching, I found out was 1981. From there I was off to the races.”

The cinematography was done by Bradford Young, also known for Pariah (2011) and Ain’t Them Bodies Saints (2013). Chandor had been a fan of Young’s work for a couple of years so he met with the cinematographer and showed him his lookbook of inspirational images that comprised street photography from the period. When Young showed his own presentation of images, the two realized they had selected many of the same images to show each other. “We were seeing the movie in the same way and that’s a pretty exciting thing when that happens,” the director said.

The film’s look was framed around the main character’s idea of the world. The formality with which the character approached life very much inspired the photography. “Basically, this is a character who essentially is walking into a painting of his imagination every time he walks into a room,” Chandor explained. “He’s a very self-serious, formal guy. Unlike my last film, where the camera just miraculously floated wherever it needed to be, almost at eye level, all the time, in this film I wanted to do the opposite. I wanted it to be almost as if this character, when he walks into a room, he sees himself in the room. He sets up his own tableau and makes sure he’s on the power side of the room and the light is behind him.”

Chandor had never worked with editor Ron Patane, known for his work on Blue Valentine (2010) and The Place Beyond the Pines (2012), but as soon as they began working together they found they were a perfect fit. Because the film is shot in such a formal way, there were oftentimes only specific ways to edit. It was a challenge at times to edit so justice was being done to the actors and good cuts were being made. 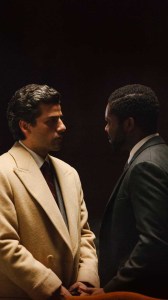 On hand to help create the world of the 1981 was production designer John Goldsmith, who collaborated with Chandor on All is Lost. “Obviously New York today looks very different from what it did 30 years ago and we knew it was going to be a tremendous challenge,” said Chandor. “It was a combination of an amazing locations team that just scouted their faces off for months and months and John and the props department doing all the amazing car work.”

Part of the story of A Most Violent Year shows how the year controls the couple. Visual effects came into play in the telling of this backstory. Much of the graffiti in the film was created with visual effects from actual graffiti artists of the period who licensed their artwork. This was brought into the world of the film via a digital stage. An example of this is the chase sequence that ends in a subway. The MTA lent a period train car that was driven on New York City train tracks but they didn’t want their newly renovated trains graffitied. “What I love to do in production is use your weakness and turn it into a strength,” said Chandor. “So we came up with this idea. What if we find real graffiti from that period and bring it into this world? That’s what I loved to do on my first three films, really trying to look at the inherent weaknesses of something and instead of running away from them, or trying to ignore that they even exist, to actually try to walk towards it and see if there’s not a new way of telling the story or some sort of interesting element to the weakness itself.” 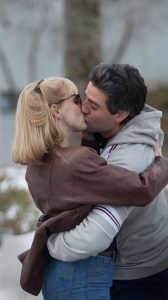 The costume design also played a part in taking the audience into the world of 1981. Kasia Walicka-Maimone, known for Moneyball (2011), The Adjustment Bureau (2011) and Moonrise Kingdom (2012), is the costume designer who dressed the characters in this film. “Kasia’s an amazing, talented woman,” Chandor said. He had long wanted to collaborate with her. “I tried to get her on Margin Call but she was unavailable at the time so it was really fun to get her on this movie. It was just a match made in heaven.” Walicka-Maimone worked tirelessly alongside Jessica Chastain to create the character of the wife. “I told Kasia that Jessica’s character is the kind of person who is so upwardly mobile and she’s interested in the kind of armor that clothing can provide, almost putting up a wall with herself and whoever she was dealing with in business.” Chastain discovered that during 1981 Armani was just getting started; he was on the cover of Time magazine and forming the idea of the power suit. Armani opened its archives in Milan to Walicka-Maimone and Chastain and many of its original designs were reconfigured for the film.

Oscar Issac’s suits were designed to be high-end knockoffs, based on the Armani power suits. “It was as if he had gone to a tailor with one and said, ‘Can you make me five more of these?’ which is a fun thing his character would have done.” Issac is also seen in much of the film in a Brooks Brothers camel hair coat. His character is not one who would have flaunted several coats all around town so this particular coat almost became a part of him, part of the image of himself he wanted to portray to the world. “It’s funny, that coat seems a little gangster-esque to us today but that was what the style of that period was,” said Chandor. “For me, that coat was Oscar’s character isolating himself from his heritage. He came to the U.S. when he would have been seven or 10 years old, and shed his past in a way so his wardrobe is based on what a businessman or a Wall Street banker would have worn at that time. There’s this waspy sense to it, but there’s always an ethnic twist.” 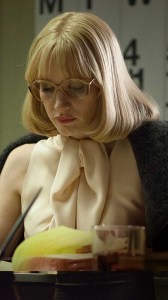 It was necessary to have a great team because of the challenges, such as making a film in a city that no longer looks the way it did in the time period depicted. Another challenge was the hectic schedule. The film was shot in 36 days at 72 separate locations on Long Island, in Westchester county and in all five boroughs of New York. As difficult as it was to navigate all the different locations, they were all important to the telling of the story. “The characters are totally caught up in their own lives and only notice what’s going on in front of them,” said Chandor. “But as the movie progresses, the audience, hopefully, is learning about the city and where in the world it is, slowly and over time.” The shoot happened during one of the coldest winters on record. There was 11 inches of snow on the first day of the shoot, which was a difficult situation to handle. “We took a look at the weather forecast and realized it would be freezing for the next five weeks and we decided to lock in the look of snow. We were essentially able to make a snow movie in New York City, which is a pretty awesome opportunity, but is obviously, as you can imagine from a perspective of logistical sampling, pretty stressful.”

Challenges notwithstanding, Chandor calls the making of this film “an awesome opportunity,” and has a shout out to his collaborators: “I’m super proud of everyone below the line here. Everyone did incredible work.”

“Once you’ve picked up the Bible, you’re asking for it as far as commentary goes,” production designer Mark Friedberg admitted. In the end, of course, Darren Aronofsky’s Noah defied these concerns, thanks to Friedberg’s collaboration with the director to produce such a believable, yet powerfully allegorical world. […]

Contender – Composer Jóhann Jóhannsson, The Theory of Everything

The score for The Theory of Everything, composed by Jóhann Jóhannsson, is perfectly tuned to the subject matter of the film. From the haunting piano and heavenly celeste, to the melodic theme that weaves throughout the narrative, the music creates a sense of wonderment that captures the essence of the life of Stephen Hawking (Eddie Redmayne) – his rapture with the mystery, beauty and poetry of the universe. […]

Graham Annable and Anthony Stacchi‘s film The Boxtrolls ends with a shot in which a long pull-out begins to reveal an animator at work around the foot-high puppets with which the film was shot. The fact that modern audiences may actually need this reminder of the almost absurd amount of effort that’s intrinsic to stop motion is an indication of how rare it is; not since Laika‘s previous film, the Oscar-nominated ParaNorman, has the technique won such widespread acclaim. […]