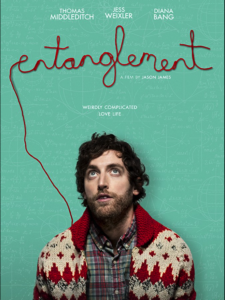 As the Entanglement script landed on the desk of producer/director Jason James (That Burning Feeling), he instantaneously developed an affinity for the material, due to the lead character’s journey in the quest to discover who we are and where we come from. Entanglement examines the thought process of clinically depressed Ben as he discovers in his thirties that his parents had planned to adopt a little girl named Hanna when he was young, so he would have a sister. For whatever reason, the adoption never came to fruition, and now as an adult, Ben becomes obsessed with the idea of searching for who he deems his long-lost sibling.

The film essentially revolves around three characters who are recognizable from various television series, being Thomas Middleditch (“Silicon Valley”) as Ben, Jess Weixler (“The Good Wife”) as Hanna, and Diana Bang (“Bates Motel”) playing Ben’s supportive friend and neighbor, Tabby. The director randomly found Middleditch crying, as he was filtering through taped interviews from the Sundance Film Festival and immediately wanted to cast him for the emotional role of Ben. Initially, Jess Weixler was not interested in doing the film, until she was swayed during a coffee meeting with James. The chemistry between Middleditch and Weixler is as natural as two kids happily playing in a park.

It is vital to nail the right tone for this alternative romantic comedy, because once Ben finds Hanna, he thinks he might be falling in love with her. “The tone oscillates between drama and comedy, because you have a guy killing himself with these awkward quirky things happening. We have these really dramatic beats to set up the comedy beats; to bounce between those two worlds is tricky and so it’s playing with levels, tone, and performance,” explained the director.

A major concern is having a passive central character with a mental illness carry the film. Jason James elaborated, “When you have a character who lacks motivation, is depressed, or going through something in that way; it’s not the most likable or the most engaging thing. How do you create empathy and understanding for a character that is maybe not in the best place or not making the best decisions? I can’t imagine any other actor playing this role. Thomas is just so funny, fragile, and sort of likable; but in this dark, cerebral weird way.”

The fun aspect about any psychological movie, is the seamless fluid point of view from one perspective to another. James clarified, “Ben is seeing things and hearing things, and you can do a lot of fantastical things with the camera in terms of depth of field and visual effects. The camera can help to express what is real and what is fantasy; what are we seeing vs. how we’re experiencing it. The idea of bringing things into focus, having things be out of focus, or walking into focus; playing with what’s seeable and not seeable.”

Underwater photography presents its own complications as well, as some scenes were shot in a swimming pool. “I needed about 16 shots. We have the stunt people, the safety divers, and there’s a speaker at the bottom of the pool where I can talk to the actors. It took two hours to get the first shot and I realized I might not make it through my shot list. Immediately, I started talking into the microphone telling the actors to swim here, dive there, and come towards us. We just kept shooting and rolling on these little pieces and luckily really beautiful stuff came out of it,” confessed the director.

James noted, “It was about trying to create a real and honest portrait of mental illness, depression, and loneliness that negates this fantastical, magical world view. How those emotions affect all of us at one point or another personally, with a loved one, or a family member. I wanted to show the beauty, lightness, and fragility of what he’s going through.”

Entanglement is now available On Demand/Digital HD. The DVD release date is July 2018.

No living director has mastered or popularized the disaster drama quite like German director Roland Emmerich has. From Independence Day to The Day After Tomorrow and even 2012, Emmerich has a unique, grandiose vision for portraying the ends of the world — and beyond. However, his last few attempts, such as the Independence Day sequel and his new movie Moonfall, have largely self-destructed under the heavy weight of the director’s overly grand ambitions. Moonfall finds him […]