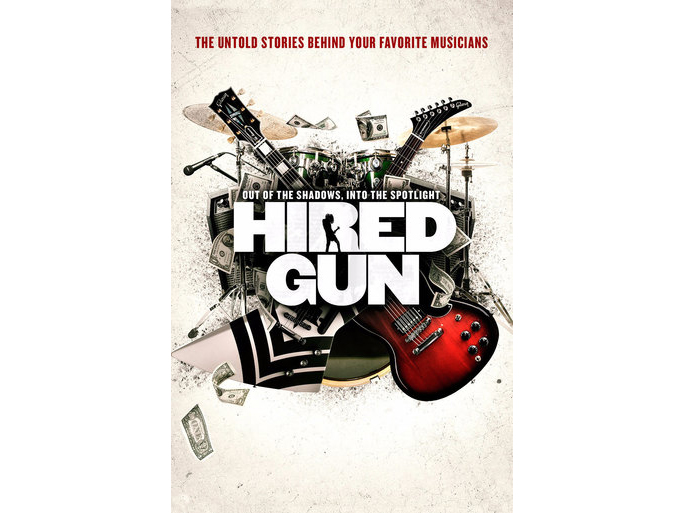 Kenny Aronoff. Nita Strauss. Rudy Sarzo. Liberty DeVitto. Derek St. Holmes. You’ve heard their music and have seen them perform, but more than likely you’ve heard their names. In Fran Strine’s feature-length documentary, Hired Gun, now on Netflix, studio and touring musicians in pop and rock music are given the rare chance to get first billing and tell their stories. “It opened my eyes to appreciate these guys,” Strine said of his journey in making the film, which included 60 interviews, 30 of which are in the finished work.

With a background in rock photography for magazines including Metal Edge, Hit Parader, and Rolling Stone, Strine became friendly with many of these musicians and performers. Eventually, Strine transitioned to a tour photographer and videographer for bands such as Staind, Seether, Slipknot, and Nickelback. Being naturally inquisitive, Strine realized that the backing bands in many recording and touring groups were mostly unknown to record and ticket buyers, much less to the general public.

A self-described “kid of the 1970s and 1980s,” Strine endeavored to interview the musicians in his favorite acts, though it became obvious it would be easier to access modern artists. “If it were up to me,” Strine revealed, “Hired Gun would have a lot more of the 70s and 80s players. The biggest group in America are Baby Boomers—they created so much of that music in that era. It was a shame that I wasn’t able to get more of that in the film.” Using his music industry contacts, Strine arranged to bring together several of the main musicians for group performances. “All of the guys were so cool and got along,” he recalled. “No big egos; it blew my mind. We rehearsed and moved into the recording studio. It was a site to behold—some of these guys are legends, doing it for nothing other than the love of playing music. It was a dream come true: one of the highlights of my career.”

For the interview segments in the film, sound recordist Thomas Corkran coordinated all of Strine’s audio, but for the live musical sections, Strine called Johnny K in Chicago, a Grammy-nominated producer, to record his sound. “It was very important for it to sound as good as it looked,” Strine said. “Our mixer is Scott R. Lewis at Skywalker Ranch. I took a chance and reached out to them. Lucky for me, they loved the concept of the movie. It was half of what anyone would have charged us in LA; I spent two weeks at Skywalker Ranch, mixing.”

As should be expected, a documentary about musicians-for-hire would inevitably include tragic stories of professional strife, and Hired Gun includes several heartbreaking moments, most notably amongst members of Billy Joel’s long time recording and touring band from the 1970s and 80s. Sidemen critical to Joel’s most successful period, including the aforementioned drummer DeVitto, plus guitarist Russell Javors, and bassist Doug Stegmeyer, who has since passed, were all impersonally dismissed by Joel.

Of the three, DeVitto had the longest tenure in the band, but was likely fired because of  a financial dispute; Javors only learned by listening to the radio that he was no longer in the band. Stegmeyer’s story is the most upsetting as he committed suicide in the years after leaving Joel’s core group. “I love Billy Joel—he is a genius songwriter, composer,” conveyed Strine. “I admire his body of work. If what he did to his band stands true, I lose a little respect for him as a human being. I don’t know how you do that to gentlemen you knew. They had been with him since day one, helped shape those songs.”

Though Strine raised some funds via crowdfunding, an angel investor, Todd Poulson, funded 90% of the film. Then, music supervisor Julie Glaze Houlihan acquired all necessary music clearances from various publishers and record labels, and archivist Kate Lingley located and secured many visual items, which would prove crucial to illustrating subjects discussed by the interviewees.

The final project, edited by Gavin Fisher, who also served as cinematographer, played to sold out film festival audiences and was soon licensed to Netflix for 18 months. “I love telling stories,” Strine said of Hired Gun and his upcoming planned films. “And I want to be moved: to laughter, tears, anger, frustration. If I’m moved, and the audience is moved, I’ve done my job.”

Strine’s next documentary involves Ray Parker Jr., an interviewee in Hired Gun. The project is entitled, Who You Gonna Call, named after a line from Parker Jr.’s smash hit song from the Ghostbusters franchise. “It’s way too big of a story to tell in Hired Gun,” Strine said of Parker, Jr.’s journey.

Over two centuries ago, the Gilded Age era was all the rage in New York City with mansions lining the streets and dirt-paved roads providing the way for horses and buggies. It was a time of extreme division between the haves and the have-nots, illustrated by the social society in which the wealthy held extravagant balls orchestrated by servants and butlers. All that is on display at the corner of […]

The Writers Guild of America, West and East, held concurrent ceremonies for the 2019 Writers Guild Awards on February 17, 2019 at the Beverly Hilton in Los Angeles and the Edison Ballroom in New York City. Awards were given to winners of outstanding achievement in writing for film, television, new media, videogames, news, radio/audio, promotional, and graphic animation. Writers Guild and SAG Award-nominated writer-actress-comedian Chelsea Peretti (Brooklyn Nine-Nine, Parks and […]

For the Los Angeles Post-Production Group‘s (LAPPG) January meeting, you can join the Director of The Creativity Conference, Maxim Jago, for a deep dive into best practices and far-reaching insights to help you keep the spark alive and maintain your creative flow. After exploring diverse approaches to the creative process with guidance from world-class creatives, Maxim will share practical advice and actionable steps you can take to find inspiration and […]