For The Purge film franchise, most of the pizzazz is in the makeup and special effects necessary to construct the gory, bloody scenes that characterize the movies. The latest installment, The Forever Purge, was no exception. As we wrote before the movie was released in July, the killing spree that is at the core of the plot of these films leads to violent indulgences and base instincts.

Perhaps an unsung technical hero of the latest entry in this saga takes the form of the movie’s costumes, designed in this case by Leah Butler, a Hollywood veteran with experience in the creepy suspenseful genre given her design of costumes for the Annabelle film series. For her latest rendition, Butler uses an inventive array of disturbing seeming face masks, such as a killer-looking bunny and certain Mexican “animas” (or souls), and well-crafted ranch hand clothing as well. Thanks to Butler’s work, the film, which stars Tenoch Huerta as a migrant worker who helps a skeptical family patriarch led by Josh Lucas reach safety, becomes memorable not only for the crimson red splatters but for the cowboy boats, headgear, and bandanas as well.

Last week, Below the Line spoke to Butler about how she designed the costumes for The Forever Purge.

Below the Line: Leah how did you come about to work on this project, and how did you go about starting to think about what you would design for its costumes?

Leah Butler: A friend of mine is one of the producers and he knew the director Everardo Gout was looking for someone, so he interviewed me about some of my past experience and ideas and hired me.

In terms of the work itself, we focused our efforts on the many masks that the various characters wear. We had a book about Mexican masks that we used to do our research. The Mexican masks we looked at focused on ghosts and mythical creatures, and pack a lot of information. It was helpful to us that we were able to prep together in the same space as the director and the production designer. We collaborated to make sure that the masks we came up with fit with the spaces they were constructing, like the stables and the like.

It was also important for us to achieve authenticity for the characters, on the one hand, Juan [Huerta] and Adela [Ana de la Reguera] as the Mexican workers who are of a more humble origin and Cassie [Cassidy Freeman] and Harper [Leven Rambin], the little more accommodated farmworkers. 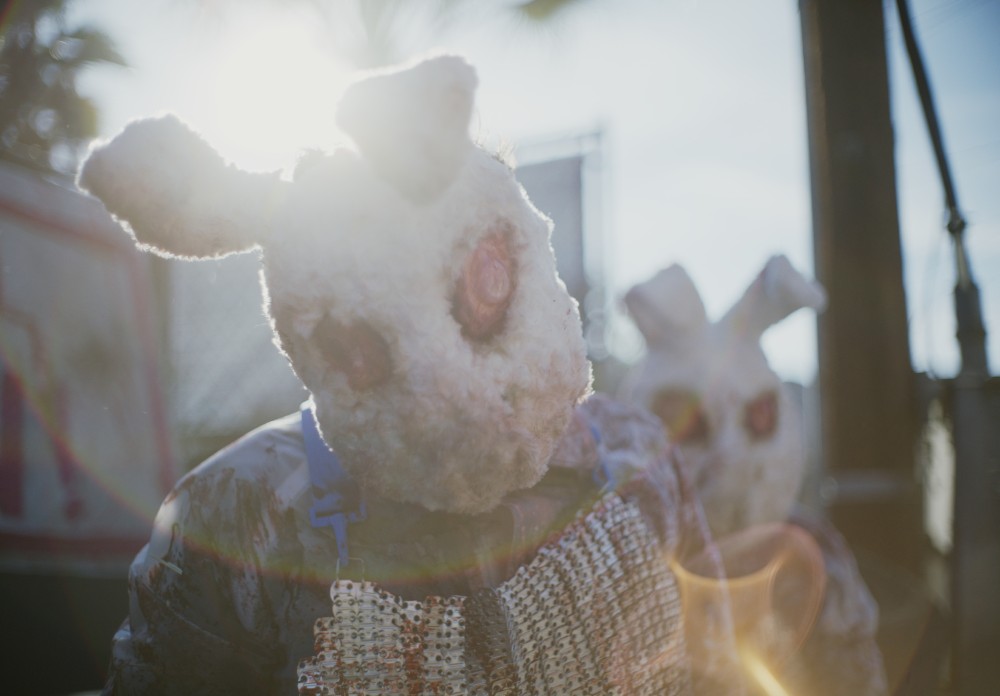 BTL: Is most of what we see in the film designed, or did you get it from a rack somewhere?

Butler: We actually designed most of it. We were able to put together various military and ranch uniforms quickly, and we did work to pull off memorable things like a coat for the older patriarch Kirk [Will Patton], who was lovely to work with in terms of getting stuff on his back. One of the producers, Sebastian [Lemercier] was involved with the prior films in the franchise, and he knew what we needed in terms of getting us to the right place with creating the costumes.

And all those masks you see, we designed them ourselves. We used a lot of metal, based on the idea of metal butcher’s aprons, and we focused on animals in part to convey the animalistic nature of humanity in these movies. That’s why you see those two rabbits for example. They are sort of bizarre, and that was the idea. I wouldn’t be surprised if people wear them for Halloween, which would be even creepier. And we also designed the Mexican masks, the idea there was to convey the spirituality of the culture and to pay homage to it really, but there is also supposed to be an element of eeriness about those as well.

We actually had gone to costumes houses for some of the masks at first and found that they did not really work, which is why we ended up with our own.

BTL: Tell us more about the materials you used for the masks.

Butler: In addition to the metal, we used bone-like material and put bones on some of them. Death is ever present in this story, so that was the idea there and, again, ultimately our main objective was to make it all more like “WTF is going on here?” It was helpful to have horror experience under my belt and to understand the importance of collaboration as we were designing a lot of these on set and in the same space. The masks could convey innocence or also scary feelings. That is why we had the pastel for the bunny rabbit mask but also blood. We lit up some of the masks with light, and of course there is the butcher, which was one of my favorites putting together. To get to the final product we did a lot of camera tests and that is when we realized very early on that the costume shop cameras did not work, we had to make them on our own. 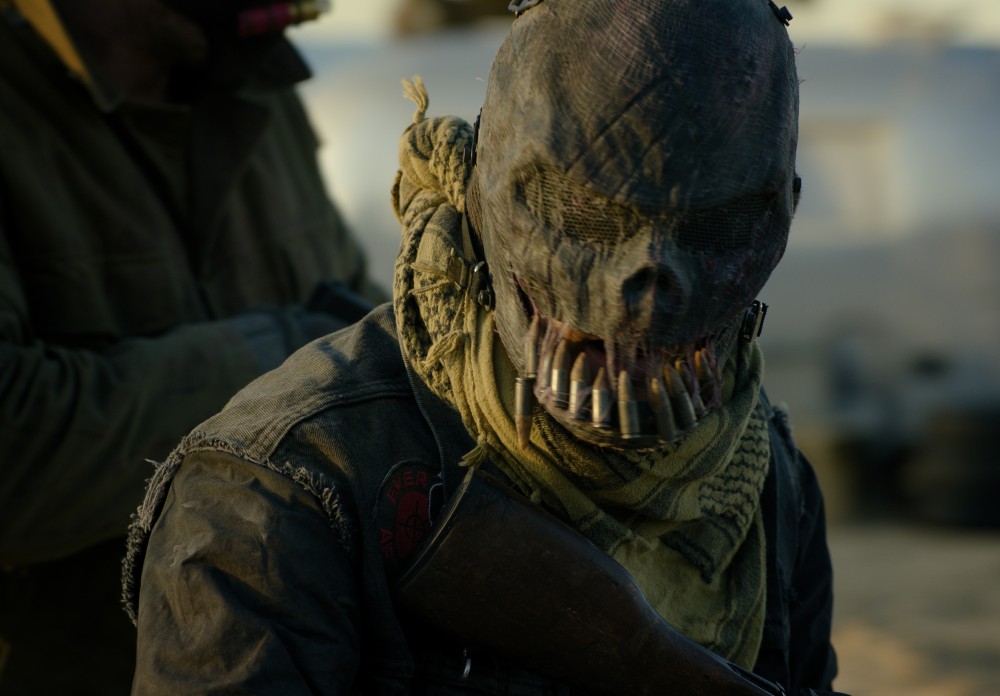 BTL: You have talked about suspense, fear, and even innocence. What were the other themes or messages you were trying to convey with the costumes you designed?

Butler: Believe it or not, realism was very important to us. So you have a rivalry between Juan and Dylan, there is some sort of jealousy from the latter to the former. To convey this, we needed to make sure that Juan’s clothes were a little drier, a little more tattered. For Dylan, just a little more upscale. He is still working on a ranch, but he has more social status. So we started with a conversation: “Who are these characters?” Before we started designing. Dylan is a successful but hardworking rancher. Juan is just as hardworking but completely blue collar and that is a theme of the movie for sure.

Then you have the women. Adela is the strongest one of them. Her strength came also from her work ethic and her valor, and making sure she surrounded herself with people she trusted. So I needed Ana [who plays Adela] to be very comfortable in the clothes she was wearing but also for the clothes to convey that sense of strength. So you have the jeans and the tighter frames for her. And actually the same applied to Cassidy, in terms of comfort, because she was pregnant and we had to have her running around with a baby bump that we installed in there for her. I actually have a company that I work with closely for those that makes them very authentic looking but also that they will not fall off in the middle of a complicated shoot.

BTL: What is next for you after this film?

Butler: I just wrapped a comedy called Umma. It’s very different in style and in tone, but I really enjoyed myself. I like the challenge that comes from working in different genres and with a variety of creative voices.

The Forever Purge was released theatrically on July 2, 2021, and will be available digitally on Tuesday, Sept. 14, and on Bluray and DVD on Sept. 28.

All photos courtesy Universal Pictures, except where noted.

The Beatles: Get Back Sound Editing Team on Revisiting and Cleaning Up Audio From 50 Years Ago for Peter Jackson’s Hit Docuseries

When you watch Peter Jackson’s docuseries The Beatles: Get Back for the first time (or the 20th, as some may be wont to do), you’ll surely be amazed by how great it sounds, though you might not know the behind-the-scenes efforts that went into creating that glorious sound. A team of sound editors cleaned up audio from a number of different sources, synced it all up, and gave the sound […]

For the first time, the Law Enforcement and Emergency Services Video Association (LEVA) will host a free CCTV seminar for homeowners and business owners during the 2016 LEVA Digital Multimedia Evidence Training Symposium. The seminar, “Surveillance Video is to Protect and Prevent: What is Your CCTV Missing?” will be held Tuesday, Nov. 15, from 10 a.m. to 3:30 p.m. at the Hilton Doubletree Paradise Valley in Scottsdale, Ariz. Hosted by […]

Next PNYA Post Break Explores Relationship Between Editors and Assistants

The next Post New York Alliance (PNYA) Post Break free webinar on Thursday, March 25, 2021 at 4pm Eastern is called “The E&A Team,” and in honor of Women’s History Month, it will examine the way two top female editors have worked with their assistants for shows on HBO, Freeform and more. Agnès Challe-Grandits, editor of the upcoming Freeform series Single, Drunk Female and her assistant, Tracy Nayer, will join Shelby Siegel, Emmy and ACE award winner for […]