News Ticker
Steven Sprung has been a film editor for 15 years, working on a variety of film and television projects. But more recently, he has turned to his lifelong love of directing, an interest which started in high school. But how does a career editor break into the above-the-line heights of directing as a regular vocation?

Sprung attributes his longevity in the industry to a combination of skill and personality. “As an editor of TV comedies, I have good comic timing,” he stated, “but more importantly, I’m easy to get along with and I help producers achieve their vision. They appreciate that.”

In editing comedies, including the current shows Community and Happy Endings, Sprung noted that his ability to choose the best material from all the footage is only part of being an in-demand editor. “It’s knowing how to cut for the laugh,” he said. “Sometimes, you can find humor that wasn’t necessarily evident when first looking at the footage by stealing a line or a reaction shot and putting it in a new place.”

With over a decade-and-a-half experience as an editor on shows such as Arrested Development and Entourage, and numerous accolades for his work, including an invitation to membership in the American Cinema Editors (A.C.E.), Sprung is certain that his experience has made him a better craftsperson. “When you’ve faced creative challenges on so many different shows, it eventually becomes second nature,” he revealed. “Problem-solving is easier and the whole process becomes a lot more enjoyable, especially since I don’t feel I have to prove myself now. I’ve become bolder in my partnership with directors and producers, and that makes a big difference in the quality of the work.”

Sprung noted that building a reputation is key to success. “Directors and producers either like you and hire you back, or they recommend you to someone else,” he said. “It’s this recommendation along with the credits which really make the difference.” If any doubters feel as though reputation is secondary in getting below-the-line jobs, Sprung underscored its importance. “Producers usually don’t call my references, but rather the people they know. The main thing is ‘is he good? Is he easy to work with, and what was your experience?’ – your basic work relationships.”

With his career as an editor firmly cemented, Sprung began to seek out directing opportunities on the shows he has edited. “It was always on my mind – directing is what I’ve done since I was very young,” he said. “I was promoted to full editor on [the TV show] Clueless. Within a month or so, I asked the executive producer if I could direct an episode! He was very supportive, but told me I should spend some time as an editor first. In hindsight, it was probably for the best. I was just getting started. A few years later, directing started to become more possible. If I had stayed with Arrested Development longer, I probably would have had an opportunity to direct, but I left after season one.”

The reason he left was to pursue the making of his feature film Dispatch. “I was driven to get it made,” he stated about the gutsy decision, “This drive guided a lot of my choices for several years, leading me to turn down some pretty choice editing opportunities. But I don’t regret it.”

Although it took longer than he expected, his dream was realized last year when he completed Dispatch, which he co-wrote and directed. The film takes place during one harried night in the life of a Hollywood limousine dispatcher.

Sprung learned many lessons on the project, most of which was shot in one location- a set which was built in a downtown Los Angeles warehouse. “I thought making a movie that took place in one location would make things easier, but it didn’t,” he said. “It was more complicated because it was a large cast. Coordinating all those schedules is more complex than shooting a small cast in many locations.”

Also, Sprung knew that since the film was set in the one location, he would need to work to make his first feature visually interesting. “My DP and I planned everything beforehand so that it had some variety,” he described. “We got the main character away from his desk a lot, which really helped. Since the film has a noir tone, I decided that I wanted to shoot in widescreen and give the film a classic early ’70s feel.” Sprung says it was the movie he wanted to make. “I had very few creative compromises; and none were not imposed by any studio,” he noted. “This may never happen again as my budgets get bigger.” 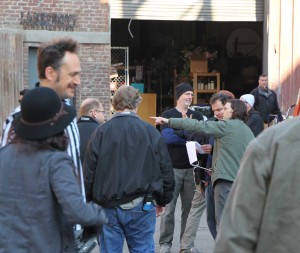 After the completion of Dispatch, Sprung began to get more directing opportunities. Six months after the feature was finished, while editing Community, he was invited to direct an episode. Moving from directing his film to episodic television was eye-opening for Sprung. “On the TV shows, the director is part of a very large team of creative people,” he said. In the Community episode he directed, Sprung “really got to have fun” as he put his own stamp on the work, but he notes that directorial touches are ultimately an aside. “It’s fun to be able to play a little bit, but nobody cares about shots or remembers that stuff,” he stated. “Did they laugh or did they feel something? Did they like the story? I always try to make my shots serve the story.”

After Community, Sprung was invited to edit season two of Happy Endings, with the promise of directing an episode if it got picked up for a full season, which it did. Sprung edited 10 and directed one of the 21 episodes of the season.

“The episode I directed was extremely ambitious with a lot of action,” he said. “It was very challenging, but the script was great, and the crew was not only excellent but also very supportive and eager to help me get the job done well. They told me ‘we have your back’ and they really did.”

Like others who have come to directing from cinematography, production design, and postproduction, Sprung truly enjoyed the process. “I love directing,” he admitted. “And I am finally becoming as comfortable in that position as I have been as an editor.”

As for lessons learned? Sprung claims that the most important thing is listening to his cast and crew. “Of course I have a plan and am ultimately going to make the final decisions, but the intelligence of the community is far greater than anything I can come up with on my own,” he said. “I think that’s one of the primary jobs of a director: to filter ideas and incorporate them into the show at every step along the way.”

For Sprung’s next feature, he is developing a paranormal mystery written by his Dispatch co-writer Michael Bershad. The story is inspired by true events. “This has a very specific niche audience,” he said. “This character is experiencing strange events and eventually becomes involved in a government cover-up. It’s very noir, which seems to be our style when it comes to movies.”

Sprung’s work in postproduction brought him an Emmy nomination and a membership invitation to the American Cinema Editors.