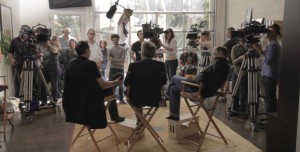 Renowned cinematographers Janusz Kaminski, Phedon Papamichael, ASC, GSC and Wally Pfister, ASC announced the launch of Advanced Filmmaking – an online series of instructional videos designed to inspire and inform aspiring filmmakers. In addition to extensive interviews with the principals, Advanced Filmmaking offers more than 12 hours of informative chats with a wide range of colleagues including Alexander Payne, Wim Wenders and others.

“We conceived Advanced Filmmaking as a way to communicate lessons that aren’t normally covered in film school,” said Papamichael. “In our interactions with students and young filmmakers around the world, we saw a thirst for information about other topics like successful collaboration, making good career decisions and managing your personal life.”

Two years in the making, Advanced Filmmaking distills the advice of three respected filmmakers. The trio met at the dawn of their careers making low-budget films for Roger Corman. Since then, Kaminski has made more than a dozen films with Steven Spielberg, earning two Oscars along the way. His credits include Schindler’s List, War Horse, The Diving Bell & the Butterfly and Lincoln.

Papamichael, an Oscar nominee for Nebraska, has more than 40 narrative credits with top directors like Payne, Gore Verbinski, and James Mangold including Walk the Line, The Descendants, The Ides of March and Sideways.

Pfister, a four-time nominee, won the Oscar for Inception, the culmination of his collaboration with director Christopher Nolan, which has also produced Batman Begins, The Dark Knight, The Dark Knight Rises and Memento. Pfister made his feature directorial debut last year on Transcendence.

“There is so much more to carving out a successful career than knowing exposure, camera placement and shot selection,” said Pfister. “Those nut-and-bolts skills are important, of course, but we have learned so many hard-won life lessons along the way, insights I wish I’d known when I was starting out. That’s the idea behind Advanced Filmmaking.”

A seminar highlighting the rollout is planned for this year’s Camerimage International Festival of the Art of Cinematography, held annually in November in Poland. Papamichael and Kaminski are slated to attend.