According to new data recently published by FilmLA, the overall on-location filming in Greater Los Angeles has declined 5.2 percent from July through September. A total of 9,226 Shoot Days (SD) were logged during that period. 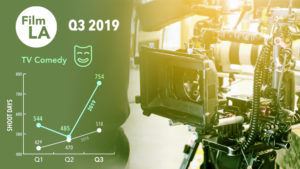 FilmLA researchers characterized the report as atypical, and unusually at odds with other production indicators and local employment trends.In the Television category, TV Comedy production increased 45.6 percent to 754 SD during the third quarter. 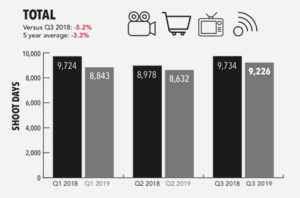 Feature film production, which has generally struggled in 2019, dropped 24.7 percent to 980 SD. Film projects brought to Los Angeles by California’s film incentive contributed 7.3 percent, or 72 SD, to the Feature category in the third quarter. Incentivized features recently filming in LA include Bliss, Covers, Revenge and The Little Things.

Commercial production, which has also struggled this year, trimmed its year-over-year losses to just 5 percent in the third quarter, declining to 1,330 SD.

In the end, La La Land won, and it stuck. That was the conclusion to a convivial evening, a kind of coda to award seasons at large, where the LMGI — Locations Manager Guild International — actually goes ahead and holds its own show after the Oscars, going against unspoken, well, La La Land tradition. But they have a plausible excuse: “Oh? Sorry. We were away on location.” Which made […]

Five individuals have been selected as winners of the 2021 Academy Nicholl Fellowships in Screenwriting competition.  The fellows will each receive a $35,000 prize and mentorship from an Academy member throughout their fellowship year.  From November 8 to 12, one fellow per day will be featured on the Academy’s YouTube channel, in content including conversations with filmmakers Destin Daniel Cretton, Phil Lord, Our Lady J, Rawson Marshall Thurber, and Olivia […]

When you spend time watching independent films on the film festival circuit, every once in a while, you’ll find a real gem, a movie that ends up being so much better than you may have expected, maybe because you’re unfamiliar with the filmmakers. That was definitely the case with Mario Furlani and Kate McLean’s Freeland, a movie I first saw at the Oxford Film Festival in Mississippi last year (actually, […]