When visual effects supervisor Tim Alexander undertook the task of bringing dinosaurs to life for the third Jurassic Park sequel, his challenge was made somewhat less daunting due to the familiar territory of Industrial Light & Magic as the project’s effects base.  “Being at ILM, we had a lot of history,” he said.  “A lot of the people who worked on the original are still there – Denis Muren [visual effects supervisor] and Phil Tippett [dinosaur animation supervisor] consulted with them extensively on what they had done, and why they had done it.”

Given a newcomer to the big effects movie with director Colin Trevorrow, Alexander knew that a fresh approach was in order for Jurassic World.  “Colin came in with a clear vision of his script and what he wanted to do,” Alexander stated.  “He’s an amazing collaborator. He gave us a lot of creative freedom. With the visual effects. He embraced it and let us run with it.”

Citing that the new film was both “a Jurassic Park movie and its own entity,” Alexander understood that he needed to keep the effects in basically recognizable configurations while allowing for new directions. In one new approach, Alexander utilized motion-capture performances to realize the onscreen animation of the velociraptors and some of the other dinosaurs.  “Glen McIntosh, animation director, experimented early on,” said Alexander. “It gave us a new natural look for the animation. We ended up casting a person [for the physical aspects of acting using motion capture] at ILM to give us a consistency in the performance. There were individual people being that raptor. We had suits that they would put on with a tail on it.”

Wearing a gray suit for motion-capture performance, the actor would execute the raptor movements onstage while Alexander and his team could check a monitor to see a raptor interpretation of the performance in real time, enabling ILM to make performance decisions rapidly.  “We were able to turn around these performances quickly,” Alexander explained. “You can really feel the performance. On set [in Hawaii and Louisiana], we had people cast as the raptors with these funky raptor helmets. We didn’t use their performance, but they had gray suits so Colin could choreograph the whole sequence.”

Although computer-generated raptors were key characters in the 1993 film, trying to restore computer models from over 20 years ago proved to be impossible. As a result, in Jurassic World, the herd of raptors are all dissimilar. “From JP1 to JP3, the raptors are totally different from each other,” revealed Alexander.  “We had to look at all of that lore and go to Colin to see what the raptors would look like. We had one basic look, but four different versions for the different characters. We gave Colin a lot of options.”

Of course, the star of the first Jurassic Park film was the Tyrannosaurus Rex whose appearance in the new film is relegated to one key scene. As with the raptors, Alexander’s group checked the earlier computer-generated version of the T-Rex, but its design varied among the different scenes and films in which it appeared, mandating a fresh approach. “You had to make a decision of what it would look like,” said Alexander. “We restored the geometry [from the 1993 film] to give us a guide what the CG one looked like.” 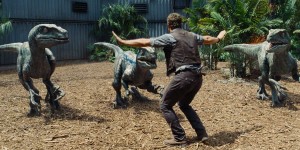 Much as the T-Rex starred in the 1993 film – and to some degree in the first two sequels – Jurassic World’s lead dinosaur became the Indominus Rex, a crossbred T-Rex and raptor. “It was our main character,” Alexander said of ILM’s chief workload, noting that I-Rex was designed as if her bones could have believably been dug out from the earth. “Her design started before ILM. Legacy Effects did artwork for her – almost half-fish. We took over the design work. Glen McIntosh did design work on her as well. There’s a lot of people who have opinions and need to be happy with the designs. Over time, we lost the fin, added spikes.”

In finessing the I-Rex design and behavior, Alexander remarked that his team went to the origins of the character. “Her design comes from reading the script, talking to Colin and figuring out what she needs to do,” Alexander reflected, noting the classic artistic predilection of form following function. “We needed to take into consideration what action she needs to do. Colin pointed out that he wanted her to have different weapons different from the other dinosaurs. She has long arms and hands and a very powerful thick tail. Knowing that he wanted to use those actions in the film helps us to define what that character was going to be. She needed to run 35 miles per hour and that goes to limb length – all of those design considerations.”

Once final designs were in place, and principal photography commenced on Jurassic World, an ILM representative was on set for the duration. “Any time we have a visual effects shot, I am there,” said Alexander. “We try to be as in-the-background as we can be. The director and DP get in there to do what they need to do artistically. We are there so that the plates will be usable when we get back.”

During production, given the oversize animals which ILM would be inserting into its VFX shots, the company developed a new app for iOS called Cineview so that there would be instant representation for the creatures on set. “I can get the same frame that they have on camera and see the dinosaur viewed on my iPad,” Alexander explained. This gave him the ability to immediately tell, for example, if the gargantuan Indominus Rex would fit in the background plate. “We could have discussions about how big the dinosaurs were going to be and if they were going to be framed correctly. With numbers of dinosaurs and different locations, we could see if the dinosaurs would fit.”

Of ILM’s 988 VFX shots in Jurassic World, about 700 contained dinosaurs. Finished character animation shots had to be delivered from the firm’s Letterman Digital Arts Center on the Presidio in San Francisco eight months after principal photography was completed. “It was not a lot of time,” Alexander said. “Schedules are getting shrunk.”
According to Alexander, the biggest challenge was a climactic shot near the end of the film which was one continuous 70-second-long piece that included the Indominus, T-Rex and Raptor. The shot took 36 people and five months to complete. 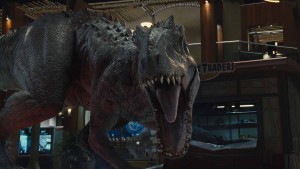 Though a silent participant on Jurassic World, Steven Spielberg, director of the first two films, was involved in the development stage, approving all of the dinosaurs’ designs. “The Indominus we got feedback and that changed things,” Alexander said. “Colin, Steven – they need to be happy with their main character. They go through iterations. Colin did his director’s cut, and that’s what ended up on the screen. Everybody believed in Colin’s vision. From Colin’s script to what got on the screen are very similar.”

One of 2015’s biggest hits, Jurassic World’s success ultimately reinforced the moviegoing public’s ongoing fascination in viewing photoreal creatures from the distant past. “I wasn’t expecting the reception we got,” said Alexander. “I was so pleased that everybody really liked it. The visual effects got good reviews. We strive to be perfectionists. In the end, we did get a really good result.”

Since Jurassic World wrapped Alexander has been in ILM’s X-Labs area where he is experimenting with a combination of augmented reality and virtual reality where a user experiences real-time graphics in a virtual production. “We’re waiting to see what my next movie is,” he said.

One of this year’s most successful independent movies, Ex-Machina is a stylish and edgy science fiction film that has captured the attention of audiences with its timely theme of Artificial Intelligence or AI. Basically a three-character film, it features three of Hollywood’s fastest-rising young actors – Oscar Isaacs, Dohmnall Gleeson and Sweden’s Alicia Vikander. It is helmed by English director Alex Garland who also wrote the screenplay. […]

“Music is the beating heart of the movie,” stated Harry Gregson Williams, about the emotional connection of music in films.
[…]

Mad Max: Fury Road is the fourth installment in writer/director George Miller’s post-apocalyptic action franchise. It is also the first digital film for cinematographer John Seale, whose career spans more than 30 years and such iconic titles as Mosquito Coast, Witness, Dead Poets Society and Rain Man. Facing inhospitable conditions, intense action scenes and the need to accommodate a massive number of visual effects, Seale and his crew chose to shoot principal photography with ARRI Alexa cameras and capture on Codex Onboard recorders. […]