Welcome to the weekend!

And what a weekend it’s gonna be if you’re a member of one of the guilds or societies holding their annual awards ceremonies over the next few days. Friday night sees the Annie Awards for animation, and the Motion Picture Sound Editors‘ 68th Golden Reel Awards.

Then on Sunday, the American Society of Cinematographers hands out its own 35th Annual ASC Awards.

… and then we get a full week off before the Big Daddy of awards shows, the 93rd Annual Academy Awards on Sunday, April 25! 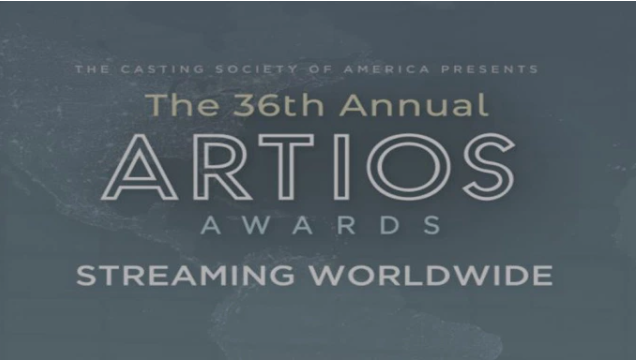 Speaking of awards and in the “learn something new every day”, last night was something called the Artios Awards, livestreamed by the Casting Society of America. This was the group’s 36th (!) awards ceremony. Just goes to show you that there’s a lot of faces of the below-the-line crew, and casting directors play an important role in every show. There Artios Awards has 29 categories, covering film, television and theater, but we will stick with the first two.

Aaron Sorkin‘s The Trial of the Chicago 7  won for Big Budget, Drama, Borat Subsequent Moviefilm won for Big Budget, Comedy, Soul  won for Animation, One Night in Miami  won for Studio or Independent, Drama and Minari  won for Studio or Independent, Comedy. On the TV side of things, the winners were Succession, What We Do in the Shadows, Euphoria, The Great and Normal People. Definitely something we’ll have to keep an eye on, because there never can be too many awards.

Sad news comes from Industrial Light and Magic (ILM), reporting last night that model maker Ira Keeler has passed away after working at the VFX house for two decades on films like Indiana Jones and the Temple of Doom, Back to the Future, Who Framed Roger Rabbit, and many more.

ILM Model Makers Ira Keeler (right) with Michael Fulmer working on a miniature Ford Tri-motor aircraft on the roof of ILM's main stage where shooting would later take place for Indiana Jones and The Temple of Doom (1984). pic.twitter.com/YvnZrhQ0DN

Let’s see if there’s anything exciting going on in the world of production, shall we?

A few weeks back, we reported on the controversial casting of Nicole Kidman as Lucile Ball in filmmaker Aaron Sorkin‘s Being the Ricardos with Oscar winner Javier Bardem playing Ricky Ricardo.  It looks like Sorkin is already in production from the set photo (at left) of  Kidman that has been making the rounds. What’s even more interesting is that Sorkin is at the same time on the campaign trail for his Netflix film, The Trial of the Chicago 7, and presumably he’ll take a break to take part in next week’s Oscar ceremony for the film.

Anyone who had any doubt that a fifth Indiana Jones movie was in the works got the news last week that Phoebe Waller-Bridge had joined Harrison Ford in the cast. Just yesterday, it was announced that Danish actor Mads Mikkelsen, whose movie Another Round received two Oscar nominations, has joined the two of them for the James Mangold-directed action sequel. No word whether Mikkelsen will continue his long run of playing villains in everything from the James Bond movie, Casino Royale, to Marvel Studios‘ Doctor Strange, or this might be a more layered character like his leading role in Another Round or the series Hannibal, but the casting for this presumably final chapter in the franchise is looking grand.

In odder casting, it was announced that Jacob Tremblay, the young star of Room and Wonder, will be joining Peter Dinklange from Game of Thrones in Legendary Pictures‘ planned remake/reboot of Troma Studios’ horror-comedy, The Toxic Avenger, according to Deadline. Macon Blair (I Don’t Feel At Home in this World Anymore) is directing.

Did that seem like the oddest casting news of the week? Well, how about this one. Carey Mulligan, who is nominated for an Oscar for Promising Young Woman, seems to have taken a liking to comedy after hosting Saturday Night Live last weekend. She’s signed on to co-star opposite Adam Sandler in his latest Netflix venture, Spaceman, based on the novel, The Spaceman of Bohemia by Jaroslav Kalfar. She will play the wife of Sandler’s astronaut who is sent to the far end of the galaxy to collect mysterious dust, his only companion being a creature lurking in his ship. It sounds more like comedy with a lower-case-c, and it’s directed by Johan Renck, the Emmy-winning director of HBO‘s Chernobyl. Like Sandler, Mulligan has appeared in a number of Netflix films, including Mudbound and The Dirt.

Another filmmaker likely to be quite busy during the last vestiges of this year’s Oscar season is filmmaker Florian Zeller, whose play adaptation The Father has scored a number of Oscar nominations, including Best Picture, Adapted Screenplay, and two for the performances by Sir Anthony Hopkins and Olivia Colman. In fact, it won at the BAFTAs for Hopkins and Zeller’s adaptation of his own play this past weekend. Like Sorkin, Zeller isn’t resting on his laurels, and he’s already moving forward with his next film, The Son, which has just cast Hugh Jackman (Bad Education) and last year’s Oscar-winner in the supporting actress category, Laura Dern. Since this one was also adapted by Zeller with Christopher Hampton from his own play, this might be another awards player in the coming year.

After a pretty long break since her previous movie, Lucy in the Sky, Oscar winner Natalie Portman seems to be coming back big time. First of all, shes returning to the Marvel Studios with Thor: Love and Thunder, currently shooting down in New South Wales, Australia, but she’s also signed on to star and exec. produce HBO Films‘ adaptation of Elena Ferrante‘s best-selling novel, The Days of Abandonment, currently in preproduction from Novitiate writer/director Maggie Betts.

Gabriel Luna is joining the upcoming HBO series, Last of Us, based on the hugely popular Sony Playstation game, playing Tommy, the former soldier younger brother of Pedro Pascal‘s Joel, one of the two leads with Bella Ramsey‘s Ellie.

Because it feels at times like this column has been turning into the ¨Bridgerton News Central,” we deliberately pushed this one down a bit, but yes, Netflix did in fact order two more seasons of the popular costume drama series, even with the absence of the show’s breakout star, Regé-Jean Page.

CBS has  renewed a slew of shows including it’s flagship NCIS, Blue Bloods, Magnum P.I., and S.W.A.T. The drama NCIS is heading into its nineteenth season despite the offshot, NCIS: New Orleans coming to an end and NCIS: Hawaii already in production for next season. Blue Bloods is heading into its 12th season, while the renewed S.W.A.T. was picked up for its fifth season, and Magnum P.I. is getting its fourth. The other “remake series” MacGyver is also coming to an end this season.

You can see the social media announcement below:

What do these shows all have in common? They are all…RENEWED.

On top of that, the Cinemax series Warrior has been renewed for a third season, but this one will air on HBO Max instead.

It was reported this week that Attack the Block director Joe Cornish will be tackling a movie based on Mark Millar‘s space odyssey comic Starlight, presumably for Netflix who bought Millar’s Millarworld a few years back and has the series, Jupiter’s Legacy, hitting the streamer next month.

Also, Kong: Skull Island director Jordan Vogt-Roberts will be helming a live action Gundam film for Netflix, that one based on the popular  Japanese animated series and related comics. That’s based on a screenplay from another comic book creator, Brian K. Vaughn.

Star Wars: The Last Jedi‘s star Kelly Marie Tran is getting more involved with production, having just signed as Executive Producer for Carlos López Estrada‘s second film, Summertime, which will be released by Good Dead Entertainment. It will be the duo’s second collaboration after she voiced one of the title roles in Estrada’s Disney animated movie, Raya and the Last Dragon.

Keeping it in the comic book and animated realm, Deadline reports that the animated series based on the 60s underground comic, The Fabulous Furry Freak Brothers, is indeed moving ahead with Lionsgate on board, although it will be shortened to The Freak Brothers, and it will transport the stoner characters from 1969 to 2020. Andrea Savage (I’m Sorry) and La La Anthony from Power have joined the voice cast that already includes Woody Harrelson voicing Freewheelin’ Franklin Freek, John Goodman voicing man-child Fat Freddy Freekowtski, and Pete Davidson voicing paranoid Phineas T. Phreakers. Also in the voice cast are Tiffany Haddish, Adam Devine and Blake Anderson.  Savage voices a tech badass named Harper, while Anthony voices social-advocate lawyer, Gretchen.

Speaking of the ACE Eddies tomorrow, Saturday, April 17, Netflix has been doing a series of videos based on their craft nominees, called “The Backdrop,” and one of them is with ACE Eddie and Oscar nominee Alan Baumgarten where he talks about the editing for the 6 1/2-minute opening scene for Aaron Sorkin‘s The Trial of the Chicago 7, which you can watch below.

Before we wrap things up with trailers, in case you’re interested in going to the movies this weekend, Neon is releasing In the Earth, the new eco-thriller from British filmmaker Ben Wheatley into theaters as the only new wide release of the weekend. We’ll have an interview with the director next week.

If you read my interview with Society of Camera Operators Camera Operator of the Year, Geoffrey Haley, then you may have already seen the newest trailer for Universal Pictures‘ F9, the ninth installment of the action franchise that celebrates its 20th anniversary this year.  If you didn’t read that interview, shame on you, but you can watch the new trailer below. Vin Diesel is back as Dominic Toreto with lots of his crew back as well, including Michelle Rodriguez, Jordana Brewster, Tyrese Gibson, Chris “Ludacris” Bridges and Sung Kang, and it introduces Dom’s brother, played by John Cena. It’s scheduled to open June 25 after being delayed from last summer due to COVID-19.

The other new trailer this week was the Teaser Trailer for Lionsgate‘s sequel, The Hitman’s Wife’s Bodyguard, starring Samuel L. Jackson, Ryan Reynolds and Salma Hayek, following up on the surprise 2017 action-comedy hit.  Its sequel opens on June 16.

A fashionable men’s clothing store hides deadly secrets in The Outfit, a new thriller from Focus Features that opens exclusively in theaters on March 18. The film marks the directing debut of novelist/screenwriter Graham Moore (The Imitation Game) and stars Oscar winner Mark Rylance (Bridge of Spies) as Leonard Burling, who prides himself in being a “cutter” rather than a mere tailor. Moore and Johnathan McClain co-wrote the script, which […]

Veteran post-production executive Mark Kaplan is joining Goldcrest Post as Executive Vice President. The highly-regarded industry pro will be tasked with growing the facility and attracting more work from both inside and outside New York City, including Los Angeles and London. He comes aboard the facility after 20 years at Technicolor, Los Angeles (now Formosa Group), where he was Vice President of Broadcast Sales. “Mark is a dear friend, and […]

Grammy winner and Oscar-nominated composer and musician Terence Blanchard was announced today to as the recipient of the Toronto International Film Festival‘s TIFF Variety Artisan Award at this year’s TIFF Tribute Awards. The award recognizes “a distinguished creative who has excelled at their craft and made an outstanding contribution to cinema and entertainment” with Blanchard having received an Oscar nomination from the Academy of Motion Pictures and Sciences last year for scoring Spike Lee‘s BlackKklansman. Besides that […]