News Ticker
En route to the Oscar City this year – as we might as well call the many cordoned-off blocks of Hollywood – traffic was held up further as the LAPD flagged people to a standstill so that a sea of green could cross against the light and take their places near Hollywood and Vine – just outside the perimeter of Oscar City itself.

The green-clad group was there as part of the second annual protest of VFX workers decrying the outsourcing and subsidizing of work elsewhere. In Los Angeles the contradictions were immediate: Money will be spent on perimeters, corridors, cops and traffic management because “Hollywood” (i.e., Los Angeles, and presumably California itself) loves the idea of movies, the symbolism of them. They certainly won’t let Oscar be held anywhere else.

So why does the work flow away so easily?

Or perhaps a near-century of Oscar, and movies, has been so successful that “Hollywood,” as a state of mind, is everywhere now, and there’s no turning back.

That was certainly one of the themes of an evening that saw above-the-line awards divvied up among a few strong contenders, while director Alfonso Cuaron’s Gravity dominated in below-the-line categories.

Of course Gravity had to wait for lift-off, as the first craft award went to Adruitha Lee and Robin Mathews for makeup and hairstyling on Dallas Buyers Club.

Jerod Leto had already won a supporting actor statue for playing the transgendered Rayon in that film, and talked about his work with his micro-budgeted collaborators. “They had a [makeup] budget of $250. I’m not joking. That’s the truth. And they worked the hardest out of anyone on the entire set. Makeup, hair, they’re always the first to set in the morning. I don’t know if you guys probably know this. They show up at the crack‑ass of dawn, and they leave at the crack‑ass of dawn. They’re there all the time and they were tireless, tireless workers. And essential to the building of these characters and performances.”

And when Lee and Mathews came backstage after their win, they confirmed the spare-change size of the budget: “ I had a $250 makeup budget… I had to figure out how to make it work.  So I went back to old‑school techniques, you know, back to stuff they did in the silent days – highlight and contour, paint and powder, out‑of‑the‑kit tricks… I did a lot of research on AIDS in the ’80s and saw that they had this rash that had little yellow pustules on it. I could figure out to do the rash, but I couldn’t figure out how to do the little yellow pustules.  I said, maybe it kind of looks like grits and cornmeal, maybe powdered milk. And I just experimented on my hand, until it got the right composition and took a tweezer and did one piece of grit, one piece of cornmeal over and over again until the color was right.  And it looked great.” And before Gravity could really take-off, Baz Luhrman’s take on The Great Gatsby won the first of its two awards – for Luhrman’s wife, Catherine Martin, nominated as both costume and production designer for that film. How did it work for her wearing both (stylized) hats? “I think that the language of clothes and the language of environment work hand‑in‑hand as story‑telling tools in what is a visual medium, and it’s certainly something that Baz considers down to the very last detail,” she said “It’s quite good (that both positions are) the same person.  Even though it can be schizophrenic at times, you’re arguing with yourself.”

But then Gravity kicked in a big way, grabbing its foregone visual effects Oscar, for VFX supervisor Tim Webber and his collaborators.

While the VFX team oddly never wound up backstage for a press interview, their onstage thanks went to the actors as well, along with their director, Alfonso Cuarón, DP Emmanuel Lubezki, and the shooting crew. Later special effects supervisor Neil Corbould told us: “To win tonight has been a career high and to be there with such an amazing film has been fantastic. I am so proud to have been involved with Gravity and to have worked with a movie genius that is Alfonso Cuarón and an amazing British producer David Heyman. My dream has come true!”

On stage, Webber & co. also thanked “George Clooney and especially Sandra Bullock for filling our visual effects with life and with emotion,” essentially making the same point as the earlier winners that you finally need actors to fill that make-up, those roaring ’20s clothes, or those spacesuits.

The crew, though, could be anywhere, and if you’re keeping track from an L.A. perspective, the winners thus far were shooting in Louisiana, working in Australia or based in London. 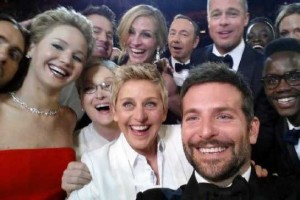 It was probably no accident then that one of the biggest bits of the evening, host-wise, involved Ellen DeGeneres’ use of Tweeted selfies, including her now already-infamous gathering of A-listers near the front of the stage. The idea of movies may have started here, but – as with Tweets, Instagrams, Facebook posts, and more – everything is everywhere now.

Even the images of Hollywood stars escapes the broadcast screen for appropriation by re-Tweeters around the world.

And more of that world kept figuring in the night’s wins. There was a question from a Chinese journalist, for example, to the winning producers of animated film Frozen about when co-productions with China would begin, which was politely dodged.

And then Gravity pulled down more awards, including both in the sound categories, and finally the expected cinematography award for Lubezki.  When Lubezki came backstage, he was accompanied by the film’s winning editors – Mark Sanger and director Cuarón himself.

Indeed, it’s probably no accident that once again the VFX and cinematography statues go to the same movie, as they did to last year’s Life of Pi.

It is part of the inexorable change in how movies – especially big Hollywood ones – are made. 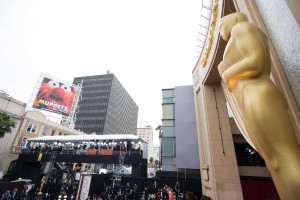 Indeed. Though as Bob Dylan once sang – in those days before he pitched cars on TV – you can tell which way the wind blows, without having to wait another billion years or so.

By the time Cuarón returned to the press room as this year’s best director, he was asked by a BBC correspondent if his win showed the current strength of the British film industry. For Cuarón, currently living in London, he thought it was “very obvious.”

“Definitely the amazing know‑how quality and sophistication of the British film industry made this film happen.  I’m talking specifically about companies like Framestore or the amazing crew that I worked with.  This is the third film that I have done in the U.K.  I have done more films in the U.K. than in any other country in the world. And the amazing thing is that the British film culture is in as good shape as the American industry right now.”

And then he added a need – referencing his home country of Mexico – for “more venues, more support and more incentives, I think.”

Incentives, indeed. Though they seem to mostly flourish everywhere else but Hollywood, as the evening indicated.

In fact, when Academy president Cheryl Boone Isaacs came on to tout the opening of the Academy’s motion picture museum as a world-class tourist destination, she said “Let’s all meet there in 2017.”

And certainly, those looking for that idea of “Hollywood” – or a place where those A-list selfies are the stuff of actual waking life – will come, like they came to that Iowa cornfield in Field of Dreams.

But who knows how much movie making, or how much postproduction they’ll find here when they arrive?

Finally, a couple of quick above-the-line notes: Best supporting actress winner Lupita Nyong’o confirmed in her backstage talk with the press that she is as entirely charming as you already suspect.

And regarding best picture winner 12 Years a Slave (also filmed in Louisiana, though much of it is actually set there), director Steve McQueen said “You know, if we don’t know our past, we’ll never know our future.”

And there’s a lot of future out there, as Jonze had noted earlier.

It’s just that no one knows what that future holds, really, for the town where Oscar was hatched.

And the winners of the 86th Annual Academy Awards are:

Performance by an Actor in a Supporting Role

Achievement In Makeup and Hairstyling

The Lady In Number 6: Music Saved My Life
Malcolm Clarke and Nicholas Reed

Performance by an Actress in a Supporting Role

Her
Written by Spike Jonze

Performance by an Actress in a Leading Role

Performance by an Actor in a Leading Role

Best Motion Picture of the Year