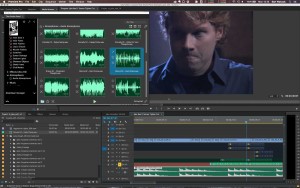 San Francisco-based technology and postproduction company THAT Studio will showcase THAT Studio Effects, its comprehensive library of practical effects and assets at NAB next week. A new THAT Studio Effects Panel provides easy access to practical effects and assets inside Adobe Premiere Pro CC and After Effects CC. Editors, VFX artists and independent filmmakers now have access to a complete repository of high-quality tools to enhance their creative work that they can preview, buy and use within their Adobe applications.

Co-founded by entrepreneur and filmmaker Kanen Flowers, THAT Studio is building a reputation as the go-to source for filmmaking tools developed by practitioners and tested daily in real-world production conditions. In addition to offering resources for video professionals, THAT Studio is a successful production company with a unique, distributed pipeline and artists based around the world.

“I used THAT Studio Effects on The Hunger Games: Mockingjay – Part I to add smoke, fire and muzzle flashes to my timeline,” said Alan E. Bell, ACE. “Having the ability to embellish the cut with great effects is a no-brainer and I will use these tools on all my shows in the future.”

“Our goal was simple — make the whole bundle cheaper than it would be if you had to go out and shoot just one of these effects yourself,” said Flowers. “When we need an effect, we go out and shoot it ourselves. This is how feature films and television do it and it’s the right way to make effects look real, but not everyone has the resources or the time to do that.”

Designed and tested from the user’s point of view and to eliminate the need for artists to patch separate technologies together or search around on hard drives, “THAT Studio Effects doesn’t just give you a bunch of files,” explained Flowers, “it delivers a workflow.”

“It allows everyone who sits down at the edit station to quickly get to the footage without ever having to move too far from the timeline,” said Ko Maruyama, creative director and lead animator at Treelined Media. “Whether an assistant editor or a lead editor starts the job, the huge array of footage options allow everyone to quickly extend the potential of the cut. The clips are real footage, of practical elements, and are unlike digitally created elements. THAT Studio Effects footage looks real because it is real.”

Purchase includes lifetime updates and downloads of new effects in the purchased bundle. The complete library is available as high-quality QuickTime files, which are integrated directly into an Adobe Premiere Pro and After Effects panel.

THAT Studio is bringing six other products to NAB.

An innovative approach to color correction and grading, that features 100 corrections and pre-built Looks, allowing a unique color scheme to enhance your film, while providing a simplified toolkit for complex tasks like shot matching and balancing. Pre-built Looks provide a way to give images a more striking look and feel.

“THAT Studio Color was developed by a colorist, not just a coder.” said Flowers. “They are precisely crafted tools that let you apply the right looks to add punch and emotional impact to your projects.”

This is a new library of royalty-free music for film and television that can be used as background music for drama, suspense, comedy or horror films. With 50 atmospheres designed to move your story forward, each atmosphere is a wave file that comes with its stems. The atmospheres are created by award-winning composer, Jesse James, who has scored film and TV. James will be at the THAT Studio booth during NAB to speak with visitors.

THAT Studio Presets for AE

More than just a collection of knobs and buttons, THAT Studio Presets are handcrafted After Effects Project files with high-quality images and layers that make sense and are easy to use. They allow motion graphics and visual effects artists to add film grain, film scratches, lightning strikes, smoke, fire and more to their After Effects compositions.

The first That Studio collection for Final Cut Pro X includes over 100 different practical visual effects, that are automatically composited into any scene. Users simply drag the effect into their footage and choose the type of effect they want, such as fire, smoke, dust, lightning, lights or many other options. Footage is instantly transformed into a powerful, pre-composed shot thanks to these single-click visual effects.

With Conform Studio, users can automatically pre-compose their shots, batch rename them using customizable presets, extract compositions into separate files and trim the media to reduce the amount of data they distribute to their artists. After the work is done, compositions can be replaced with rendered files, automatically updated to the latest version, or the renders can be replaced with graded files from another folder.

Trim N Collect allows After Effects artists to trim and transcode all of the media clips in an Adobe After Effects project, automatically gathering only those required and relink to these files. Additional options provide control over the size of handles that remain, processing of image and multi-channel EXR sequences, as well as how the files are collected. This offers a single-click solution for streamlined collaboration, delivering projects to clients and partners, or archiving completed work.